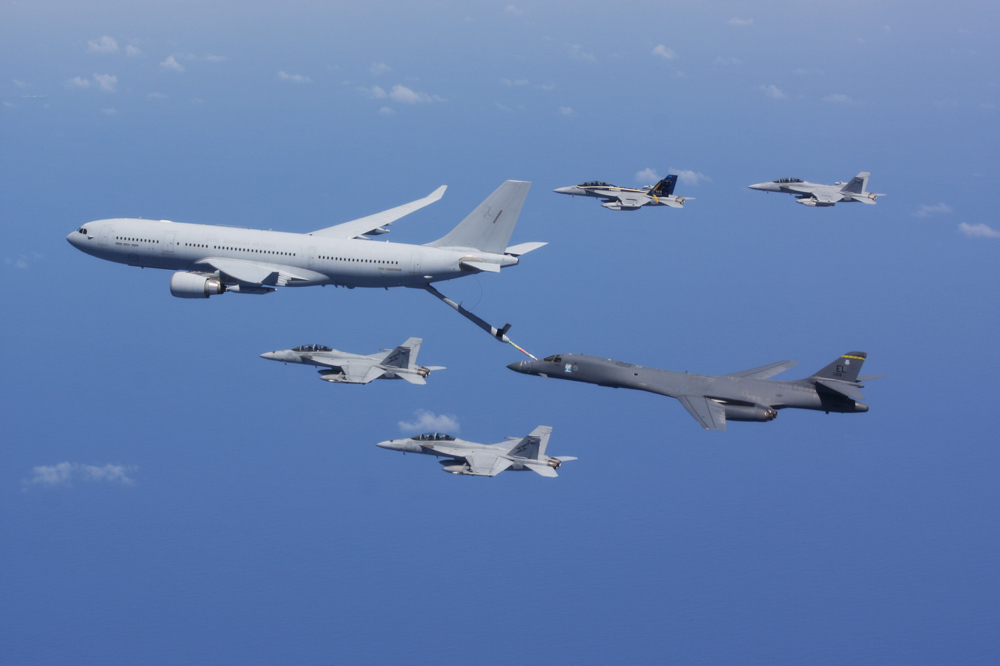 During my visit with Murielle Delaporte to RAAF Base Richmond we had a chance to discuss with the new Air Mobility Group (AMG) Commander his perspectives on the way ahead.

A key point to underscore is that the RAAF, like the USMC, is focused on ramping up combat capability for the operational force, rather than being focused primarily on a process based approach which requires  a long list of process-driven requirements.

It is an attitude of get the new equipment into the hands of the warfighter and let them work the operational innovation.

Air Commodore “K-9” Kourelakos underscored that the RAAF relies on a risk-management approach as the warfighters work through the use and evolution of new equipment, in order to get it into the force as rapidly as feasible.

“We do a good job of teaching our airmen and airwomen to think about risk management. As they’re going through hiccups and dealing with problems, they are asking a key question: “Can we actually do this? And to do so, what kind of risk are we taking?”

“If they think it is something really serious, they’ll put the flag up and highlight their judgment that we should not go ahead with a specific action.

We discussed with the Air Commodore his sense of how the Group has evolved over the years and what the next steps will be moving forward.

He has been involved with RAAF C-130 operations from the start in the Middle East, and emphasized that the RAAF brought C-130s to the Middle East and operated them locally and have done so for more than 15 years.  They worked with allies and jointly work to sustain the force.

With the coming of the C-17 and then the KC-30A things changed fundamentally as the capability flew into theater and out again as the operational schedule and rhythm dictated.

He noted that with the KC-30A they brought a multi-function aircraft into the mix, not a narrowly specialized tanker.  This has meant that they have worked through ways to work the C-17 and KC-30A in support packages for the Australian Defence Force (ADF) in the Middle East and elsewhere.

“We put the KC-30A into theater in what some would say was an early timeline, but given our effects-based approach, we deployed the aircraft and sorted through the challenges and got significant combat effect from deploying the aircraft prior to achievement of its Final Operating Capability.”

He underscored that the operational experience in the Middle East for the tanker crews has been very significant in shaping the next chapters for the tanker within the ADF.

“They learned how to function effectively in a dynamic area of operations.”

So what are the next chapters in the tanker story, from the perspective of the Commander AMG?

First, what is next in the Middle East?  “We have deployed a single tanker full-time for the past three years in the Middle East and we are shifting to a more periodic engagement and we shall work that operational challenge. The impact of continuing this engagement for a long time has yet to be seen or learned.”

Second, the boom operations for the tanker will go up dramatically in anticipation of the F-35 operating in Australia. This means that they are ramping up their certifications and training with small receivers like the F-16 in order to prepare for extensive support to the Aussie F-35s.

This tanking will be done largely over Australian territory and working through support of the F-35 will be a major effort over the next three years as the fighter comes on line in Australia.

Third, the RAAF is rapidly expanding the number of types of aircraft for which the KC-30A has clearances.  And this is seen by the RAAF as a key part of supporting allies in the region, notably PACAF.

“A key strategic objective of our alliance with the United States is our ability to be interoperable and with regard to tanking this means working the clearance process for tanking fighters and other aircraft. If you get into a high-end fight you need to leverage every advantage that you can in order to prevail.”

Fourth, a part of building out that combat advantage is the coming of the robotic boom to the KC-30A.  In part it is a safety enhancement, functioning much like an auto-pilot, but it is a work in progress to sort out how the robotic boom will actually operate and be used by the RAAF.

But there is a clear combat advantage which will come with enhanced capability to fuel air assets more rapidly and safely.

“With a robotic boom, you are increasing your combat capability through enhanced efficiency.  You can also achieve a reduction in maintenance as you work through ways to efficiently operate the the boom..

“What we are talking about is taking force projection to a new level.  If you can have our fighters on station-longer and delivering combat effects, because you can tank them more rapidly, that will be a significant gain.”

“We are a small Air Force.  If you look at the history of small air forces, they win or lose on the first day. You want to be ready for the first day.

Having digested the operational fundamentals with the tanker, the RAAF tanker program is now moving on to the next phase, one could call Tanker 2.0.

The baseline tanker is fully functional; now what other capabilities can be added to it as it moves beyond being a gas station in the sky?

That is a work in progress which the Air Mobility Commander and his staff along with the other MRTT users as well as Airbus Defence and Space are engaged in realizing.

The B-1B Lancers participation in this exercise was part of the Enhanced Air Cooperation program, which aims to increase the interoperability between Australia and the United States.