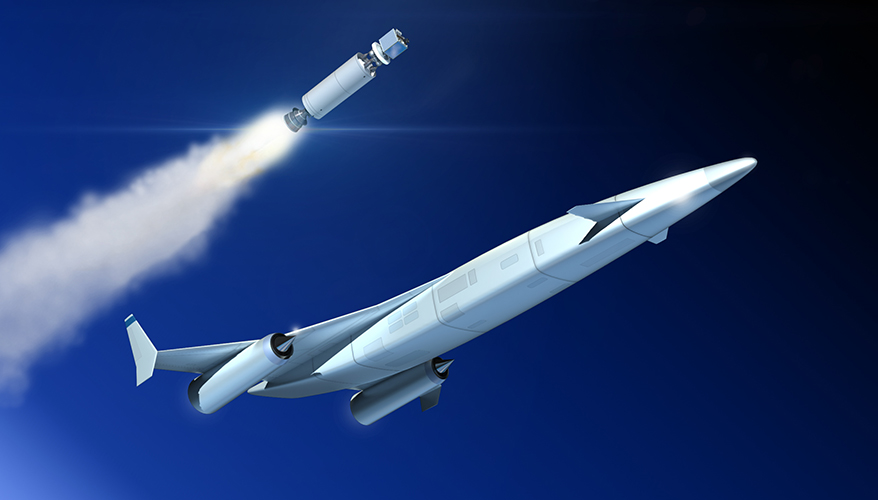 In an article published on April 24, 2018, Stew Magnuson provided a look at the UK development of a hypersonic engine.

The US could clearly leverage what French, UK, and Australian allies are doing in this area, but the US needs to change its quite narrow approach to not invented here and the heavy hand of defense protectionism which undercuts the capabilities of US forces, and puts them at unnecessary risk.

Watching what has happened with tanker and the endless “experiments” on light attack aircraft, when the A-29 is the obvious answer, are simply two examples, but there are many, many more.

Let us not do this yet again in an area vital to US and allied security as clearly hypersonic capabilities clearly are.

A next-generation engine that its British designers say could go faster than Mach 5 will be partially developed in the United States to meet the military’s need to reach hypersonic velocities.

The Synergistic Air-Breathing Rocket Engine (SABRE) is being called a hybrid jet and rocket engine that combines the best features of both technologies, its developers said April 19 at the Space Symposium in Colorado Springs, Colorado.

Reaction Engines on April 12 announced further investments in the company from industry heavy-hitters Boeing, Rolls-Royce and BAE Systems along with some seed money from the Defense Advanced Research Projects Agency.

The U.S. government is making development of hypersonic vehicles a top research-and-development priority in light of recent Chinese and Russian advances in the field, although Adam Dissel, president of Reaction Engine’s U.S. subsidiary, said the SABRE can do a lot more.

It is being envisioned as part of an aircraft that could start on a runway and accelerate to five times the speed of sound. After reaching Mach 5 it switches to rocket mode. “So you have a single engine that, in theory, can take you from the runway all the way to space,” he said. “It combines the best parts of a jet and the best parts of a rocket engine,” he added.

One of the key pieces of the technology is the pre-cooler, which enables the engine to move at higher speeds without air friction melting its parts, he said. “It’s like a big fancy refrigerator on the front. It quenches the incoming air, steals all the heat out of it, so the core engine can use that air without melting — simplistically.”

The technology then takes the energy it has stolen out of the air and injects it into the engine to drive the machinery, so it is regenerating what would otherwise be wasted heat, he said. The temperature inside the engine reaches 1,800 degrees Fahrenheit. The pre-cooler is supposed to reduce this by 1,300 degrees in one-twentieth of a second.

To prove that it can do this, the company is setting up a test facility for the pre-cooler east of Denver, Colorado, that can blast it with 1,800-degree air. The facility will be stationary but it will match the temperature and other conditions found in flight and prove the first third of the engine’s capability. “It doesn’t have to fly Mach 5 to replicate what it would see after the inlet. So basically we are going to give it the conditions that we would actually see in flight,” Dissel said.

A separate facility is being built in the United Kingdom to test the engine core by 2020, he noted. That core contains what he calls the technology’s DNA — “the thermal cycle that is specific to a SABRE that enables a SABRE to be a SABRE,” he said.

The inlet and the rocket combustion chambers in the back have been developed and proven by industry. The pre-cooler and the engine core have not, Dissel said. “We are really trying to prove out the parts that are the most innovative and the most new in the quickest timescale,” he added.

BAE invested 20 million British pounds in 2015. Boeing HorizonX Ventures and Rolls-Royce added to this along with a second round of funding from BAE. The three companies’ investment this year totals 26.5 million pounds. The U.K. government has kicked in 60 million pounds. DARPA has provided some funding for the pre-cooler tests, although Dissel declined to disclose the amount. In total, the company has raised 100 million pounds since 2015, a press release said.