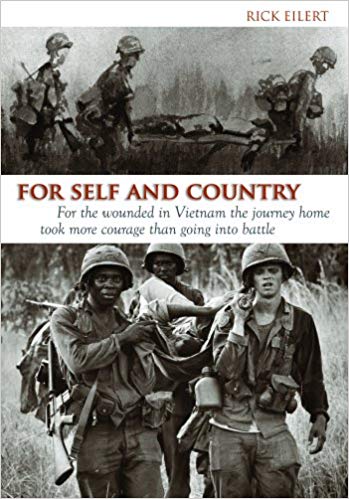 We published a piece on June 11, 2011 which remembered the life of Rick Eilert (USMC) retired which was entitled For Self and Country: For the Wounded in Vietnam the Journey Home Took More Courage Than Going into Battle.

According to Rick Eilert, he described the context of his book as follows:

The average age was 19.2, so in the main, the War was fought by 17, 18, 19 and 20 year olds barely out of high school and often without the income, intelligence, inclination, or focus to attend college. For everyone, the draft loomed large in our futures, so you could choose your branch of service or let the draft decide for you.

Fresh from sock hops and college freshman mixers, young men found themselves in a fight for their lives, from the Delta to the DMZ, on animal trails, numbered hills and in remote jungle outposts. Teenagers witnessed the unspeakable carnage of war while trying to understand the collision of emotions and insult to the senses that is combat.

Thousands died there and many thousands more were wounded and maimed.

So the hell of combat was replaced by the painful recovery in a military hospital. For me and thousands of others it was Great Lakes Naval Hospital at Great Lakes, Illinois.

For Self and Country follows my many months of recovery along with the stories of the brave young men who surrounded me and sustained me with friendship, uncommon humor, and courage.

This is a story of family, young love, and the magnificent care administered by the Navy doctors, nurses and revered Corpsmen. Great Lakes was a place of great pain but also recovery, not just from the physical damage we sustained but also the unseen emotional injuries everyone endured but rarely talked about.

We helped each other in our recovery by talking to each other about our wartime experiences and how we would need to cope outside the insulated and protected hospital.

Most of us had no expectation of surviving Vietnam; now that we had we were unsure what place we would have in civilian life.

Rick Eilert was one of “Corson’s Boys,” and Markley tells their story.

There are many people who have Bill Corson stories to tell. They are former Generals and they are former Privates. They are usually Naval, C.I. A., or Marine Corps personnel. Bill’s stories were told after that second or third martini had loosened him up. Lunch with Bill at the Hay-Adams was an event we all looked forward too. Bill’s exploits are legendary and in a different time were the stuff motion pictures were made of.

I served under Lt. Co. William R. Corson for a very short time at 2nd Combined Action Group. I saw him in and around the old French Fortress Compound that was home for 2nd CAG Headquarters. In the middle of a war, Lance Corporals i training and Lt. Col.’s in command don’t have occasion to sit down and visit. Bill went back to Headquarters Marine Corps and I went out to CAP Delta 4.

Years later I found myself farming in Minnesota. I was trying to put my Vietnam experience in perspective by reading about the war, but farming consumed a great deal of my time. One day I was browsing the shelves of the Northfield library and found a copy of Bill’s book “The Betrayal’.

I sat down that Saturday night and started reading. I didn’t stop until had finished the book. It was like a catharsis, everything we had tried and failed at in Vietnam was in that book.

The CAP units and the villages I had served in were mentioned extensively in the book. I had to talk to Col. Corson. It was Sunday afternoon and I started calling information in the Washington, D.C. suburbs. After placing only a few calls, I managed to find Col. Corson at home.

We talked for about an hour. He told me if I ever got out to Washington to give him a call and we’d have lunch together.

Over the next year, I talked to Bill a few times on the telephone. Then I made a trip to Washington lobbying for higher farm prices and grain trade with China. I had just returned from an agricultural tour of the People’s Republic of China and I was trying to promote grain trade with that government.

I called Col. Corson and we set an appointment to meet for lunch at the Hay-Adams. This was the first of many lunches we were to have there.

The Hay-Adams is an elegant place and the restaurant with its paneled wall is not the usual fare for a farmer from Minnesota. The lunch was quite good and after about the second, if you knew Bill probably the third, martini he started talking about ‘his kids’ who had served in CAP units.

Bill told one story about a kid who had started a hog farming operation with the local Vietnamese farmers in the village of Yen Bac. I had been on patrols through Yen Bac while serving with the 1st Anti-Tank Battalion on Hill 34 just Southwest of Danang. I knew the area and I knew of some of the CAP activities that had gone on in that area.

Bill’s eyes started to water and he told how that Marine had been killed.

It was getting uncomfortable at that point. Here was former Lance Corporal trying to console his former Commanding Officer. It was my first glance into the human side of Bill Corson but it wouldn’t be my last.

Over the next year, my best friend, and I really mean my best friend, Rick Eilert went to work on a book about our experiences while we were patients at Great Lakes Naval Hospital. I would get phone call from Rick late at night or in the middle of the day asking questions like, “what was the kid’s name that got run over by a tank?” or “who was the sergeant that was in traction next to Greg Martin?” Finally, in I believe 1981, Rick flew to Minnesota with this manuscript in hand.

I picked Rick up at the airport in Minneapolis and we headed for my farm near Dennison, Minnesota. Like all young farmers, I was extremely busy. I found myself reading Rick’s manuscript in my dairy barn while I was changing automatic milkers from cow to cow, leaving a few manure smudges of course.

When I finished the manuscript, Rick and I started racking our brains as to how we were going to get his book published. Rick had no agent and we didn’t even know any published authors, except one, I knew William R. Corson. We got on the phone and called Bill. He suggested we send the galley out to him and he’d take a look at it and critique it for us. We said that would be great but we were planning on going out to Washington, and we would bring the galley by his office.

A few days later, Rick and I flew out to Washington and met Bill in his office. I introduced Bill to Rick and we visited for a long time about the war and our various experiences. As we were leaving, Bill said he would take a look at the manuscript, manure smudges and all as soon as he could. We assumed that would be some time in the next few months.

For the rest of that day and part of the next day, we played tourist and visited some historical sites in Washington, including the Iwo Jima Memorial. We were both really moved by the Iwo Jima Memorial and it was noticed by our Vietnamese cab driver who refused to accept any money from us. He had been a Staff Sergeant with the ARVN.

The next day, we boarded a flight to Chicago. When we got back to Rick’s house, his wife Cheryl said some guy named Bill Corson had called and it was very important that Rick call him back. Rick looked a me and shrugged, then went to the telephone and called Bill.

When Rick got him on the phone, Bill proceeded to tell Rick he had sat down, picked up the manuscript and had not put it down until he had finished it. Bill also said he would not go to his grave before Rick’s book was published. He said he had some leverage with William Morrow & Company and that he was going to use it to get Rick’s book published, and HE DID JUST THAT!

There are several other stories of how Bill helped Rick and me. He helped us secure employment in Veterans’ Affairs. He helped us cut through Washington’s ‘red tape’ if we asked for help and it was humanly possible Bill was there for us. We are not an isolated example of this side of Bill Corson. It was a part of who he was and how he felt about “HIS KIDS!”