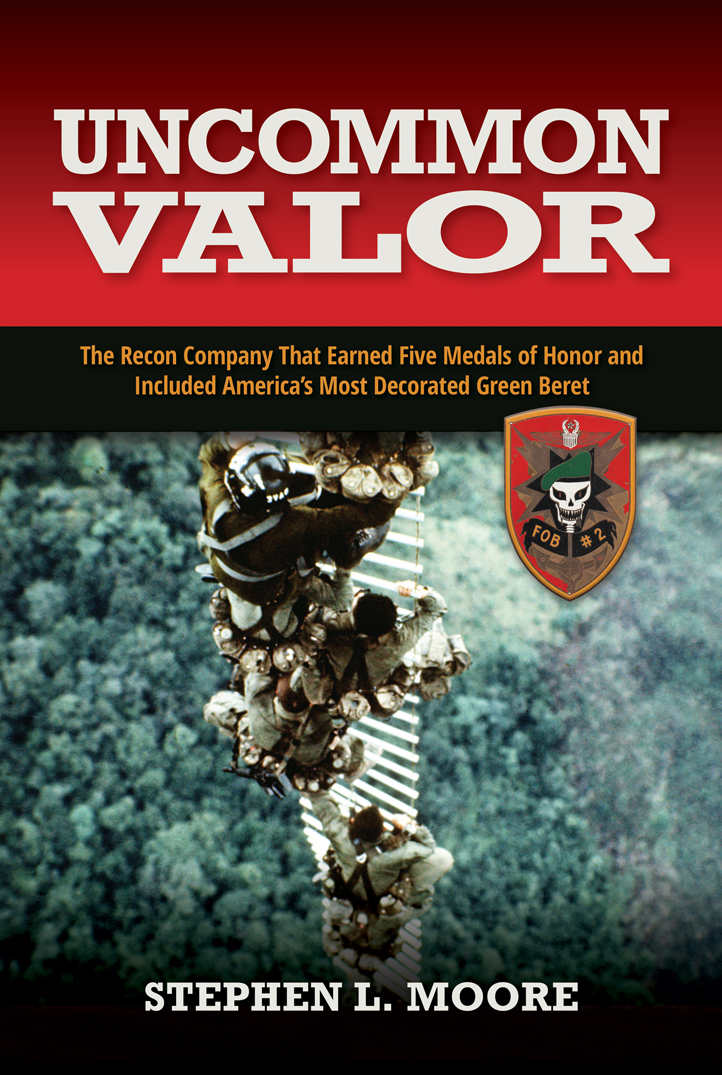 We are all enthralled reading a Tom Clancy novel or watching the latest Mission Impossible.

Tales of going up against the enemy engross us.

In this book, the author provides such tales, but these are not fiction.

In Uncommon Valor:Stories of American Heroism, — The Recon Company That Earned Five Medals of Honor and Included America’s Most Decorated Green Beret, the author tells the story of the formation and operations of an advanced Special Forces reconnaissance company during the Vietnam War.

Moore does an exceptional job of making every anecdote come alive and relaying the stories of the 100+ veterans he researched in a way that brings new meaning to “humanity behind the hardware.”

He reminds his readers that war is so much more than black and white and invites us into the daily life of what it was like to be selected for this elite Kontum based recon company.

Codenamed Studies and Observation Group(SOG), men were told from the get-go how dangerous the missions they would be undertaking were.

“One of those two men beside you will be dead at this time next year.”1

After a quick smoke break, most men decided to take the leap and accept the year-long mission that would be conducted “across the fence” – deep into enemy lines.

All three teams had seen combat prior and went straight to it while five other teams were to complete their training.

Each unit was headed by an experienced master sergeant and each team came to represent heroism in their own way.

Team Ohio, looked over by Master Sergeant Meadows, had a high success rate with their missions “centered around their boldness, their training, and the proficiency of each man on the team.”2

Each team was different with the ways in which they trained, ran missions and lived their experiences out.

They were different even down to the way they prepped new team members.

For example, Meadows “schooled his team around a sand table mock-up of their area” and each member “had to be able to point out LZ sites and alternates where they would meet if the team had to split in the field”, while other teams such as the one ran by Gerry Wareing would “just grab his team, tell them they were going to go out and that was it.”

His success with his team members was not as high– “he got a new team every time he went out” because “they wouldn’t go with Wareing again.”3

The missions were completed, all the same.

Reading through this book is like being allowed to sit in on the interviews themselves: there are no filters and no barriers between you and the warriors.

What you see is what they got.

Being able to have such an inside look on such a top-secret organization is something of a rarity.

Moore’s insurmountable efforts to thoroughly investigate the eight year existence of SOG and keep track of the 7,800 men that took part and “received more than two thousand individual awards for heroism” (335) makes this book unforgettable.

The success rate of the Green Berets, the loss being 150 to 1 (ratio of NVA soldiers to Berets), is only the cherry on top of a cake filled with “a collection of heroes.”

As a member of a generation much younger than that of the Vietnam generation, this book allows me to better understand the challenges facing my father’s generation in combat.