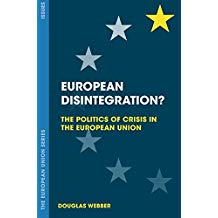 Douglas Webber in his book published this year on the politics of crisis in the European Union looks back over the past decade to assess the nature of the crisis facing the European Union and how key coalitions might shape its future.

As an aside, one should note that Webber’s book is a bit of an anomaly in the academic literature on the European Union.

The academic assumption has been the great march forward with regard to integration, which, of course, raises an even more fundamental question about why academic research is often a self-licking ice cream cone.

Webber is to be credited with actually looking at reality and asking some good questions about the crises and how fundamentally they are changing the way ahead for Europe.

He argues that the European Union has a long history of crises; but that the quadruple crises of the recent past are concurrently challenging the integration path.

Those crises are the Eurozone crisis, the migration crisis, the Ukrainian crisis and Brexit.

He argues that Germany has been the clear leader of Europe but that it is only a semi-Hegemon and has provided important but limited leadership across the spectrum of these crises.

One could also add that we are talking about Chancellor Merkel and her governments, which are increasingly challenged to govern Germany let alone lead Europe.

Because of the central role of the German economy in Europe, the Eurozone crisis has been largely managed by Germany; in the Ukraine crisis, Merkel talked frequently with Putin and the German government worked to shape a broader European solution.

Along the way she decided to attack Putin publically, something which seems to have been put aside for the Nordstream II deal.

With regard to the migration crises, this has blown up as a full scale set of national conflicts, which really are rooted in the decision to have a free zone of movement but without a clear capability to impede the deluge of refugees from the Middle East.

And the Chancellor sought a German defined European solution which certainly has led to further fractures in the European Union.

With regard to Brexit, the German government helped create the crisis by failing to work with PM Cameron when he was looking for a relatively modest restructuring, but in the crisis has essentially followed or supported a relativly hard line toward the United Kingdom.

The author certainly hopes that further EU integration will occur but comes closer to our work on what we refer to as clusterization within Europe rather than continuing the long march of Brussels led integration.

The author projects two core groups which could shape the next phase of integration.

The first could be a deepened Franco-German partnership.

The second could be a deepened German working relationship with the new Hanseatic league players, the Dutch and the Nordics and of course the UK can come through the back door.

The third possibility which seems highly unlikely given the nature of the crises which have shaped Europe over the past decade, namely a suprational (I almost wrote ‘supernatural’) great leap forward.

For me, one of the key issues is the Polish-German relationship and how that shapes a way ahead.

And here the fight over “European values” is important but even more so with whether or not Germany is serious about the direct defense of the Central European region.

While it is I am sure invigorating to attack Donald Trump, the problem for Merkel is that the Poles trust the Donald more than her to stand up to the Russians.

Or put another way, with the migration crisis raising fundamental questions of security and the Russians generating both concern and the rebuilding of defense in several parts of Europe, the questions for which the EU has never been very good, namely security and defense will have a determinate impact on the way ahead for European collaboration.