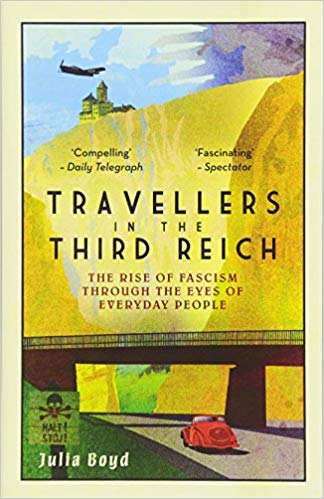 It was once said that without background music it is hard to know what is happening right now in your life.

This certainly applies to current history.

We are clearly going through a profound historical change that could turn out in many different ways.

A good reminder is to read history without the benefit of interpretating the options without having those judgements dominated by the benefit of hindsight.

“Without the benefit of hindsight, how do you interpret what is right in front of your eyes?”

A very impressive book published in 2017 by Julia Boyd provides a way to put the reader inside the evolution of the 1930s in Germany via providing interpretations year by year of the 1930s by a wide range of travelers to the Third Reich.

A much ignored aspect of life during the Reich was that foreign visitors often came to visit.

This was different from Soviet Russia, and more like Communist China.

These visitors came to learn about the new regime and to remember and honor German culture and its accomplishments over the decades.

It was also a decade for old soldiers to visit and to try to keep the peace, or alternatively, to honor the rise of fascism in Germany.

This is how the author explained her book:

If you want to know what it was really like to live in a period of history other than your own, there is surely no better way than to immerse yourself in the letters, diaries and memoirs of that time – particularly those written with no thought of publication or posterity. Tucked away in the manuscript collections of countless libraries and public record offices – and quite possibly in your own attic – there exists a wealth of this raw, unfiltered history waiting to be uncovered.

While such material is unlikely to cast light on international treaties or government policy, it does give the would-be time traveller an unrivalled sense of the period in question, its mood and vision, humour and touch – even smell. When I was researching Travellers in the Third Reich, one ninety-seven year old lady I interviewed recalled being overwhelmed by the stench of ‘sweat, feet and high leather boots’ as she made her way through crowds of swastika-waving Hitler supporters in Bayreuth. The importance of these records lies not in the quality of the writing nor the author’s brilliant perception, but in the fact that they were written there and then, without benefit of hindsight.

While it is reassuring for those of us who care about such things to know that so much grass-roots history survives, the problem remains of how to track it down. In my own case, a number of my most rewarding finds have been the result of sheer luck. A random conversation at a party or a chance encounter on an aeroplane has led to a remarkable diary or a clutch of revealing letters. Then there are the hours spent either trawling the Internet looking for clues, or hunting down every possible reference, no matter how insignificant or unpromising.

For an archives addict like me, time used in this way is pure pleasure despite frequent disappointments, many dead ends and the fact that even when you do find relevant material it is often boring, repetitive or banal. But then, just at the moment you are about to give up after a fruitless day working through endless boxes, you open a file of un-catalogued papers and find yourself instantly absorbed in a total stranger’s life. If you are lucky, out of all the mundane detail will emerge some incident, name or experience that provides an exciting new insight. To most people, your ‘discovery’ may seem ridiculously unimportant but for just a brief moment you feel like Christopher Columbus.

Of course it is not only unpublished material that throws fresh light on the overlooked corners of history. Long-forgotten books, obscure publications (such as The Regimental Chronicle of Prince of Wales Volunteers; South Lancashire) and newspaper correspondence columns are all indispensible sources for this kind of history. A glance at the letters section in any 1930s provincial newspaper is a sharp reminder of just how much our convictions, assumptions and ethics change from one generation to another. So next time you feel the urge to chuck out all those cobwebby letters crammed into decaying cardboard boxes in your cellar, I beg you to think again.

This is a brilliant book.

For it does what is often lacking in the historical consciousness of our times — put us squarely within the context of a period and restores the context within which judgements were being made, rather than writing God-like about an historical period, certain of its outcome and its meaning.

The problem is also that history is always a bundle of possibilities, roads not taken and taken.

And when one historical period is fading away, choices evident in previous periods but not followed often reappear and themselves become dominant.

History is never finished and only the arrogant assume that the way we live now is the acme of human progress.

The book provides a wide range of anecdotes along the way which highlight a sense of what travelers, famous and not so famous ones, thought along the way.

The book highlights British, American and Australian travelers to the Reich for the UK especially was a key target of Third Reich influence policies.

Indeed, a much neglected aspect of German policy in the period was the very effective effort to reach out into West European society to gain support for Germany and its rise.

Those efforts were of various types including subsidizing exhibits and studies in the period to support the rise of Germany.

The most visible of them was the Paris Explosion in 1937.

These efforts prepared civil society to understand the new Germany and for enough of the elites of Western Europe, sympathy to the point of support when the Blitzkrieg would come.

One of the key dynamics of the 1930s in Germany which really comes out through the diaries and comments of travelers in the Third Reich is the training of the youth in that decade to become ardent followers of Hitler.

But it is also to be seen against the decadence of the Weimar Republic and youth unemployment elsewhere and is viewed by many visitors within the context of the failure of the West to bring a future to their own youth as well.

Clearly, by the late 1930s, the nature of the regime was clear to any but those who wanted to support it

But throughout much of the period, the complexity of the revival of Germany by the new regime but the building of a new war machine on top of that revival lead to many complexities in interpretation.

The author concludes her book, she quotes the famous America black academic, W.E.B DuBois with regard to his judgment as of 1936:

“It is extremely difficult to express an opinion about Germany today which is true in all respects without numerous modifications and explanations.”

It is in this spirit that one anecdote caught my eye from the 1934 period.

The American Southern Baptists met in Berlin from the 4th through the 10th of August.

One attendee was Michael King Jt. who was so inspired by the reformist spirit he saw about him that he saw the Martin Luther spirit re-emergent.

Blacks in the Conference held in Berlin were not treated in a segregated manner, a fact noted by the German press of the day.