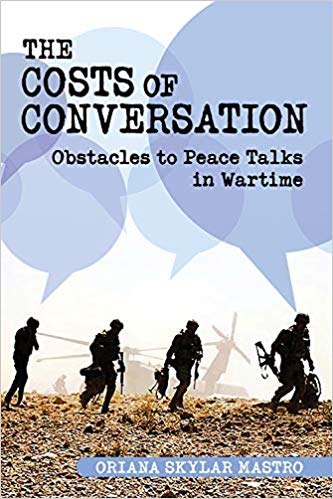 Oriana Skylar Mastro’s recently published book, The costs of conversation: obstacles to peace talks in wartime, is a tight, densely written piece of prose. Mastro is an assistant professor of security studies at Georgetown University in Washington and an officer in the US Air Force Reserve. In 141 pages—supplemented by another 45 pages of notes—she explores directly one of the key puzzles confronting intra-conflict bargaining: how to initiate peace talks without signalling weakness to an adversary.

Although we’re inclined to gloss over it—more readily fascinated by geopolitical transition, shiny bits of metal, and the mystique of the cyber world—ours is an age when the capping and termination of conflict has special importance. Since World War II, there have been strong incentives to contain modern warfare—by keeping conflict between great powers ‘cold’, and between smaller powers limited. In those circumstances, intra-conflict bargaining constitutes an important tool in the modern strategic toolkit, its importance increasing the further up the ladder of conflict one cares to look.

Over the years, academics have produced a range of detailed studies of specific negotiations. But Mastro’s research ploughs a largely unturned field: how adversaries get to the negotiating table in the first place. She explores four case studies—North Vietnamese diplomatic decisions during the Vietnam War; Chinese diplomatic decisions during the Korean War and the Sino-Indian War; and Indian diplomatic decisions, also during the Sino-Indian War—and concludes that negotiations will be acceptable to a combatant only when the costs of embarking on such a course are low. Agreeing to negotiations is always the first concession—one made before talks even begin. And it’s all too easy for adversaries to interpret an opponent’s sudden willingness to talk as a waning of resolve.

True, Mastro’s research is indicative rather than definitive: her findings are tied to four specific case studies, covering just three of the 38 instances of conflict identified in the Correlates of Wardatabase. Not being expert in the minute details of her case studies, I can say only that her argument—which turns upon the test of diplomatic openness—is both considered and intuitively appealing.

I’m more hesitant about the policy implications she unpacks in her final few pages. For her own country, and looking towards a potential conflict with China over Taiwan, Mastro urges a simple policy shift—that the ‘involved parties’ announce an openness to wartime talks as official policy before a conflict erupts. Assuming the parties include the US, China and Taiwan, that’s probably easier said than done.

She then considers the broader option of the US publicly announcing a new policy of offering talks from the first day of any conflict. But would that be credible? Would Americans have supported it on 12 September 2001? This year will be the 18th anniversary of 9/11, so some readers might have forgotten the political temper in the US at the time. For those who have, a quick dipinto the musical repertoire of Toby Keith offers a salutary correction. Mastro might well argue that her research applies rather more to state than non-state actors. But Pearl Harbor ranks up there with 9/11.

I accept Mastro’s argument that the stronger party is typically more willing to negotiate than the weaker. But it’s difficult to believe that even superpowers are always willing to negotiate. Such a policy shift is even less available to countries concerned about being on the wrong side of power imbalances—look at India’s behaviour in the Sino-Indian war, for example. As Mastro observes, the Indians never reached a position of diplomatic openness. China reached that position four days into the conflict—after both demonstrating initial military dominance on the battlefield and concluding that India had only limited scope to escalate even if it did interpret the Chinese offer as weakness.

Mastro’s complementary recommendation—that the UN offer its good offices to both parties from the first day of a conflict—suffers from a similar problem. Closed diplomatic postures aren’t principally the product of a lack of good offices, but of countries’ strategic assessments that bargaining is inappropriate to begin with. Ironically, Mastro’s difficulty in those concluding pages results from her attempting to identify policy solutions that swim against the current of her own research findings: combatants aren’t open to ‘costly conversations’.

None of Mastro’s four case studies involves diplomatic decision-making by a nuclear-armed state. But her general thesis—don’t agree to talks if doing so signals weakness—probably applies as well there as it does to conventional conflicts. Her final recommendation—‘that strong countries should reevaluate their tendency to rely primarily on coercion … to get an adversary to the negotiating table’—sounds like sage advice for nuclear-armed states confronting steep escalation ladders.

Perhaps official declaratory statements might have value in hard—nuclear—cases. But even there, likely adversaries should invest in actions as well as words, building arrangements—like hotlines—that facilitate top-level communication. And nuclear-armed powers should be encouraged to practise restraint in more demonstrable ways—rehearsing intra-conflict bargaining and war termination as part of their strategic exercises, and being seen to do so by likely adversaries.

Mastro has written a book of depth and nuance. It’s short, but can’t be read at a single sitting. It forces the reader to think about intra-conflict bargaining in a new light.

Rod Lyon is a senior fellow at ASPI.

This article was published by ASPI on September 4, 2019.