While the Cable Narrative Network can not contemplate a second term for President Trump; it is nonetheless a possibility.

In a piece published earlier this year, Greg Sheridan, the well-regarded Australian foreign policy writer for The Australian, considered such a possibility.

The only way to judge Trump, then, is on the basis of what he has actually done.

And here his record certainly has its negatives, but there is a lot to say in favour of Trump.

Much of what he has done, domestically and internationally, is what he promised he would do. He cut taxes and cut business regulation.

As a result, the US economy grew by 3 per cent last year, a fantastic performance. This resulted in a US unemployment rate of about 3.5 per cent.

It also resulted in a black unemployment rate of 5.5 per cent, the lowest since records have been kept.

The Economist magazine hates Trump with a passion and as a result cannot write intelligently about him. But before the latest crisis even it was pointing out that the US had never been richer nor more at peace….

Sheridan then concluded his piece with these comments:

Coronavirus and the Black Lives Matter demonstrations have hurt Trump and destroyed some of his achievements, especially in the economy.

But come November US voters will ask: who is best to lead economic recovery, who can safeguard us internationally, who can provide security and justice on our streets?

It is by no means clear, on the basis of his record, that Trump is the loser when those are the questions.

In a piece which I wrote prior to the 2016 election, I asked the question of what election in United States history did the 2016 election remind me of, a question simply ignored by the folks like the Cable Narrative Network because history is what they construct, not what they learn from.

This year’s campaign could well be the third wave election in American history.

The first wave was the collapse of the Democratic Party in the 1850s in front of the slavery challenge.  Lincoln challenged the the political establishment and came to power as the country faced Civil War.  The political process was reestablished after the Civil War but was very different from before.

The second wave was the progressive revolt of the 1890s against the corrupt political parties and the role of Theodore Roosevelt in challenging the political order and generating a process of change was significant.  The parties changed again as the political process was clearly ruptured.

The  book by Victor Davis Hanson on Donald Trump and American politics, has been updated with an epilogue written by the author in the Fall of 2019.

The book provides an excellent snapshot of Trump and the electoral landscape prior to the coming of COVID-19 and the return of 1968 style protests, associated with such manifestations as Black Lives matter.

What the book demonstrates is that virtually everything you have seen in the 2020 political circus was anticipatable from the fault lines prior to 2020.

The book highlights why Trump has significant support in the United States and continues to have so.

And if he loses the 2020 election, the Cold Civil War will continue because those who oppose the “so-called” progressives will not only continue to so, but are very likely to up their game.

This book is well worth reading on many levels, notably for those who really just do not grasp that a significant number of Americans really do not like the “deep state” and its manufactured answers to how we should live our lives.

What COVID-19 has introduced is a new and even more dangerous variant of progressive authoritarians.

COVID-19 is a nice excuse for politicians to invent new ways to control your lives: lockdowns one day; spending every day; and then openings on another day.

If this is following “the science,” we are the experimental rats.

In Trump’s favor, he turned over the management of COVID0-19 to the states and we have seen dramatically how the various state leaders can perform in a crisis.

The most meaningful statistical COVID-19 indicator is deaths within the general population, and even given how expansive the interpretation of who actually died from COVID-19 is, the United States is one of the most successful of industrialized states in dealing with the crisis.

One would be roasted by the gurus of CNN for such a statement, but there it is mates. 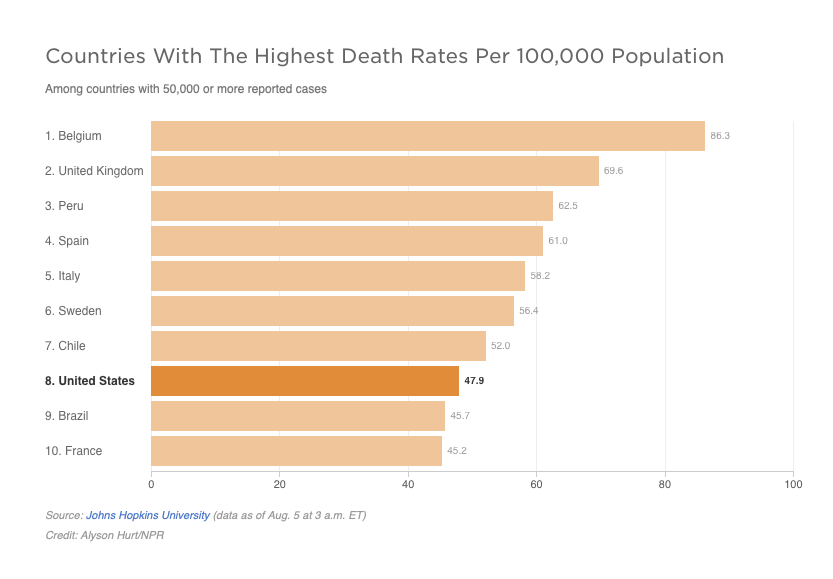 As Hanson noted in his epilogue: “As 2019 ended, the country remained as bitterly divided as when Trump entered office in January 2017.”

Without any doubt the “progressive assault” is only deepening the divide, and making a mockery of “we are all in this together.”

And turning American sporting events into a variant of the Berlin Olympics is not winning over sports fans.

To be clear, what I am referring to is using sports as soap box for whatever social message one wants to create.

This reminds one of the German government and its objectives in the Berlin Olympics in 1936 or how the East Germans or the Soviets viewed Olympic Games.

When Jessie Owens ran his historical races in 1936, he did so as an athlete not a political message machine.

His personal heroism and victories were a statement to the leader of the “master race,” but largely because the leader of Germany wanted to make a political statement.

Jessie Owens did not.

I know because I talked with him when I met him in the presence of my father.

My father had run track at the University of Minnesota, and Jessie Owens for Ohio State.

By accident. they ran into each other and I was the happy listener to that meeting.

I did talk with Owens about his 1936 experience and he was very clear that he was proud to represent America but he was focused on winning his races, particularly “after they had staked the odds against me. I was angry.”

And I commented to him that “you certainly ran like you were pissed off.”

Remembering 9/11 and how we came together; seems a long way from where we are now.

But just going after the President and notably the way the “Progressives” are doing it, is hardly returning us to “all being in this together.”