While President Trump refused to be drawn into just another Punch and Judy show with North Korea and China, he also launched a process to awaken the famous American industrial sleeping giant.

“I fear all we have done is to awaken a sleeping giant and fill him with a terrible resolve.”

These are Japanese Naval Marshal General Isoroku Yamamoto’s prophetic words after the attack on Pearl Harbor.

President Trump just initiated Section 232 of the Trade Expansion Act of 1962 which might well play such a role as well.

Section 232 of the Trade Expansion Act of 1962 (19 U.S.C. §1862) authorizes the Secretary of Commerce to conduct comprehensive investigations to determine the effects of imports of any article on the national security of the United States.

The Secretary shall immediately provide notice to the Secretary of Defense of any investigation initiated under this section.

seek information and advice from, and consult with, appropriate officers of the United States, and

if it is appropriate and after reasonable notice, hold public hearings or otherwise afford interested parties an opportunity to present information and advice relevant to such investigation.

Upon the request of the Secretary, the Secretary of Defense shall provide the Secretary an assessment of the defense requirements of any article that is the subject of an investigation conducted under this section.

As expected, the leadership of the one party rule dictatorship that personifies today’s Peoples Republic of China, did not even attempt to stay on the civilized side of grand hypocrisy when the President made his announcement.

Beijing also weighed in, with a Ministry of Commerce spokesman statement: “China opposes the abusing of national security provisions, which would severely undermine the multilateral trading system, and disrupt the normal trade order.”

It is a profound American trait that along with our eternal optimism, we simple hate hypocrisy.

President Trump just threw the PRC’s “16 Character Policy” right back in their face.

This is because the driving principle of the “16 Character Policy is that everything the PRC does as a nation is to combine the military and civil into a seamless capability. 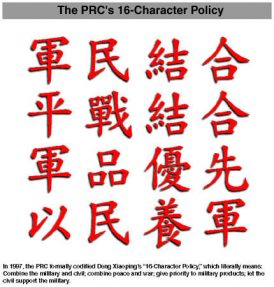 It is way past time that an American President stands up for our forgotten industrial workers ignored by both the Republican and Democrat Trade Spin Doctors.

Many in the self-identified “Blue Team,” have  been at all this for a long time as can be seen in a 2000 Washington Post article:

A decade later the respected magazine Wired asked a simple question about the American China relationship after our trade policies decimated American industry. In essence did the Blue Team fail?

A millennial focused magazine of note, Wired built out from the Washington Post article but was less sanguine in asking a profound question: Where have all the China hawks gone?

“It wasn’t long ago – the 1990s, in fact – that there was a broad political consensus on the perfidies of China. It held China in contempt, over everything from human rights and labor abuses to its presumed military ambitions. “The right and left were unified over China,” remembers Ed Timperlake, a former congressional and Pentagon staffer who co-wrote harsh anti-China books like Year of the Rat: How Bill Clinton Compromised U.S. Security for Chinese Cash.”

But the China hawks haven’t adapted. Timperlake rejects out of hand the idea that U.S. economic ties with China ought to temper a confrontational posture. “I don’t want to get in that argument, because if you do, they win,” he says. “If we lose sight of deterring China in combat, we lose. It’s not abstract.”

But today “The Blue Team” has just seen a US President and an Administration that really understands how to deal with the PRC, and as the Marines say “good on em.”