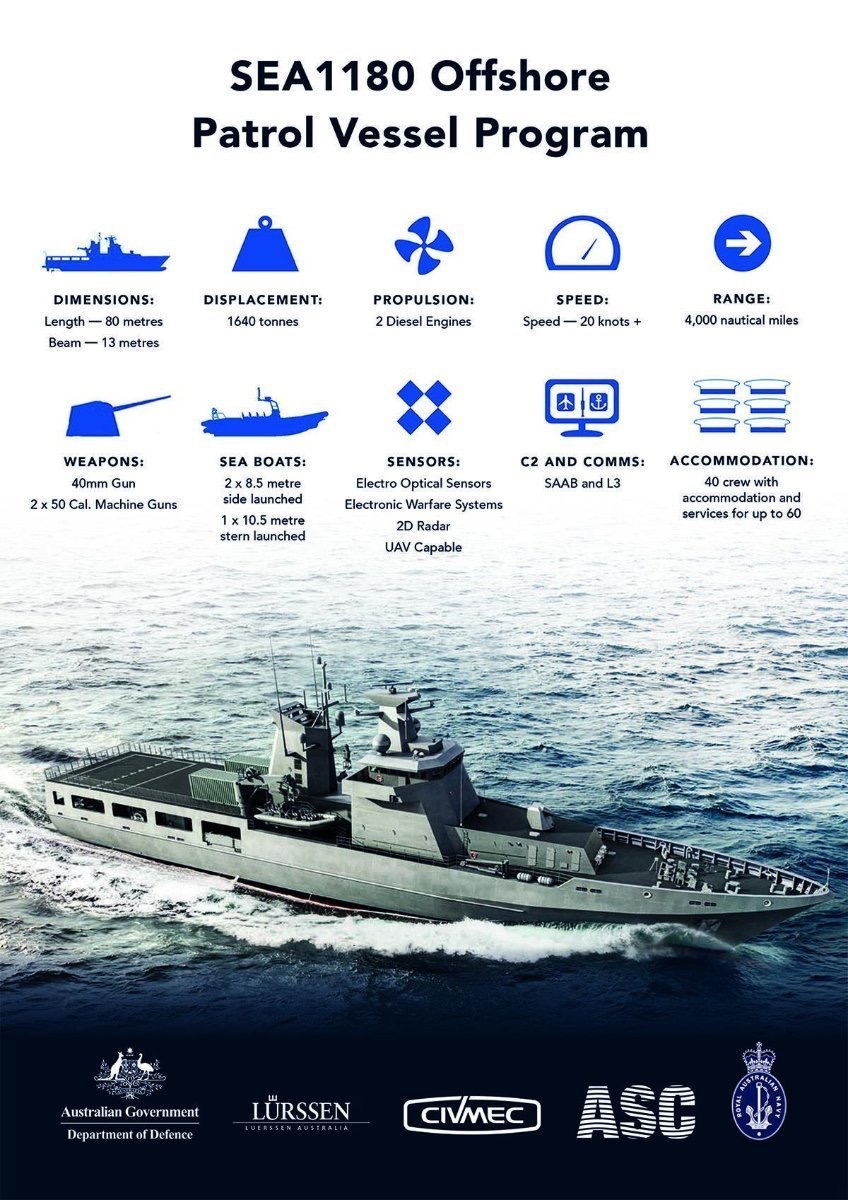 This post provides an overview of the new Australian Offshore Patrol Vessel project by the Australian Government’s Auditor General.

In the report, the challenge facing the builders revolving around the Australian workforce was highlighted. This is certainly why the build team was constructed the way it was with partnering between a ship builder and an Australian-based engineering company with significant experience throughout Australia on build projects.

This is how the report highlighted the challenge:

There is a chance that the Arafura Class OPV production will be affected by demands on the available workforce leading to an impact on quality and schedule. The cause of this risk is the limited resources shared across the Continuous Naval Shipbuilding program. It is also caused by competition with competing Industries. The Naval Shipbuilding College is identifying the increased demands and skillsets required.

The overview to the review is as follows:

The CEP consisted of an Analysis of Alternatives, a Risk Reduction Design Study (RRDS), a Request for Tender and an Offer Definition Improvement Activity. The Government also announced at First Pass that OPV designs from Damen (Netherlands), Fassmer (Germany) and Luerssen (Germany) had been shortlisted for the RRDS. Furthermore, the Government stated the first two OPVs would be built in Adelaide (Osborne Naval Shipyard) from 2018 and then transfer to Western Australia (Henderson Maritime Precinct in 2020.

The Request for Tender was released in November 2016. Upgrade of the Osborne Naval Shipyard was announced by the Government in December 2016. The CEP culminated with the Government announcing Luerssen as the preferred tenderer on 24 November 2017. The Government also announced that ASC Shipbuilding would be utilised for the first two OPVs and that the capabilities of Austal and Civmec would be used to build ten OPVs subject to the conclusion of commercial negotiations between Luerssen and Austal.

The contract for the construction of 12 OPVs was signed with Luerssen Australia on 31 January 2018. Luerssen nominated Civmec to construct the remaining ten OPVs and contracted Civmec initially to acquire and prepare the steel and pipe for all 12 OPVs from Australian sources (where available). Luerssen also established contracts with L3 Communications as a systems integrator and Saab Australia for a Situational Awareness System. The Commonwealth elected to purchase the RHIBs and RICs based on Luerssen’s OPV design directly from Boomeranger.

To reduce the risk associated with commencing construction, the OPV Platform System was divided into two platform design streams (Stream A and B) and design streams for major subsystems, the Situational Awareness System and the Communication and Navigation System. Stream A consisted of the six keel blocks of the ship’s hull which represented the high maturity of design enabling production to commence. Stream A was subject to a design and production readiness review process enabling construction to commence on schedule. Stream B are the remaining blocks which comprise the remainder of the OPV Platform. The internal components of these blocks were subject to some design change to accommodate those aspects of the OPV design that were modified to comply with Australian Government legislation or to meet Navy’s requirements for commonality or interoperability with other Australian Defence Force units.

The OPV Situational Awareness System includes a version of the Saab 9LV Combat System. The sensors and weapons to be integrated include a 2D radar, 40mm Gun, an Electro Optical Surveillance System, Electro Optical Device and Electronic Support Measures.

The OPV Communication and Navigation System (CNS) includes an integrated electronic navigation system, internal and external communications systems such as Satellite Communication (SATCOM), Maritime Tactical Wide Area Network (MTWAN) and High Data Rate Line of Sight (HDRLoS) capability. The ship will also have an Integrated Platform Monitoring System. The Support System is based on new analysis built from a combination of new and existing support data. For that reason, it lags the development of the Platform System. CCP 007 will adjust the Support System development and also introduce a Whole of Ship Design Review enabling completion of the design phase.

The construction of the first OPV commenced on schedule in November 2018 in South Australia at which time the ships were announced as the Arafura Class. The contracted keel laying milestone for OPV 1 was achieved in February 2019 and the ceremony for Nuship Arafura occurred on 10 May 2019. Production of the second OPV commenced in June 2019, two months ahead of schedule.

The project did not undergo a Smart Buyer Risk Assessment due to it already having had a similar risk review as part of an Independent Assurance Review.