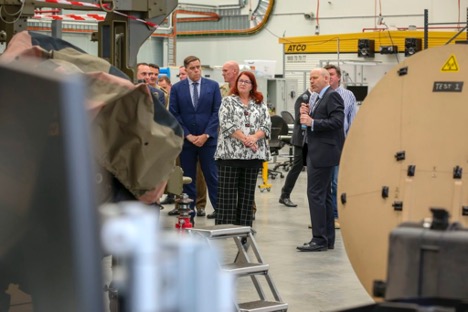 The Army’s new Project LAND 2072 Phase 2B Currawong Battlespace Communications System (BCS), a world-class wholly Australian-designed and produced capability, is looking increasingly attractive to the US and British Armies.

Both of these key allies are in the process of modernising their military communications systems, and Boeing Defence Australia is pitching Currawong or elements of the system to meet some or all of their particular requirements.

Others allies such as New Zealand could also be interested, but right now it is the US and UK which are live prospects.

Darcy Rawlinson, Boeing Defence Australia business development manager for deployed network communications systems, said Currawong met or exceeded many of the requirements of the UK Project Trinity which aims to develop a wide area network for their Army headquarters.

“What we will be offering is something based on the technology in Currawong,” he said. “We do have the ability to modify that there as the UK has slightly different requirements. The UK will go out and do a competitive tender and look for that over the next couple of years.”

Rawlinson said their experience with the ‘Headquarters on the Move’ development, a Currawong system in a Bushmaster armoured vehicle and the deployed data module in the back of a Hawkei protected mobility vehicle, were relevant to what the UK sought. “We are looking to work with the UK Ministry of Defence and do some concept demonstrations,” he said.

The US Army is also looking at upgrading its tactical network. Initially called the Warfighting Information Network – Tactical (WIN-T), the requirement has now been named the Integrated Tactical Network.

“Some of the senior leaders in the US Army have gone on the record saying it is not quite the network they need for the next war – it’s not quite ready to, as they say, fight tonight,” Rawlinson said. “So they are looking at a range of different technologies from a range of different vendors. There are certainly elements of Currawong they are interested in.

“We have spoken to them over the last year explaining our system for them to understand where it could fit into that broader integrated tactical network,” he added. “They are quite keen to take it to the next stage of doing some testing with it in their labs in the US so they can understand exactly how it performs.”

What the US has in mind is for Currawong to perform some of the heavy lifting in their network, the routing and network management system. Rawlinson said these were the elements that dealt with that really adverse environment in which military forces operated, one where there is never sufficient bandwidth, and a congested and contested spectrum.

“The network is highly dynamic, unlike in an enterprise environment where you wire up a building which stays there and will be there the next day,” Rawlinson said. “Here our headquarters are constantly moving. It is really important that the network is very agile and flexible to deal with all that, while reducing the amount of complexities that soldiers have to deal with.

“That’s where Currawong really comes into it – it does that,” he added. “We have managed to crack that nut for the Australian Army. The US sees that as something they think can really enhance their network as something well worth looking at.”

In Australian service, Currawong is replacing Parakeet, a communications network developed in the 1990s and which was then regarded as very advanced. Parakeet gave the Australian military encrypted satellite communications, though essentially from point-to-point rather than as an integrated network.

Currawong provides vastly more capability, versatility and redundancy. “Basically it gives you everything you normally get out of your mobile phone,” Currawong project director Ian Vett said.

“Of course there is no infrastructure in the deployed environment,” he added. “It does that through providing core network capability, a mission system manager that sits on top and manages…and then all the bearers.”

Currawong features multiple communications options for deployed forces. Mostly that would be by satellite, specifically the US military WGS constellation which provides fast, secure high bandwidth comms. However Australia only has proportional access to WGS on the basis of us funding one of the 10 WGS satellites, while two more are planned. The ADF can also use the Optus C1 satellite through a hosted defence payload.

Currawong features other communications options – microwave high capacity line-of-sight which is good out to around 80 kilometres, and troposcatter which provides high bandwidth reliable communications to around 200 kilometres. Should the circumstances permit, it’s entirely possible to connect Currawong nodes by fibre optic cable which is secure and delivers very high bandwidth.

Finally, Currawong can use existing infrastructure – the internet – through a new capability for secure communications called External Network Access Point (ENAP). The troposcatter and ENAP capabilities, along with the new medium satellite terminal, will be delivered soon through Currawong Release 2.

Vett said people might think all this wasn’t so hard as their own office network worked perfectly well. “Obviously we don’t have mobile phone towers and things like that when these guys are fighting the fight, so we have to bring in all that. That’s what Currawong is and that’s why it’s so expensive.

“The thing is this is a deployed battlefield communications system. You are only as good as the bearer you’ve got,” Vett said. “The trick here is not how much bandwidth you get. The trick is with limited bandwidth, what can you do with it?

“We get voice over very bad lines that have a lot of delay,” he added. “With a 32 kilobit line you can still get video. You also have to move quickly. You have to be able to pick it up, dump it around and immediately get it working again.”

The $950 million project – taking in support and acquisition contracts it’s actually a bit over $1 billion – dates back to the early 2000s and has followed a tortuous course, with projects merged, terminated and resurrected.

Boeing was awarded the contract for what is now LAND 2072 Phase 2B in September 2015, although the company had been working on it since 2011. Boeing’s Release 1 technology was delivered just 27 months after contract signature, a notable achievement considering the extensive software and hardware development required. Release 2 is under way and Release 3 is planned for late next year.

Significantly, because Currawong was developed in Australia, it comes without ITAR-added complications and restrictions of US technology.

For the Currawong project, Boeing decided to develop its own $7.5 million test and assembly centre in the Brisbane suburb of Wacol, officially opened by Defence Industry Minister Melissa Price at the end of October.

The minister said this was a further demonstration that major companies were seeing the opportunities and making significant investments in Australia’s defence industry.

New Boeing Defence Australia Managing Director Scott Carpendale said that, before the Wacol facility was opened, Boeing had to send equipment interstate and overseas for testing to ensure it would work wherever it was needed, be that in snow or desert conditions.

“Now we can do it right here, quickly and to the most rigorous standards,” he said. “This enables us to be more agile with our development, to identify and address issues earlier and to deliver capability to the Australian Defence Force faster.”

This article appeared in the Nov-Dec 2019 issue of ADBR