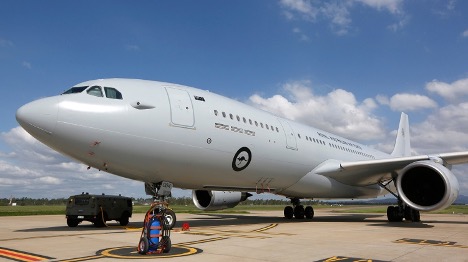 The RAAF’s initial five KC-30s were new-build aircraft delivered in 2011 and 2012, and these have since been joined in service by two more aircraft – both of which are former Qantas and Jetstar airliners – with these aircraft being converted and delivered to the RAAF in 2018 and 2019.

While no actual airframes of interest have been identified, they are believed to be Qantas A330-203 airliners. Most of these aircraft are currently stored and have become redundant to requirements in recent months due to a drastic reduction in international and domestic travel brought about by the COVID-19 pandemic.

Virgin Australia is also reportedly looking to offload some or all of its A330-200s as that business is restructured, although these are older airframes that use Rolls-Royce engines, whereas the Qantas and RAAF’s aircraft are powered by GE engines.

While most of Qantas’s A330-200s are of a similar age and block build to the RAAF’s seven current KC-30As, there are still some configuration differences to those airframes that were built from new as MRTTs. The initial new-build airframe commonality with Qantas’s airliners was intentional as, at the start of the Project AIR 5402 program which resulted in the MRTT, it was envisaged that the then Qantas Defence Services – now part of Northrop Grumman Australia – would not only perform the conversion work on all but one of the MRTTs, but would also support and sustain the aircraft in service.

Due to their age, configuration differences, and some of the more invasive MRTT modifications required, the conversion work on the initial two former airliners was not without its complications. And as the QDS/Northrop Grumman workforce that did the conversions of the four original new-build aircraft had long-been dispersed, the conversions of these extra two jets was undertaken by Airbus in Spain and Germany.

ADBR understands there are varying levels of enthusiasm for the latest proposal. Qantas would obviously be keen to offload the excess capacity and to possibly engage some of its skilled Brisbane-based heavy maintenance workforce in a local conversion program.

Airbus as OEM and Northrop Grumman as the RAAF’s platform steward are reportedly willing to study the proposal further, and to see if the conversion work could be performed at Northrop Grumman’s Brisbane Airport facility by a joint industry/airline workforce.

But while the RAAF would obviously be eager to add to its tanker transport force and could absorb extra aircraft into its mature operating force, it reportedly has reservations due to the age of the airliners – the youngest of which is about 12 years – and the cost of conversion in what will likely be a tightening fiscal environment.