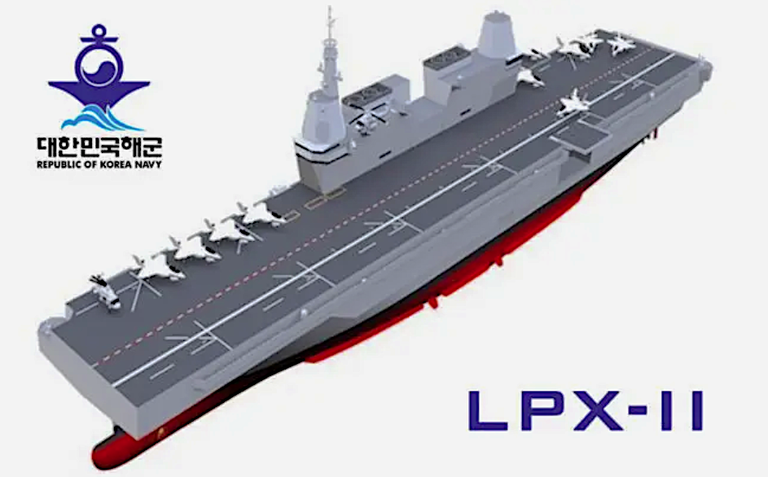 The South Korean Air Force has added F-35As to their combat force. They are now on track to add F-35Bs to a sea base.

An aspect of F-35s which is critical to understand is how they communicate and how they hunt as a pack.

With the South Korean wolfpack of F-35s, 8 ship formations (with Block IV software) can hunt as a pack.

This gives the South Korans the capability to use F-35s from the sea as a separate strike force are operate as part of a land-based strike force.

What it does give is a much wider range of launch points against an adversary.

And with the core allies of South Korea adding significant numbers of F-35s to Pacific operations, the South Koreans can leverage an extensive web of F-35s working as a C2/ISR kill web.

There are security limitations, but with the way security is handled inside the aircraft, it is possible to alter which data is shareable dependent upon policy decisions.

But the core point is that the F-35 has significant reach into a 21st century “big blue blanket.”

As the CO of MAWTS-1, Col. Gillette described it:

“The development is a significant one. It is not only a question of interoperability among the F-35 fleet, it is the ability to have common logistical and support in the region with your allies, flying the same aircraft with the same parts.

“And the big opportunity comes with regard to the information point I made earlier. We are in the early stages of exploiting what the F-35 force can provide in terms of information dominance in the Pacific, but the foundation has been laid.

“ hen we highlight the F-35 as the 21st century version of what the World War II Navy called the big blue blanket with the redundancy and the amount of information that could be utilized, it’s pretty astonishing if you think about it.

“The challenge is to work the best ways to sort through the information resident in the F-35 force and then how do you utilize it in an effective and efficient way for the joint force. But the foundation is clearly there.”

Given that a major trajectory of change in the Pacific is the USMC and the US Navy working on enhanced integratability, and given the central role F-35 is and will play in that process, South Korea is joining  a dynamic process of change with regard to the evolution of interconnected sea bases.

This means as well that the South Korean sea base can be used either to support operations against North Korea, by providing alternative vectors of operations, or in terms of reaching out into the region to protect their interests and to work with allies in the region.

Clearly, China has and will extend their reach in the region and will do so in part by their maritime power. South Korea has maritime capabilities for sure, but not well tied to regional power presence.

But building out such capabilities with an F-35 enabled sea base is a very effective way to do so.

With the USMC and the United Kingdom following similar trajectories with regard to how to operate F-35B enabled sea bases, there are allies whom the South Korans could work with directly in shaping their con-ops as well.

Despite historic rivalries and challenges with Japan and Singapore operating F-35Bs, it can expected that cross learning and cross operations are on the table.

That then raises the question of the task force in which the F-35B enabled sea base would operate.

What organic capabilities do the South Koreans need to consider onboard to operate most effectively and to be effective building blocks for either the national or allied deterrent structures?

I will address that question in the next article in the series.

The graphic is from the South Korean Ministry of Defence.