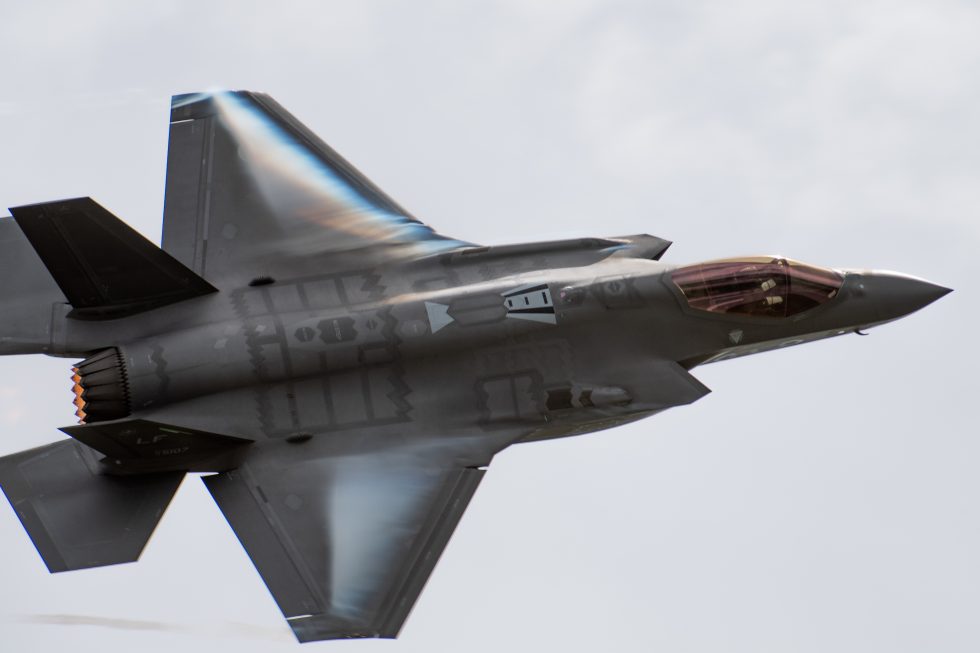 Canada’s CF-18s are 40 years old, no longer tactically relevant, and not survivable in a modern day, high threat combat environment.

Replacing these 4th Generation fighters will be 88 newer airplanes that are meant to last for the next 40 years, patrolling the arctic and Canada’s coastlines, contributing to NORAD as well as the NATO alliance.  The competition scoring is purportedly heavily weighted 60% on capability, with additional scoring of 20% on cost and 20% on economic benefits to Canada.

However, Canadian military procurement has never been about capability of the hardware for a peace-loving nation.  Instead, politics, geographical considerations and economics have always been the key drivers.  As much as I personally want the advancement of 5th Gen technologies to be a part of the new Canadian fighter choice, the reality is that the decision will come down to employment and the economic benefits.

In 1992, one of Bill Clinton’s presidential campaign slogans running against incumbent George H.W. Bush was “It’s the Economy, Stupid”.  For Canada’s new fighter, that rings so true.

Let’s get past the argument that we hear far too often that Canada does not need a military except to help in humanitarian aid, support disaster relief and conduct peacekeeping.  The reality is that Canada has the world’s second largest land mass, Canadian arctic territory is vast on a scale that few can grasp and believing that national sovereignty should be passed on to the US is absurd.  With climate change and the arctic melting, access to Canada’s natural resources in the far north will have to be monitored by Canadians.

And finally, for all North America, the path of least resistance for Russia to attack the infrastructure of the US and Canada is over the polar icecap and into Canada’s potentially unprotected backyard.  If you put a fence around your property at your home to protect your kid’s toys and your belongings, why wouldn’t Canada protect the vast richness that makes Canadians so proud….so squash the argument that Americans will protect Canada for us.  It’s our job to take care of our country.

Richard Shimooka contributed to an opinion piece recently that addresses this issue.

Does Capability Matter? …” Good Enough Is”

What is the difference between a brand-new Boeing Super Hornet or a Swedish Gripen or a Lockheed Martin F-35?  I will continue to write often trying to explain the difference between a fighter plane that first flew in 1976 (F/A-18), been upgraded and enhanced over the last 4 decades and a new generation F-35 is just starting its life and that will be upgraded and enhanced over the next 40 years of life.  Ignore my comparison of buying a new iPhone vs the best, old Nokia Flip phone.  I love to talk about capability and to explain the differences revolutionary 5th Gen technologies and the older 4th Gen aircraft.

All of this will be lost in the Canadian context because without a compelling employment / economic story, technology and capability won’t be a deciding factor.

Recall that in Canada….” Good Enough Is” …and for many Canadians, picking any of these 3 fighters is good enough.

Canada has invested over $600 Million into the F-35 program as a partner from the outset.  Canadian companies have secured over $2 Billion in production and maintenance contracts related to the 5th Gen fighter.  With a projected production into the 2040’s, Canadian companies stand to contribute to building upwards of 3000 fighters and supporting the sustainment of a franchise fleet of F-35s worldwide into the 2070’s.  OMX published projections of 150,000 jobs linked to F-35 and $17 Billion dollars of benefit over the life of the program.

Canadian companies must compete for best value in the F-35 program which means no handouts BUT does reward those companies with the potential to build high tech components for a franchise aircraft program that will last more than 50 years.  That means building parts for 3000 F-35s not just 88 jets as in the case with the other competitors.  Lockheed Martin has a great cross-Canada economic story to tell, (see video below) but has never managed to get their message to penetrate and stick with as many as they hoped.  The story of the many F-35 highly skilled jobs that remained in place through the Pandemic and will continue in the future was never told.

Finally, if Canada decides to buy a different fighter than F-35, all these contracts will end quickly, the work will go elsewhere and the technology advancements for the Canadian workforce will atrophy.  The F-35 economic story is about job, jobs, jobs but no matter how professional their videos are, the messages haven’t stuck.

Boeing is pushing the latest and last upgrade to the Super Hornet which first flew in 1995 (27 years ago based on the F/A-18A which originally flew in 1976).  The Boeing economic story is $61 Billion and 248,000 jobs linked to the future fighter.  This is an incredible offer considering the procurement contract is capped at $19 Billion.

How does a company make a promise this compelling when they are hemorrhaging $$$ Billions after the two Boeing 737 Max airliner crashes, the collapse of the airline purchasing agreements when Covid-19 hit, the much-delayed KC-46 refueling tanker problems, a one-year delay in the franchise development of the new US T-7 training jet, and more?

How does Boeing with recognized financial woes guarantee a payoff of more than 3 times the original contract ($61B for a contract of $19B)?

My father taught me….”If it sounds too good to be true, it probably is”.

Those numbers seem so wildly great that I suspect that most of those projections are linked to Boeing commercial work that is being done and planned to be contracted in Canada.  Boeing airliner work will likely happen in Canada regardless.  Purchasing 88 Super Hornets built in St Louis, Missouri and not in Canada does not drive support for 248,000 workers or payoff $61 Billion in manufacturing and sustainment of such a small fleet of jets.  Canadians and the media don’t look hard into military procurement; the topic is just not important enough now post-Covid, Delta variant spreading, economy returning but Canada facing a massive debt that could last a generation.  If Boeing promises 3 times the payoff, wouldn’t everyone jump at that.

During the 2000 US Presidential debates, George Bush called Al Gore’s proposals ‘Fuzzy Math’. I am an engineer and a math guy, and to me, $61 Billion for a $19 Billion contract looks very much like ‘Fuzzy Math’.

Saab – This is not Lego

Saab has offered to assemble the Gripen fighters in Nova Scotia if their fighter is selected.  Good high-tech jobs in the Maritimes would be a huge coup for the east coast workforce.  Except…building a new fighter that is sophisticated enough to survive in the modern battlespace and into the next 40 years, is not something you assemble like Lego blocks.  The precision to build a flawless, next generation fighter happens at the hands of the most advanced aerospace work force in history and the most secret technologies for manufacturing and assembly ever.

It is great marketing to promise to build 88 jets in a foreign land (Canada) from where the jets are manufactured (Sweden).  How does that happen with a work force in the Maritimes that has never produced a new plane let alone a next generation fighter plane?  Based on my 40 years of watching airplanes being built from scratch, it certainly isn’t just assembling a Lego kit.

We are talking about the economic considerations of the fighter competition but there is a cost variable introduced recently.  In late June, Switzerland announced the selection of the F-35 as their next fighter after a very long competitive process.  What was stunning in the debriefing by the Swiss Federal Council was that purchasing and operating 36 F-35s was assessed as costing $2.16 billion US (that’s nearly $3 Billion Cdn) less over a 30-year forecast period than the other 4th Gen competitors.

How does the 5th Gen fighter cost less to purchase and operate by such an immense margin than fighters like the Super Hornet, Eurofighter and French Rafale?  If anything, these older fighters should be cheaper and less costly to maintain than the newer generation F-35.

This Swiss selection of F-35 will be impossible to ignore in Canada.

The Story to be Told

The election will likely give the Liberal government time to ponder spending $$$ Billions on new fighters when there are real crises to manage, like reopening schools, returning to a functioning economy, the collapse of Afghanistan after so much blood was shed there and much more.  The topic of new fighters will not go away anytime soon and the debacle that has been the F-35 campaign in Canada over the past 10+ years looms over its chances of winning.

Whatever the recommendation from the official procurement process, the final decision will come from behind closed doors and will have to be told in a compelling way to show Canadians how they will benefit most from the jobs and funds that will be invested in Canada.