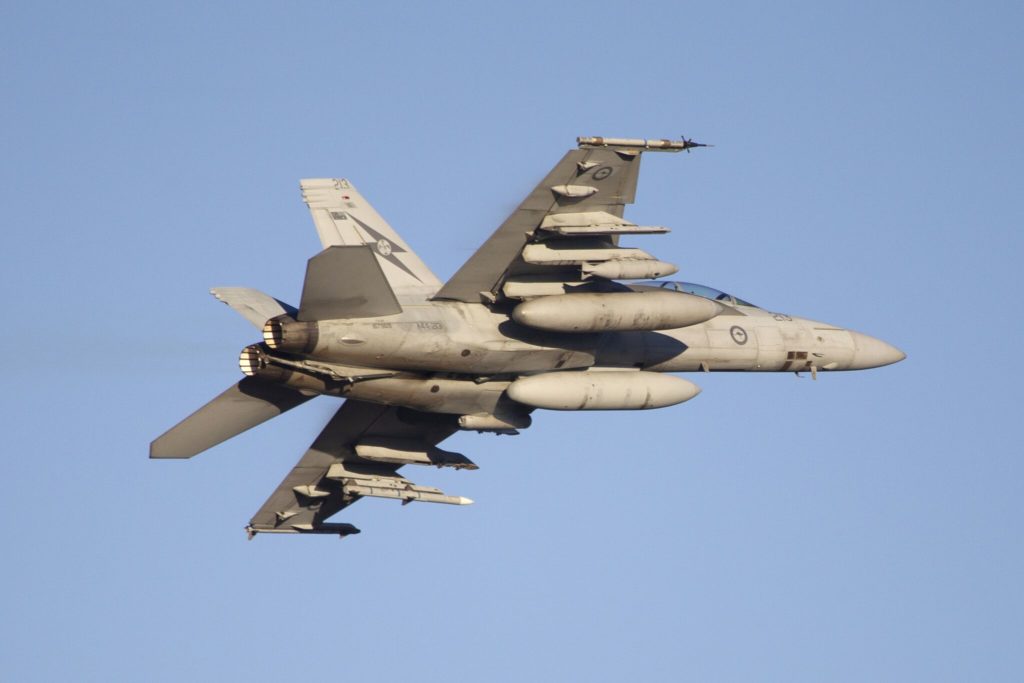 The FCI course was founded in 1954 by WGCDR Dick Creswell to develop specialist Fighter Combat Instructors from air combat lessons he had learned as Commanding Officer of 77SQN in the Korean War, and his previous air combat experience in WWII. In 1954 the RAAF was flying Gloster Meteor fighters, and through the following four decades course candidates operated the CA-27 Sabre, Dassault Mirage IIIO, and the classic Hornet.

In 1992 the FCI course was expanded for the first time to include ground-based Fighter Intelligence Instructors (FII) and Fighter Combat Controllers (FCC), while later that decade the first F-111C strike crews were also invited to undertake the course and graduate as FCI ‘patch-wearers’.

FCIs are considered subject matter experts in the fields of air combat, strike, RAAF weapons systems, and adversary capabilities and tactics. But to be considered to participate in the course, candidates must have completed a number of professional milestones.

Following operational conversion (OPCON) to their aircraft type, candidate pilots and air combat officers (ACO) will have completed at least one three-year squadron tour and a large force employment exercise such as Red Flag, Cope North or Pitch Black. These major exercises are often where pilots are upgraded to a B Category (B-Cat) rating which qualifies them to lead four-ship formations in combat. Course candidates are also invited to participate based on their above-average competency and leadership qualities.

Up until 2017, the FCI Course was conducted wholly within Air Combat Group (ACG) and using ACG resources. Due to the limited resources of the operationally-focused force element group (FEG) – and despite the high-quality output of the course – the course’s scope was understandably limited.

“It was still a very fighter-centric course,” Air Warfare Centre Commander, AIRCDRE Phil Gordon told ADBR. “But with the advent of Plan Jericho and the Air Warfare Centre in 2016, the die was cast to fundamentally re-think how we execute that advanced integrated training, and we leant very heavily on the US Fighter Weapons School model when it broadened its scope to become the USAF Weapons School.

“The first AWIC we ran was in 2017, and that was the first one that was not entirely based around fighters with other supporting capabilities, but became a whole-of-community integrated effort,” he added.

With its own dedicated budget and instructional resources to draw upon, the AWIC was brought under the Tactics and Training Directorate (TTD), an element of the Air Warfare Centre.

“The Air Warfare Centre I would say was born of Plan Jericho and the need to drive the Air Force to make the most of all the new capabilities that are being introduced,” AIRCDRE Gordon said. “When it was formed in January 2016 with the motto to ‘Ready the Warfighter’, it really was focused on driving innovation and integration across all of air force to get us to that 5th generation future.

“One of the newly created directorates within the AWC at that time was the TTD which has 88 Squadron within it,” he added. “I think the TTD is one of the real crown jewels in our drive for high-end integration. It has some really high-calibre subject matter experts from each of the platforms and systems that we use operationally, and we put them all together and make them work out how to get all the systems to work together and how to fight as a system-of-systems, not as a series of individual platforms.

“Having developed these tactics, 88SQN really shapes the training and the tactics and the development of the rest of Air Command, so that everyone is heading in the right direction to deliver on that integrated future.”

While the AWC is headquartered at RAAF Edinburgh near Adelaide, the “critical mass” of TTD and 88SQN is based at RAAF Williamtown in order to be co-located with key RAAF elements such as ACG, 81WG, Headquarters Surveillance & Response Group (HQSRG), 41WG, 42WG, the E-7As Wedgetails of 2SQN, and most of the fighter squadrons’ headquarters.

The TTD is currently headed by GPCAPT Matt McCormack and 88SQN is commanded by WGCDR Tim Main. GPCAPT McCormack is a classic Hornet pilot and a former CO of 2OCU, while WGCDR Main is an air combat officer and a qualified Fighter Combat Controller (FCC).

“So we broadened the community away from just fighters to include Wedgetail and C-130s,” AIRCDRE Gordon said. “Then in 2019 we created a Growler Tactics Instructor (GTI).”

For the complete article which highlights the transition to integrated training, see the following: