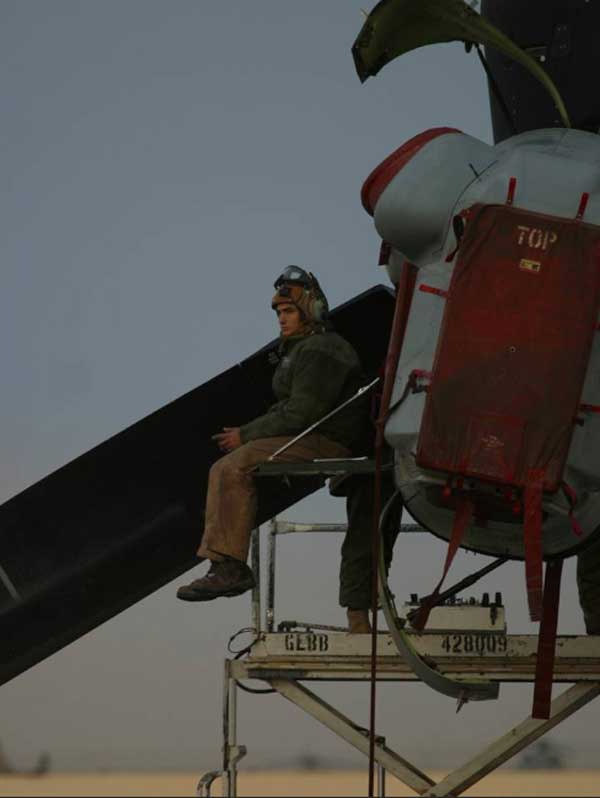 When we visited New River to talk with members of the Logs Demo team standing up the Osprey at New River, we were reminded of the last major new vertical lift asset to go through New River.

This is the third  in this series of insights into the brith of the Osprey Nation.

From Supply Of Parts To Battle Damage Repair: The Challenge Of Components’ Reliability

This is the second part of the interview with Lieutenant Colonel Garcia with both Iraq and Afghan experience.

In the first part of the interview, Garcia laid out some findings from his operational experience, and ways to look at the Osprey from combat deployments.

Here Lieutenant Colonel Garcia deals with the challenge of maintaining the aircraft in Afghanistan.

He highlights that the maintenance approach is a work in progress.

It takes time to get it right, but notably the maintenance regime and supply chain is being reworked to reflect actual operational and combat experience.

This is normal in the deployment of new systems.

But ensuring that the deployed warfighter has the right parts at the right time is the challenge facing the supply system, and this system is clearly a work in progress. SLD: How many aircraft did you have in operation?

Lieutenant Colonel Garcia: We generally operated about 10 of those aircraft on a regular basis.

Usually, one of them was in phase maintenance, scheduled maintenance at 210 hours of flight hours.

The other aircraft is generally in the down status for extended period of time due to cannibalization, because of some issues with the supply system.

SLD: Could you identify some of those issues?

Lieutenant Colonel Garcia: Let me be clear: it’s not the aircraft itself, which poses the challenge.

Aircraft does what it’s been designed to do.

As I mentioned, we had a lot of converts, a lot of fans of it.

SLD: What then in your view is the challenge, which needs to be met to get to the next phase of reliability with the aircraft?

Lieutenant Colonel Garcia: Improving the performance of the components is central.

We have components that are supposed to last in excess of 5,000 hours, which we’re routinely replacing less than a thousand hours and it’s not just the fact that we have to pull something off and replace it with something else.

It’s all the other things that you have to pull off to do that, all the maintenance — it added maintenance on top of that.

SLD: The challenge is enhanced by the need to access the parts to be replaced?

Lieutenant Colonel Garcia: For example, with repair to the gearbox, you have to remove almost everything out of the nacelle.

To get at the gearbox, the blades have to come off the hubs.

The engine has to come out; a lot of accessories have to come out of that. And you have inherent low risk once everything gets put back together to make sure it works properly.

SLD: And you are doing this in difficult conditions in Afghanistan?

SLD: Do you think there’s any way that they can redesign some of the access panels in the aircraft to be more effective?

Lieutenant Colonel Garcia: That is happening.

The block A to the block B is night and day as far as some of the access panels and some of the rewiring.

Changes have been funded to rework some of these issues.

Among some of the issues we missed out back in 2000, a lot of these were fixed.

We are working more effective approaches to integration.

SLD: From your point of view, you look at the system overall.

You don’t really care about the subsystem replacement.

You want to see the system and your ability to get the aircraft operational as rapidly, as safe as possible.

Once again, the design inside has gotten better.

So it’s a little easier, it’s not as cluttered.

The panels have gotten bigger, a lot better.

SLD: What is the impact of the digital maintenance systems on the aircraft?

Lieutenant Colonel Garcia: The aircraft was designed before you went flying in a regular basis, you weren’t supposed to go and open these panels unless you had to work on it.

The aircraft is instrumented that it tells on itself.

If there’s an issue, it’ll tell you based on vibrations, based on electrical components not working properly, not sending back the appropriate signal to tell you that everything is okay.

So the panels weren’t supposed to be used as often.

So with that mindset, the panels that they had on there probably made sense, that’s no longer the case.

We are changing the panels to reflect actual operational experience.

The aircraft always tells on itself entirely.

Although it identifies an issue, you don’t know completely what it is from the digital indicators, especially when we talk about wiring.

SLD: So you need to visually look?

We also need to do periodic checks just to make sure that there’s no undue wear.

A lot of things that we have to do now—a lot of the checks that we do on a daily and turnaround inspection that the crew chiefs go out and do, that the mechanics go out and do—is to look for undue wear, parts that came loose, wiring that is broken.

This reflects our learning process over the past five or six years.

SLD: So you have worked a learning curve to shape the next phase of reliability enhancements in effect, based on operational experiences?

Lieutenant Colonel Garcia: Our maintainers have learned a lot and their knowledge has grown by leaps and bounds.

Battle damage repair was one of the things and when we went out with the VMM-263 in Iraq, there were no publications that said this is how you fix it. This is what’s going to happen.

Because nobody knew, we hadn’t faced that before.

In fact right now, it’s still in its infancy.

So we went out there, that was one of the unknowns.

We weren’t sure what to expect.

We had the misfortune of receiving some damage.

However, we quickly found out the aircraft is very survivable.

We weren’t hit with anything very large, mostly small arms, and from RPGs, stuff like that but the holes that actually left were very small.

So we were able to fix those things.

The maintainers have learned a lot and they get very good at fixing composites, some of the repairs, you cannot tell that anything had happened.

SLD: One of the things you were monitoring was the real state of the performance of the parts and essentially either the parts have to be modified to give you the actual performance hours or one must have more realistic performance parameters?

Lieutenant Colonel Garcia: We always poke supply, hey, you guys are getting the supplies that we need, the parts that we need.

You know, if you have all the parts, if you have an endless supply of parts right there handy, we can keep this aircraft flying constantly.

The maintainers will bend over backwards to make sure it happens.

But the reason the supply is not working optimally is once again a 5800 to 5900 hour component is lasting less than the stated norm.

Some of them are on 75 to 80 percent of the projected lifetime.

Some are 40 percent or less.

Those that are 40 percent or less or something at some point, if you just re-normalize what that lifetime component is, it’s not really 268 hours, it’s 130 hours.

So we can then buy twice as many parts to ensure continuity of operation.