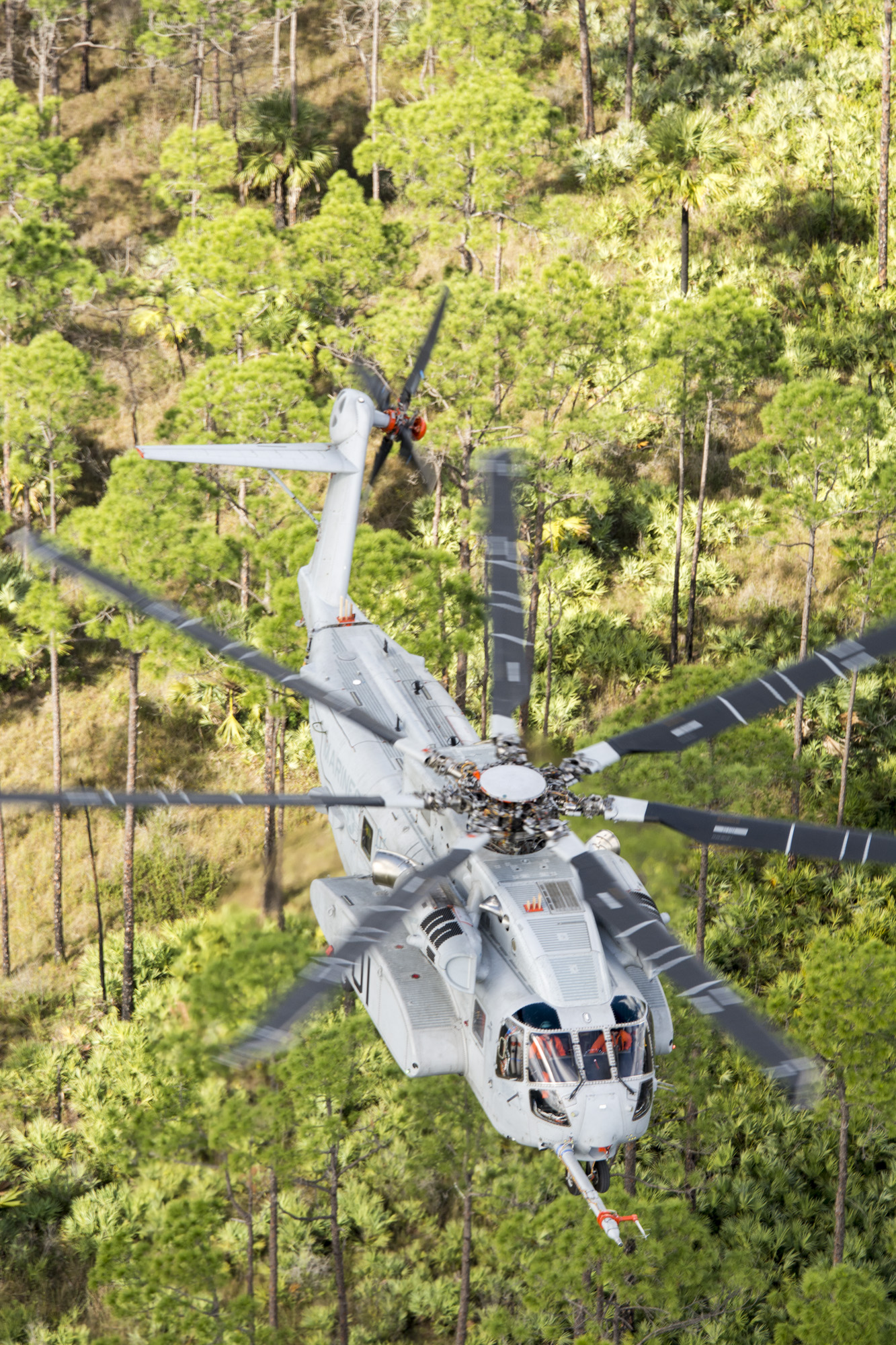 The transformation of Marine Corps aviation and with innovations in terms of the ability of the Marines to operate at greater distance, speed and more effectively in distributed operations began with the Osprey.

The F-35B is now being added to the force and it provides, sensing, C2 and strike capability for a distributed force.

Coming next is the CH-53K, which is no more of a replacement for the CH-53E than the Osprey replaced the CH-46 or the F-35B is replacing Harriers and Hornets.

And next up will be a new vertical life class four UAV, which will further enhance the ability to support the Marines at sea and at shore in the distributed battlespace.

And the K is arriving as the Marines are transitioning the MAGTF with a wide-ranging emphasis on digital interoperability.

The most recent Weapons Training and Tactics course at the Marine’s cutting edge Marine Aviation Weapons and Tactics Squadron One was the first WTI where digital interoperability was tested in every aspect of the training.

The K unlike the E is a digital aircraft.

It is coming as the software upgradeable F-35B is shaping a rethinking process about what digital capabilities built into a modernization process might mean for the evolution of the force as well.

Recently, I visited the Sikorsky West Palm Beach facility to get an overview on the K as it moves on to its next and final phase before entering the combat force.

In later pieces, I will focus on the various aspects of change, which the aircraft embodies and discuss ways in which the aircraft both draws upon the digital transformation of the MAGTF as well as enables its further evolution as well.

I discussed the K and its operational performance with two senior test pilots, each of whom emphasized complimentary but different aspects of what the K brought to the fight.

My first pilot interview was with Chief Experimental Test Pilot Stephen McCulley who now works for Sikorsky but is a former Marine with extensive CH-53E experience.

In our discussion, he highlighted the significance of the shift to a digital aircraft in terms of safety, reliability and performance in the hands of the crew.

The significant changes in how it performs versus the mechanical CH-53E underscores that the shift in aircraft is generational and not simply a final letter change.

During various visits to F-35 bases, the P-8 and Triton base at Jax Navy, and most recently to the Cyclone base in Nova Scotia, the new digital systems which characterize the brains of the new aircraft yield a major change in the workflow onboard the aircraft as well as provide foundations for significant advancements in how systems can work more effectively with one another as the force evolves and gains combat experience.

We are talking about an across the board generational shift which is central to ensuring that U.S. forces can fight and prevail in the distributed battlespace which the U.S. military is transitioning to for the high intensity fight associated with anti-access and area denial environments.

It is clear that the CH-53K is a key part of the generational shift.

We started by discussing the cockpit and the fly-by-wire system, which provides the computational brains for the K.

“We built the CH-53K with a focus on reducing pilot workload. By making the helicopter easier to fly we allow the crew to focus on executing the mission.

“The cockpit has five displays all of which can be used to display flight and mission data.

“This provides both redundancy and flexibility in executing missions and drives the crew’s situational awareness up.

“Missions can be planned at a ground based planning station and uploaded to the helicopter at the start of the mission.

“Routes, communication plans, troop and cargo weights can all be loaded through a data card – we used to have to type all of this into the aircraft manually.

“The aircraft can use this data to calculate my power requirements throughout the mission.”

Obviously, this provides for a much safer situation for the crew and the ground landing handlers as accuracy and time to offload is reduced.

This enhances as well the critical time factor in delivering to mission which is so central as the US military shifts from slo-mo to higher intensity and higher tempo operations.

McCulley contrasted his experience in the E with what he is seeing with regard to the K.

“In the E, the pilot and co-pilot are focused on flying the aircraft, doing fuel calculations (using a calculator) and landing in areas where I actually can not see the ground. Navigation used to be the hardest thing we had to do next to dusty landings.

“In the K, the automated systems take care of much of this.

“The helicopter can couple to the flight plan allowing it to essentially fly itself to the destination and once we arrive, it can fly the approach down to a hover at a point I specified during planning. ”

“The 53K provides a position hold capability that allows us to hover in DVE (degraded visual environments) – a significant improvement from the CH-53E which relied on the pilot to hold position based on visual reference with the ground.

“This capability will greatly improve safety when operating in dust or snow and at night.”

We then turned to a discussion of how the K might then fit into the digital interoperability transformation of the Marines.

He emphasized that because the K is built on a digital bus and is software upgradeable the systems onboard can migrate through a built in modernization process, so to speak and provides a foundation for working the digital networking which the other new systems were enabling as well.

“The mission of the 53K is to provide heavy lift in the battlespace.

“To that end we have focused on increasing the aircraft’s lifting capacity as well as improving the external load system.

“We now have a triple-hook system that allows us to support multiple sites, which will allow us to better support troops on the ground.

“And it’s real-time, and improves the crew safety because I have a center-of-gravity real-time cargo-load calculating system.”

To repeat: the shift from the E to the K is not simply a shift in the last letter; it is a shift in generations and not just for the aircraft but for the combat force.

This article was first published on November 13, 2017.