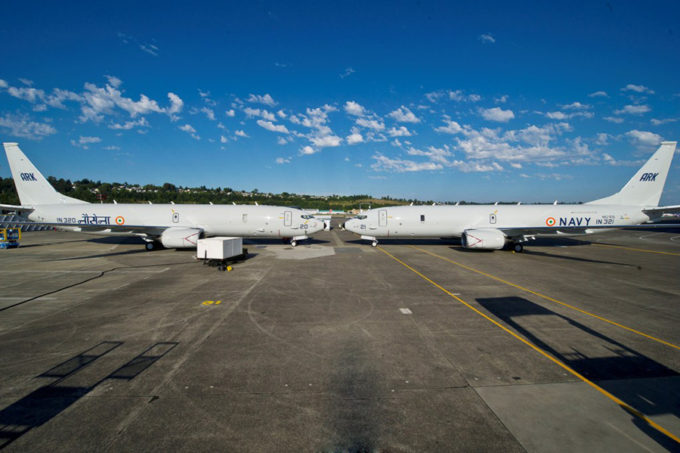 NEW DELHI. Boeing is continuing to expand the Indian Navy’s long-range maritime reconnaissance anti-submarine warfare capabilities with delivery of the country’s ninth P-8I on November 18. The patrol aircraft is an integral part of the Indian Navy’s fleet and has surpassed 25,000 flight hours since it was inducted in 2013.

The ninth P-8I is the first aircraft to be delivered under an option contract for four additional aircraft that the Indian Ministry of Defence placed in 2016. The Indian Navy was the first and is the largest international customer for the P-8 and recently completed seven years of operating the fleet. In addition to maritime reconnaissance and anti-submarine warfare capabilities, P-8I have been deployed to assist during disaster relief and humanitarian missions.

“Our focus has been, and will be, on delivering the world’s best maritime patrol aircraft to the Indian Navy,” said Surendra Ahuja, Managing Director of Boeing Defence India. “The P-8I, with its exceptional maritime surveillance and reconnaissance capabilities, versatility and operational readiness, has proven to be an important asset to the Indian Navy. We remain committed to supporting the modernization and mission readiness of India’s defence forces.”

Boeing is currently completing construction of the Training Support & Data Handling Centre at INS Rajali, Arakkonam, Tamil Nadu, and a secondary center at the Naval Institute of Aeronautical Technology, Kochi, as part of a training and support package contract signed in 2019. The indigenous, ground-based training will allow the Indian Navy crew to increase mission proficiency in a shorter time while reducing the on-aircraft training time resulting in increased aircraft availability for mission tasking.

Boeing is the world’s largest aerospace company and leading provider of commercial airplanes, defense, space and security systems, and global services. As a top U.S. exporter, the company supports commercial and government customers in more than 150 countries and leverages the talents of a global supplier base. Building on a legacy of aerospace leadership, Boeing continues to lead in technology and innovation, deliver for its customers and invest in its people and future growth.

Boeing’s advanced aircraft and services focus play an important role in mission-readiness for the Indian Air Force and Indian Navy. Boeing is focused on delivering value to Indian customers with advanced technologies and is committed to creating sustainable value in the Indian aerospace sector – developing local suppliers, and shaping academic and research collaborations with Indian institutions.

This article was published by India Strategic on November 18, 2020.