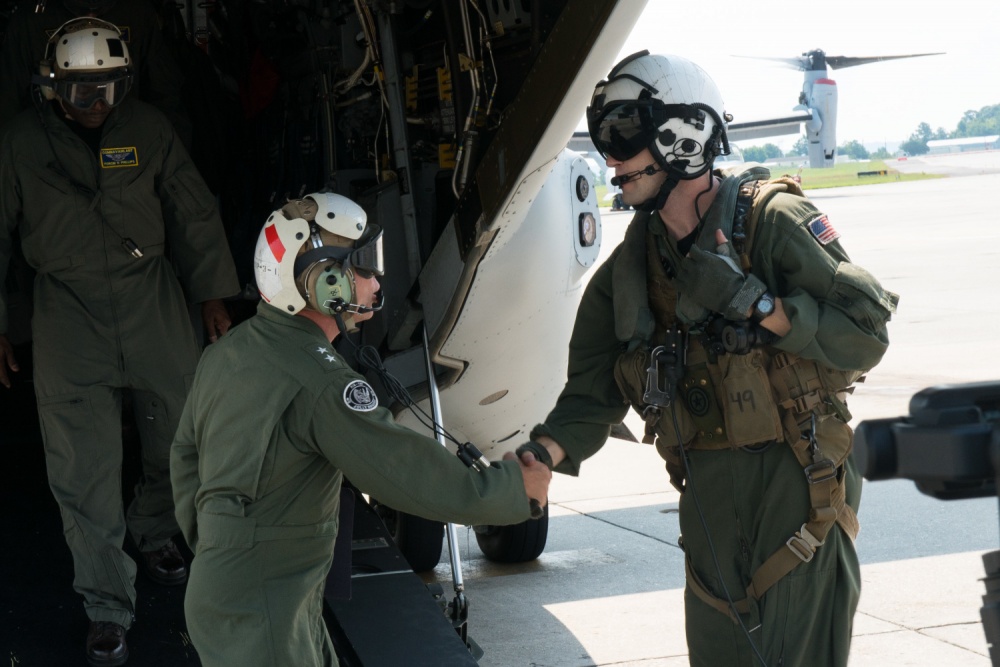 For the first time ever, an all-Navy crew flew a MV-22B Osprey on Thursday, traveling from Naval Station Norfolk, Va. to Marine Corps Air Station New River in Jacksonville, N.C.

The relatively short flight was performed by two pilots and two aircrewmen from the Airborne Command and Control and Logistics Wing (ACCLOGWING) Medium Tilt Rotor Training Squadron Detachment (VMTT Det.) 204, which will be the first detachment operating and maintaining the Osprey in the fleet, according to the Navy.

Joining the crew during Thursday’s first all-Navy flight was Rear Adm. Roy Kelley, the commander of Naval Air Force Atlantic. Speaking to the detachment during an all-hands event after the flight, Kelley, according to a Navy release, said, “You are all pioneers and as we move into a new platform and I think you all really have an opportunity to lay the keel for where this community is going to go.”

Thursday’s flight was significant because it portends to the not-too-distant future when the Navy will lean on the Osprey’s capacity to haul people, mail, supplies and spare parts to aircraft carriers at sea.

Late last month, as part of a $4.2 billion contract modification with Bell-Boeing, the Navy purchased its first 39 Ospreys to be used as carrier onboard delivery aircraft. These CMV-22B Osprey tiltrotor aircraft will replace the Navy’s aging fleet of 27 C-2A Greyhound turbo-prop aircraft, which started service as the Navy’s COD aircraft in the 1960s.

The Osprey COD program is expected to achieve initial operating capability in 2021 and will be fielded to the fleet by the mid-2020s, according to Navy officials.

“Today’s visit was special,” Capt. Matthew Duffy, ACCLOGWING Deputy Commodore, said in a statement. “We had an opportunity to accompany Rear Adm. Kelley, Commander, Naval Air Force Atlantic, down to Marine Corps Air Station New River to visit the 70 Navy Sailors, the plank owners, the first generation of pilots, aircrewmen and maintenance technicians that are in training, right now, to fly the Osprey. Today was also a historic day because our flight with Rear Adm. Kelley was the first time that the entire flight crew for the Osprey was all Navy, both pilots both crew chiefs for the first time in history. This was truly a special day for Naval aviation and another milestone in the Osprey program.”

Editor’s Note: We are focusing on the Osprey and the CH-53K at New River this year.

Also, the evolution of Osprey nation is an important theme as well.

As New River expands its training efforts to encompass the US Navy and the Japanese, we will highlight that evolution as well.