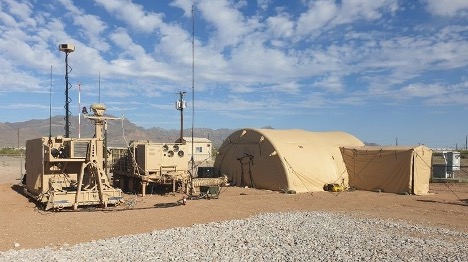 The Northrop Grumman Integrated Battle Command System (IBCS) being developed for the US Army has successfully conducted a multiple target engagement during testing at the White Sands Missile Range in New Mexico.

The testing is being conducted as part of the IBCS Limited User Test (LUT) which is designed to demonstrate the system’s ability to fuse data from multiple sensors and thus maintain continuous track of targets in contested environment conditions.

The first planned operational flight test was conducted US Army personnel, and comprised an air and missile defence task force of two Battery and one Battalion engagement operations centres, two Patriot and Sentinel radars, and three Patriot Advanced Capability Three (PAC-3) launchers, all of which were connected at the component level to the IBCS Integrated Fire Control Network (IFCN).

The targets were two cruise missile surrogate threats which flew at low altitude and in a manoeuvring formation through a mountain. The IBCS fused real-time data from all sensors into a single, accurate composite track for each threat, presented engagement solutions, and two PAC-3 missiles were launched and controlled by IBCS to successfully intercept both threats.

“We are extremely pleased with how IBCS performed during this flight test,” Northrop Grumman’s vice president and general manager of combat systems and mission readiness, Kenn Todorov said in a statement. “We have been working on an extraordinary command and control system in partnership with the US Army, and our goals are the same – to get this capability into the hands of the warfighter as soon as possible.”

IBCS is expected to be a key element of any involvement Northrop Grumman may have in the ADF’s AIR 6500 integrated battle management system program.