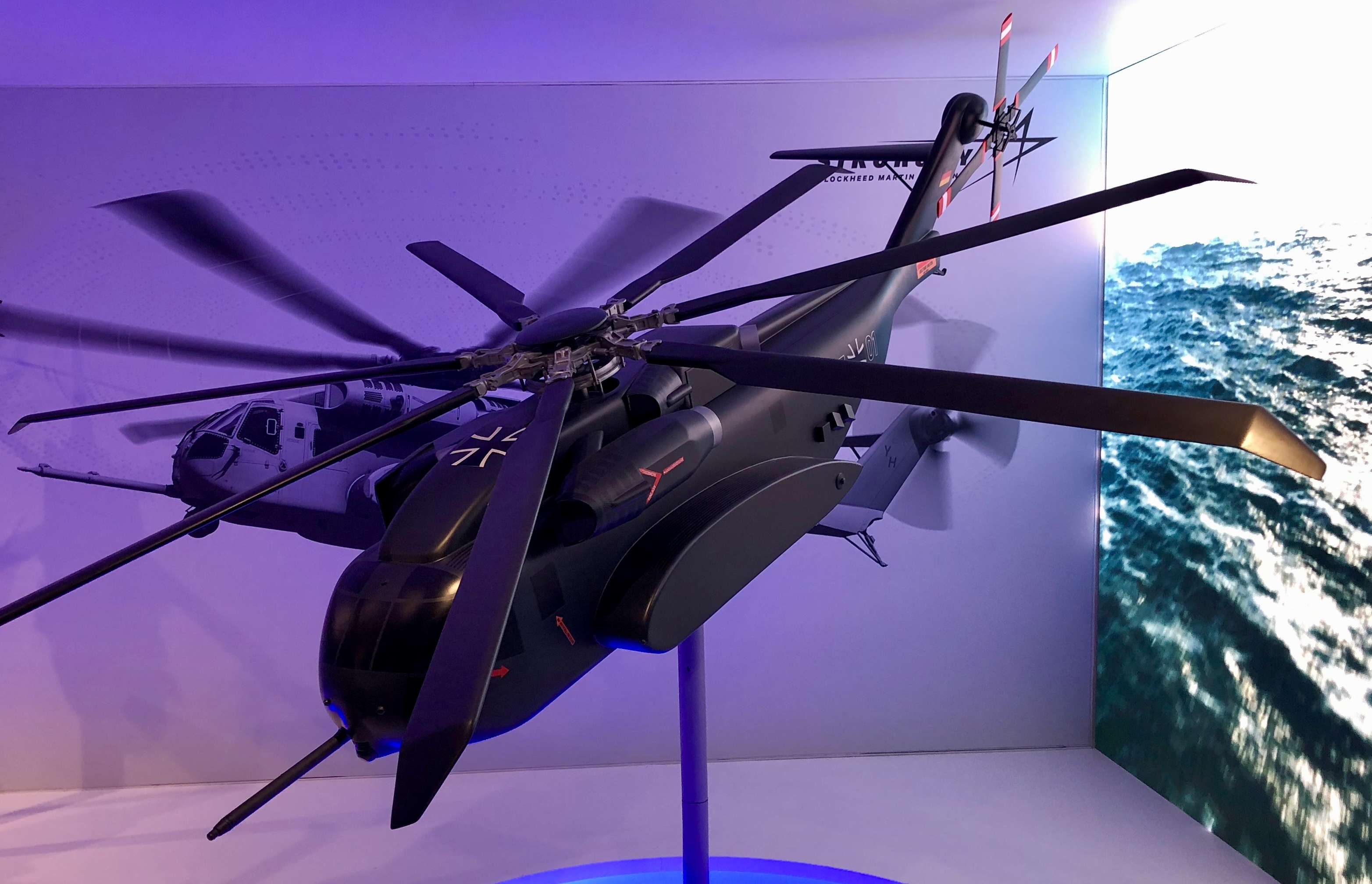 On June 18, 2019, the President of Sikorsky, Dan Schultz, himself a former CH-53-E pilot, provided an overview brief on the CH-53K and their offering for both Germany and Israel.

He was joined by John Rucci, Senior Experimental Test Pilot, who was in the Lockheed chalet, working with reporters on the CH-53 K flight simulator and by Beth Parcella, the Director of the International CH-53K program.

The briefing to reporters started with a focus on how the aircraft could perform in brownout and degraded conditions.

The video and the discussion by both Schultz and Rucci highlighted the capability of the aircraft to operate in very difficult operational conditions in a way neither the Chinook nor the E could do.

This is due to the fly by wire system onboard the aircraft and other digital tools which allow for stable flight in a wide variety of operational conditions.

This is crucial for the Marines as they transition from the land wars to operating in all climes globally and flying to the crisis rather than primarily focusing on Middle East operating conditions.

My visit to MAWTS-1 last year in Yuma Arizona highlighted how significant the transition which the Marines are undergoing to deal with the strategic shift facing the United States and its allies, and clearly the K is being relied on as a key piece of the combat capability allowing the Marines to operate and prevail in contested combat operations.

The digital nature of the aircraft was highlighted in terms of how “big data” life cycle support was a key part of CH-53K operations.

Schultz noted that the Sikorsky experience with the S-92 was especially important in terms of providing the kind of reliability through data which the Ch-53K has as well.

The CH-53K has a built in HUMS or health management system which provides real time data on performance and maintainability, which provides the military customer with a significant advance over mechanical systems like the Chinook or the E, and which provide built-in operational and sustainability advantages.

I visited the S-92 global management operation, and clearly, the S-92 has provided Sikorsky with key abilities to understand how to provide global support to operating aircraft in very different geographical situations as well.

Schultz spent some time highlighting the advantages of the K from the standpoint of maintainability or sustainability.

He noted that, for example, even though the gearbox on the K is much more powerful than that of the E, it operates with 40% less parts.

He noted as well that the aircraft was designed to make it more flexible in a number of ways.

He mentioned as well the capability of the aircraft be carried by a large lift aircraft like the C-17 and being able to re-assembled much more quickly than a legacy system like the E.

With regard to international partners, the aircraft was very adjustable to the needs of new partners.

It is a digital aircraft with software upgradeability built in, and when I visited the Sikorsky facility in Connecticut last year, I talked with software engineers about the flexibility of adapting software to partner needs.

The offering to Germany provides an F-35 like partnership in which German partners would be providing parts not just to the German CH-53K but to the overall global program.

For Germany, the K clearly would be part of how they might adjust flexibility to the strategic shift facing the liberal democracies in dealing with the Russians.

For example, Germany needs to rapidly reinforce their Baltic brigade or move forces forward to reinforce Poland in a crisis.

Compared to Chinook, the K goes further, faster and brings a significantly greater combat load to the fight rapidly.

And flying with the A400 M or the C-130J, the ability to carry standard pallets means a rapid movement of cargo from an airlifter to the K to move support within an area of interest.

And the K is changing as well the meaning of what a support helo really is.

It is in an information or C2 asset through the nature of the cockpit and how information can be managed within the cockpit or delivered to the combat soldiers onboard the aircraft.

This means that for Germany, the K is already FCAS enabled, or able to operate in a combat cloud in a way certainly neither the E nor the Chinook can do.

In Germany, Sikorsky is partnered with Rheinmetall, a company with demonstrated capability to support ground combat forces, and which is investing in transferring that capability to the helo support domain.

The German MoD is looking for the replacement helicopter for the legacy CH-53s to be part of launch to a new sustainment approach.

The MoD is looking for innovative new approaches to sustainment, and certainly this is something which the US Navy and Marine Corps are investing heavily in, as evidenced by the log demo team operating in USMC Air Station New River.

In short, the US Navy and the USMC working with Sikorsky are making available to our core allies a significant 21st century combat platform, one which is tailored to work the concepts of operations required to support effectively the strategic shift which are forces face when facing 21st century authoritarian competitors.