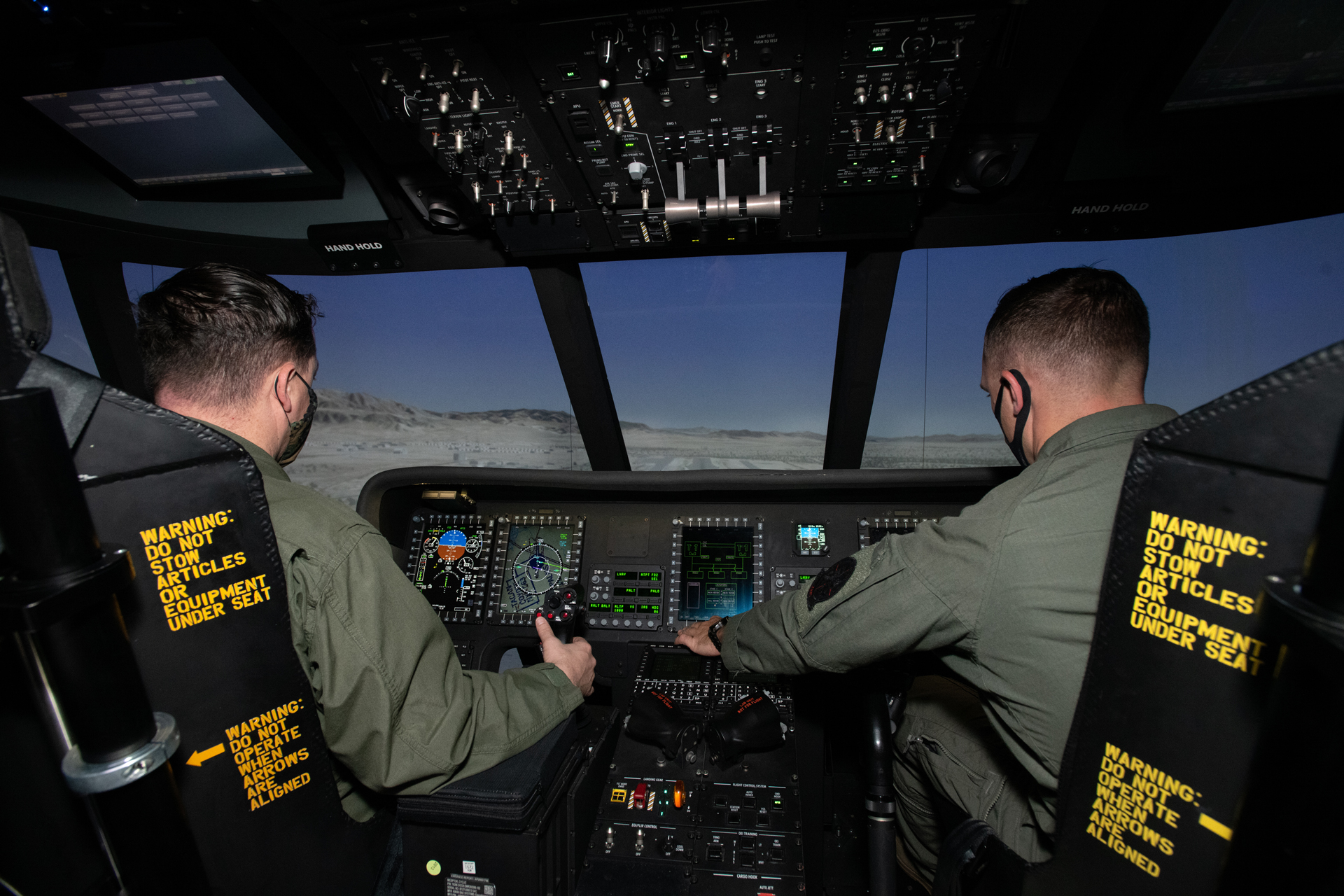 On December 3, 2020, during my visit to New River, I experienced flying in the cockpit of the Marine Corps’s latest key air capability, the CH-53K.

I was in the cockpit with LtCol Luke “Amber” Frank, the VMX-1 Detachment OIC.

He is a very experienced  Marine Corps pilot having flown virtually every type of rotorcraft the Marine Corps has, including being a presidential pilot as well.

And in a story published on December 16, 2020, I described the experience as follows:

So where did this flight happen?

In the new flight simulator which has been built and is operating at VMX-1.

The man-machine working relationship is a central part of the flight experience, with new capabilities crucial to mission success built around key man-machine capabilities.

A central one is the ability of the aircraft to hover with the automatic system, which allows pilots to operate in very degraded operating conditions to put down their aircraft at desired locations to deliver their payloads.

During our flight, in spite of the bright clear but cold day outside, we experienced several difficult landings in degraded conditions, dust storms, turbulence, and various challenging situations to land the aircraft.

Why does this matter in terms of concepts of operations?

This means that the crew can deliver the payload, Marines or cargo, to the area which is desired in terms of commander’s intent with regard to the landing zone selected for maximum combat effectiveness.

If one is inserting a force to support an effort to destroy key enemy capabilities, being able to take the right kind of situational awareness and land EXACTLY where the commander has determined the force could have the highest combat effect is a core combat capability with tactical and even potentially strategic effect.

This is how a capability within a new aircraft translates into enhanced probability for combat success.

And if you are an allied military which needs capability to insert force rapidly in special operations environment, the CH-53K could be a game changing capability for force insertion.

Recently, a Lockheed Martin press release issued on August 17, 2022, provided an update on the U.S. Navy’s acquisition of additional flight simulators as the CH-53K fleet is stood up.

The United States Marines will gain additional training opportunities preparing them to operate the Sikorsky CH-53K heavy lift helicopter. The aircraft is the  most modern and powerful helicopter in Department of Defense inventory capable of moving troops and equipment from ship to shore, and to higher altitude terrain, more quickly and effectively than ever before.

Lockheed Martin will provide an additional Containerized Flight Training Device (CFTD) to the U.S. Navy with options for three more under the terms of a recent contract award. This follows up on the success of the first training device delivered in 2020 to Marine Corps Air Station (MCAS) New River in Jacksonville, North Carolina.

Marine pilots have smoothly transitioned from the training device to the actual CH-53K’s fly-by-wire cockpit and completed missions in the fleet environment – such as air-to-air refueling” said Flash Kinloch, Lockheed Martin, vice president of Training and Simulation Solutions. “Training in this highly immersive virtual environment permits flight crews to train the full scope of tasks that can be performed on the aircraft in a safe, cost effective and realistic manner.”

Flight crews will train on the full scope of Marine Corps heavy lift missions, including external lift operations, using the full-mission flight simulator that also replicates the various environmental conditions in which the aircraft is likely to fly. Through this new effort, Lockheed Martin is helping the Marine Corps expand proven and critical CH-53K Flight Training with training capability to more Marines.

The training devices include a full cockpit for the aircraft operated by a pilot and co-pilot, an instructor operating station as well as a brief/debrief room. The newest training devices will include upgrades that improve system performance, increase cost savings, and more closely align to the CH-53K aircraft for increased training realism.