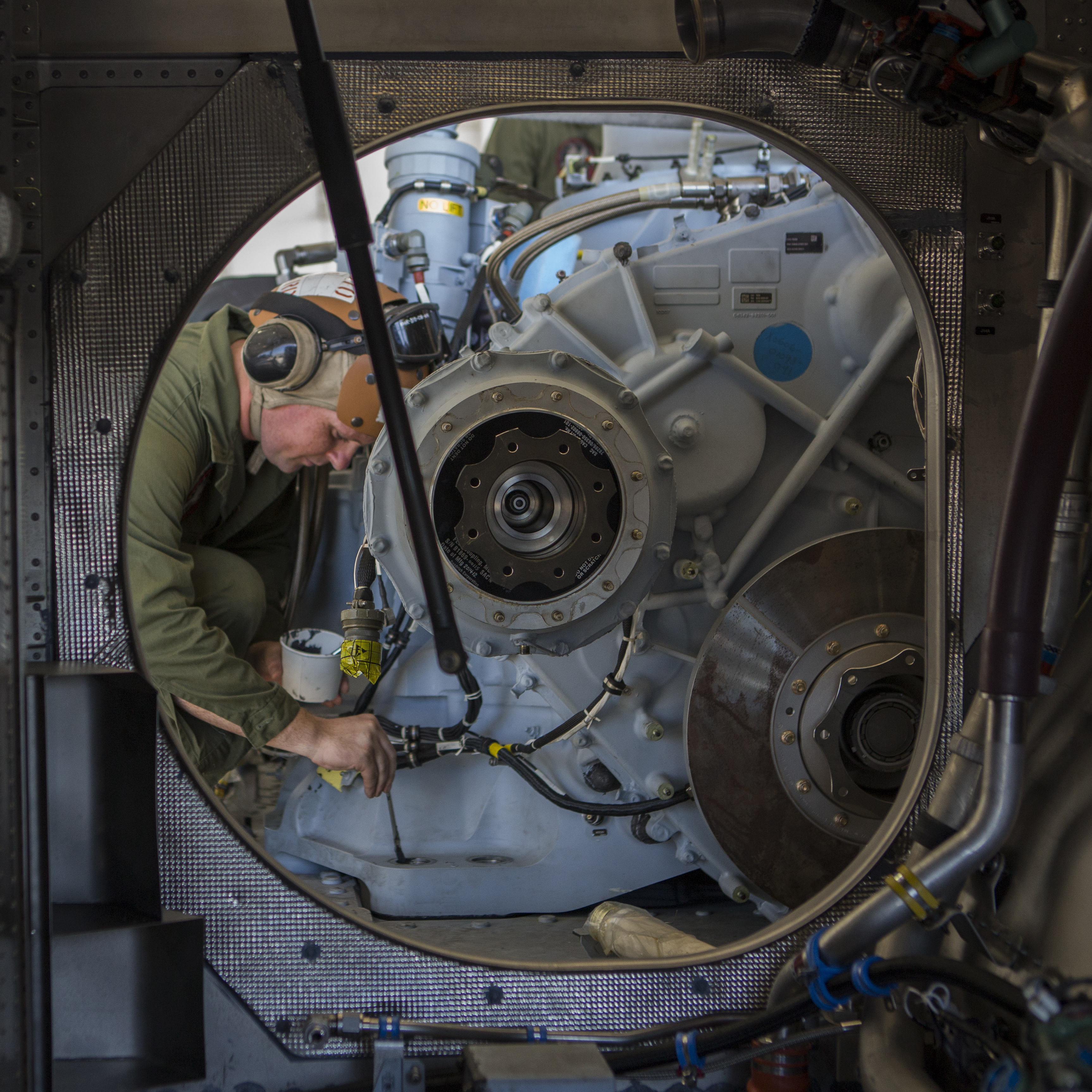 The recently published Marine Corps Aviation plan, 2019 provided an overview and update with regard to the CH-53k program.

The CH-53E Super Stallion entered service in 1981 and is the only heavy lift helicopter in the DoD rotorcraft inventory.

The current force of eight active component HMHs and one reserve component HMH(-) has supported heavy lift assault support operations across the globe. This ship-to-shore vertical connecter routinely transports loads in excess of four and one-half tons out to 110 nautical miles, providing the MAGTF and joint force with the ability to quickly mass combat power.

Additionally, the Super Stallion’s heavy lift capability, combined with its global amphibious presence, has made it an indispensable strategic asset when responding to both regional hot spots and humanitarian assistance alike.

The CH-53K “King Stallion” is an optimized vertical, heavy lift, sea- based, long range solution for the MAGTF and will immediately provide three times the lift capability of its predecessor. It will be the only fully- marinized, heavy-lift helicopter capable of transporting one hundred percent of the vertical MAGTF. It also boast a wider cabin than its predecessor and internally carry a HMMMV, as well as the large TRANSCOM 463L pallets.

The new external cargo system is comprised of three independent hooks which enable single-, dual- and triple-load operations. This expanded capability facilitates the distribution of three different loads to three different locations while executing one sortie.

The most notable attribute of the King Stallion is its ability to maintain increased performance margins in a degraded aeronautical environment (e.g. High: 3000’ / Hot: 95°F / Heavy: 27,000 pounds out to 110 NM).

This translates to any of the following load configurations: 2 x armored HMMWVs, 2 x ECVs, or a JLTV.

The increased heavy lift capability of the CH-53K is unprecedented within MAGTF and joint force and empowers the Marine Corps function as the “contact” and “blunt” layer within the National Defense Strategy.

Planners and decision makers will embrace a new era of capability that allows the quick massing of combat power, agile maneuver, resilient logistics and predictive maintenance, all under the unifying theme of multi-domain attack.

Support the MAGTF commander by providing assault support transport of heavy equipment, combat troops, and supplies, day or night, under all weather conditions during expeditionary, joint, or combined operations.

In response to readiness challenges in the CH-53E community, the USMC chartered the Super Stallion Independent Readiness Review (SSIRR). This assessment was conducted by a team of senior functional area experts. This team’s scrutiny of the CH-53E fleet’s material condition, maintenance practices, operations, and logistical support identified various issues and gaps. Root cause analysis further refined the team’s findings and developed courses of action to achieve and maintain T-2.0 through Full Operational Capability (FOC) of the CH-53K in 2029.

The SSIRR recovery plan has multiple lines of effort, with the largest’s being reset of the entire CH-53E aircraft fleet. Approximately 33% of the fleet has been reset, with another 10% in flow: this is a quarter of the fleet all told. Results include decreased maintenance man hours per flight hour, reduction in cost per flight hour, a stimulated and more responsive supply chain and, most notably, a higher state of readiness for the reset fleet. Reset aircraft have flown more than 9200 hours to date, enabling greater average flight hours per pilot per month and higher T-ratings.

Remaining sustainment efforts reinforce the scope and expenditures of reset; their significance and results cannot be understated. From IMRL/SE procurement to standardizing functional check flight training, every line of effort has contributed to moving the readiness needle. The increased allocation of Portable Electronic Maintenance Aids (PEMAs) and the correction of greater than 1600 Technical Publication Discrepancy Reports (TPDRs) has not only economized maintainer time, but also restored confidence in the accuracy of maintenance publications.

The CH-53K King Stallion is currently in developmental test phase and will replace the CH-53E Super Stallion starting in FY22. The physical foot print of the CH-53K is equivalent to the CH-53E while its logistical footprint has been reduced. Other improvements include: modern glass cockpit, fly-by-wire flight controls, efficient 4th generation main rotor blades, and an engine which produces 57% more horsepower with 63% fewer parts relative to its predecessor.

The King Stallion’s increased capabilities, reliability and ease of maintenance will set a new standard for vertical heavy lift.

The Super Stallion’s heavy lift capability, combined with its global amphibious presence, has made it an indispensable asset when responding to both regional hot spots and humanitarian assistance alike.

Marine Corps CH-53 squadrons are organized to support the specific requirements of the MAGTF. A CH-53 squadron is designed to be task organized and is manned, trained and equipped in the following manner:

It is very important to note that a temp squadron cannot source three .25 requirements simultaneously.

Additionally, in the current structure a 1.0 requirement would require the sourcing squadron to be complemented by a .25 detachment from an adjacent unit.

The CH-53K will return the heavy lift community to 16 aircraft per squadron. This will be enabled by the fielding of new CH-53Ks and the capitalization of CH-53E inventory from transitioning squadrons.

Of note, the 200 aircraft program of record is 20 aircraft short of the 220 requirement due to fiscal constraints.

The Marine Corps will procure a total of 200 CH-53Ks in the following squadron beddown:

The Marine Corps will start the CH-53K transition in FY21 with the declaration of IOC.

It will take approximately 18 months for each CH- 53E squadron to transition.

In approximately FY24, the first CH-53K MEU detachment will CHOP and set the initial conditions for sustained CH-53K MEUs.

The supportability of this deployment event is driven by aircraft procurement and the ability to sustain CH-53K deployments thereafter.

The Okinawa Unit Deployment Program (UDP) and its associated MEU will transition to CH-53K shortly after the CONUS- sourced MEUs are transitioned.

During the CH-53K transition, CH-53E/K personnel will be segregated to the max extent possible.

The only exception to this policy will be VMX-1. For a short time, VMX-1 pilots and maintainers will be dual-series qualified until VMX-1 divests of CH-53E operational test responsibilities. 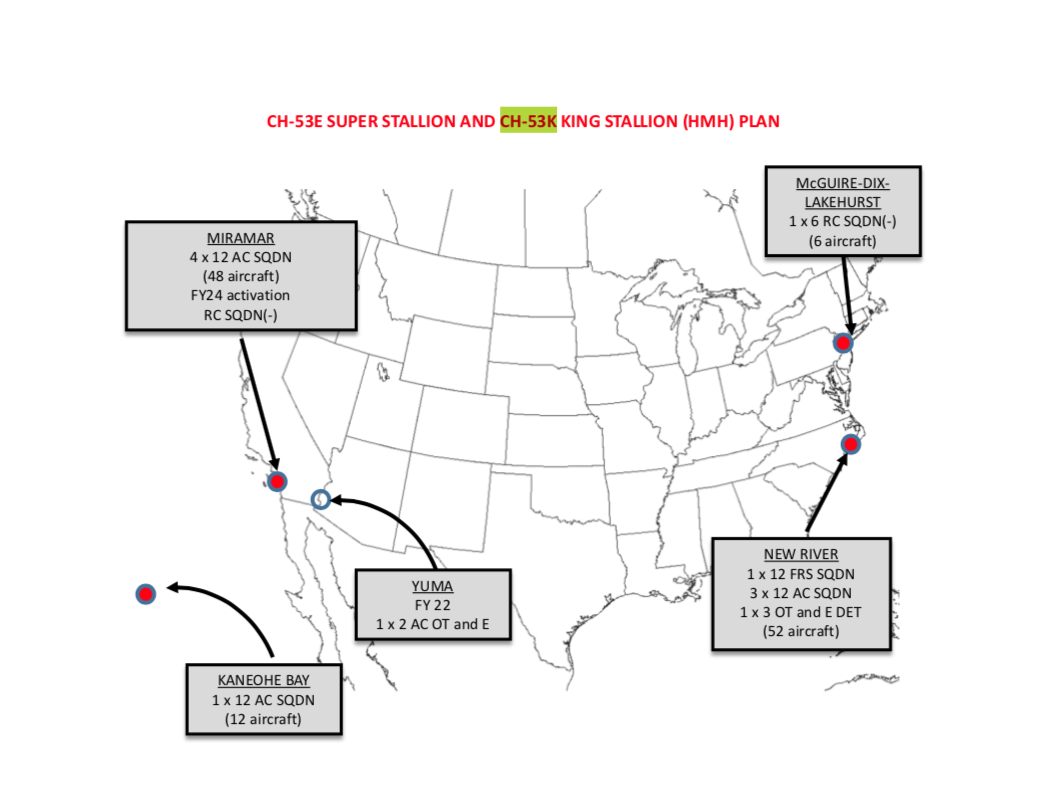 During that transition from the CH-46 to the MV-22, the last HMM scheduled for transition was re- designated as an HMMT and assumed the CH-46 FRS role. These responsibilities were in effect until the demand signal for initial pilot training ceased. The squadron re-designated back to an HMM well prior to its V-22 transition.

Similarly, the CH-53 FRS will reach a tipping point where the majority of its focus will shift from CH-53E to CH-53K. To enable this action, a tactical HMH will be required to assume CH-53E FRS responsibilities for the remainder of the transition. These actions will enable maximum CH-53K FRS flexibility while sustaining the legacy FRS production.

The status of TMS-specific MOSs in the Marine heavy helicopter community continues to be healthy. As with the rest of Marine aviation, however, there are grade disparities that exist within the aircrew and maintainer inventories as a result of the force–shaping tools used during the 202K downsizing.

HQMC Aviation ensures the force structure requirement is accurate in order to provide the correct demand signal to planners and assignments monitors at Manpower and Reserve Affairs.

The Marine Corps’ Total Force Structure Management System (TFSMS) and unit tables of organization reflect the majority of the CH-53K transition depicted in the AvPlan.

However, HQMC must still find structure for the planned activation of HMH-769(-) in FY26. The CH-53 cell continues to focus on setting proper conditions for the successful transition to the CH-53K, while not increasing overall aviation force structure. HQMC Aviation has several ongoing initiatives to ensure the correct force structure and subsequent inventory is in place to facilitate a smooth transition.

The FY18 MOS Manual establishes the skill designator of 7511 for CH- 53K qualified pilots and 6053 for enlisted maintenance personnel and aircrew. As of October 2017, Marines who meet the requirements for the MOS are authorized to add 7511 or 6053 as an additional MOS in the Marine Corps Total Force System. The ability to identify personnel with CH-53K training will inform manpower processes and enable a successful transition by keeping trained personnel in critical billets.

HQMC Aviation is updating the initial force structure laydown for CH- 53K stakeholders to ensure the continued accomplishment of developmental and operational testing and officer and enlisted student training.

To that end, VMX-1 and HX-21 will have the necessary force structure to achieve the assigned tasks while building the inventory to staff HMHT-302 and HMH-366.

In FY26, the Reserve Component will re-activate HMH-769 at a location in the western United States to be determined. This will provide the reserve component with two HMH(-)s, one on each coast. HMH-769 will also assume CH-53E CAT IV (refresher training) once CAT I-III requirement no longer exists. These two reserve squadrons will be capable of providing GFM relief for active component squadrons executing the CH-53K transition.

Marine reserve integration of the CH-53K begins in FY22 when HMH-772 (-) returns to its full complement of CH-53E aircraft and eventually transitions to the CH-53K in FY29.

The CH-53K transition will be complete with the final 4MAW squadron (HMH-769) transitioning in FY32.

INITIATIVES AND WAY AHEAD

The five year horizon for the CH-53 community includes:

1)  Continued execution of the CH-53E readiness recovery and sustainment plans.

3)  IOC of the first CH-53K detachment, subsequent initial transition of the first tactical squadron and FRS, and initial MEU CHOP in FY24

4)  Complete reset of the entire CH-53E fleet of aircraft.

2)  EDMs- envelope expansion, Survey and Qualification Demonstration, Shipboard testing, air-to-air Refueling, Technical evaluation, REV2D (deferred capabilities testing) and P3I (what are the capabilities and what is required to be added).

Maintainers have been reviewing and studying the K variant since its arrival in May to improve logistics and maintenance when the helicopter is fully implemented next year. 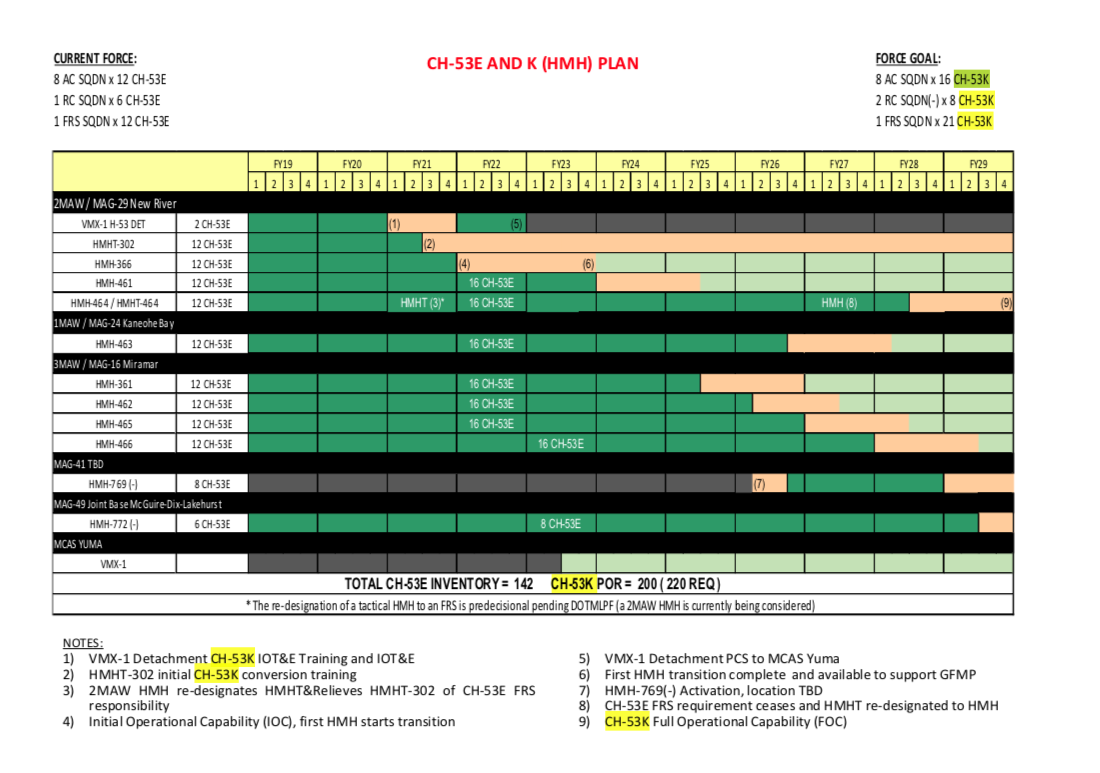