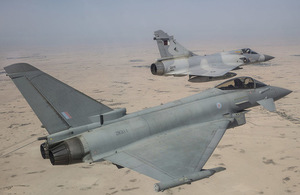 The Saudis have been key customers for the UK with regard to Typhoon and have invested in upgrades common to their two fleets as well as benefited from British experience with maintaining the aircraft.

With the agreement concluded earlier this year to buy an additional 48 Typhoons, the Saudis have one of the largest Eurofighter forces, larger than every member of the European consortium, except for the UK itself and possibly Germany, dependent on which estimate one takes with regard to operational Eurofighters in the German Air Force.

According to a Robert Wall piece published on March 9, 2018 in the Wall Street Journal:

BAE may assemble some of the planes in Saudi Arabia. Riyadh, which sought local production on the original Typhoon contract before dropping the idea, has signaled it still has the ambition to assemble planes domestically.

Mr. Woodburn said the defense contractor would support Saudi’s industrial ambitions laid out in the country’s Vision 2030, a plan to make the kingdom’s economy less dependent on oil revenue.

In a story published on September 18, 2018 by the UK Ministry of Defence, the completion of the first payment by the Qataris to buy 24 Typhoons was highlighted.

The deal, worth around £5bn includes the aircraft and a bespoke support and training package. Qatar is now buying nine Hawk trainers, rather than six, which will also be welcome news for BAE Systems’ factories in Warton and Brough which make the jets.

“This monumental, multi-billion-pound deal is now officially in place, and those from across government and industry who have worked so hard on it together can be extremely proud to see it reach this stage. It’s a massive boost to the British defence industry, helping to support thousands of jobs, and it will help us further build the trust between the UK and Qatar to tackle the challenges we both share, support stability in the region and deliver security at home.

“UK Export Finance’s (UKEF) £5bn package of support was vital to securing the deal, including by providing financing and insurance. UKEF’s role is to support UK exports including by providing export finance to enable overseas buyers to purchase goods and services from the UK, and export insurance for companies selling overseas.”

“The UK Government is proud to be a part of this hugely significant export contract, supporting BAE Systems, its nearly 35,000 employees and the 9,000 companies in its supply chain.

This support from UK Export Finance will sustain jobs in one of the UK’s key industrial sectors, support economic growth, and strengthen our own defence capabilities as well as those of a key strategic ally.”

“This contract, effective today, represents a significant step in BAE Systems’ long-term relationship with the State of Qatar, as it becomes the ninth country to choose Typhoon. The proven combination of Typhoon and Hawk will provide the Qatari Armed Forces with the most advanced and flexible multi-role combat aircraft on the market today, along with best in class support and training.”

The Defence Secretary Gavin Williamson and his Qatari counterpart, Dr Khalid bin Mohammed al Attiyah, oversaw the signing of the deal in Doha in December. Deliveries of the first Typhoon aircraft are expected to commence in 2022.

The deal also involves a package of training and co-operation between the British and Qatari Air Forces which will see them working closely together in the future.

A new UK-based Typhoon joint squadron, reformed as No.12 squadron, will comprise both Qatari Emiri Air Force and RAF personnel, including pilots and ground-crew based at RAF Coningsby in Lincolnshire ahead of the delivery of the aircraft.

It represents a unique initiative, with the RAF not having formed a squadron with another nation since the Second World War and the Battle of Britain.

The UK and Qatar share mutual interests in countering violent extremism, and ensuring stability in the region, and the deal further reinforces those ties by helping to prevent terrorism from spreading and protecting the prosperity and security of the UK at home.

Qatar is the ninth country to purchase the Typhoon, with the deal sustaining thousands of UK jobs. The MOD continues to bang the drum for the UK’s world-leading aerospace industry, with sales of defence equipment to foreign customers surging by 53% last year to £9bn.

The UK is a world-leader in the combat air sector, with a mix of skills and technologies unique in Europe, supporting over 18,000 highly skilled jobs. The sector delivers a turnover of more than £6bn a year and has made up over 80% of defence exports from the UK over the last ten years.

The support follows the launch of the Government’s Export Strategy, which sets out how the government will support businesses of all sizes to make the most of the opportunities presented by markets around the world.

The featured photo shows a RAF Typhoon (foreground) and a QEAF Mirage jet taking part in a joint exercise held by the Emir of Qatar’s Air Force.