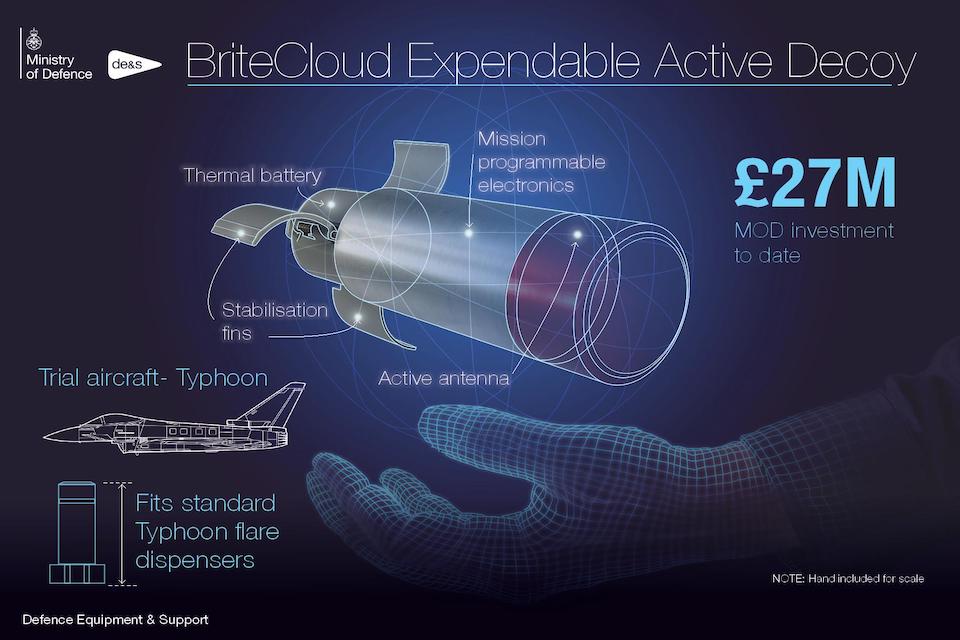 According to an article published by the UK Ministry of Defence on May 23, 2019, RAF Typhoons are trialling BriteCloud.

Speaking at the Typhoon Ministerial Meeting in Germany, Defence Minister Stuart Andrew announced the beginning of a series of capability tests of BriteCloud, a drinks-can sized missile decoy to protect combat jets from the latest radar-guided missiles.

BriteCloud uses powerful radar emissions to disrupt the targeting system within air-to-air and surface-to-air missiles, drawing them away to a safe distance. The device can be fired from an aircraft flare dispenser without the need for modification to the aircraft.

Designed and manufactured in Luton by Leonardo, the miniature decoy has been tested and released for the first time aboard the RAF’s fleet of Typhoon aircraft. The MOD has been working with Leonardo on the development of BriteCloud since 2012 and has so far invested £27m in the system, with the project sustaining 50 jobs in Luton.

“Britecloud offers the RAF a powerful and cost-effective way to keep our pilots safer than ever on the frontline…..”

The first Britecould trial with Typhoon aircraft took place in the UK in April. Thirty three BriteCloud 55 rounds were dispensed from aircraft flown by the RAF’s 41 Test and Evaluation Squadron against a range of threats designed to mirror those faced on the battlefield.

Further trials are planned to ensure the decoy launches safely from the aircraft and to develop a range of operational uses for the technology on the battlefield, including adding the devices to military helicopters and C-130 Hercules aircraft. The Typhoon trials will also inform how such decoys could be used on the RAF’s Lightning stealth jets.

Should the trials be succesful, the devices will be available for frontline aircrews by the end of 2019.

Our ongoing partnership with Leonardo continues to drive vital research and development that leads to the kind of innovation demanded by our RAF today. The trials of BriteCloud on Typhoon demonstrates how we are constantly striving to find a technological edge and protect our service personnel.

“The initial flight-trial of Bright-cloud from RAF Typhoon aircraft was a key milestone in moving closer towards a viable and extremely valuable capability for the warfighter; trials will now move to operational testing and validation before the initial operating capability is declared, planned at this time for later in 2019….”