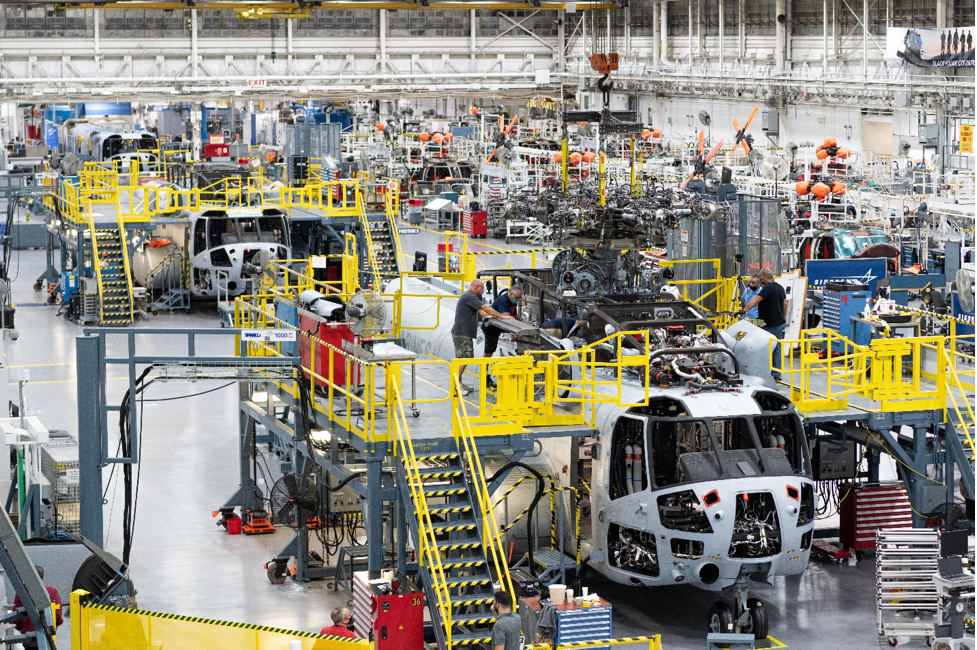 Stratford, Conn., Sept. 24, 2021 – Sikorsky, a Lockheed Martin company, today celebrated the first Connecticut-built CH-53K heavy-lift helicopter that will be delivered to the U.S. Marine Corps. This helicopter, which moves more troops and cargo more rapidly  from ship to shore, was the first all digitally designed helicopter.

“This Connecticut-built CH-53K aircraft is a testament to the Sikorsky legacy of building safe, reliable rotorcraft  for decades. But the way we design, test and build helicopters has transformed,” said Paul Lemmo, President, Sikorsky.

“Our employees are using digital tools and other advanced technologies such as manufacturing simulation and 3D laser inspection technology. This factory transformation is a model for all future helicopter programs at Sikorsky.”

This King Stallion™ helicopter will be stationed at Marine Corps Aviation Station New River in Jacksonville, North Carolina where Marines will conduct training flights and support the fleet with heavy-lift missions with the aircraft in preparation for the CH-53K’s first deployment in 2024.

This heavy-lift helicopter is part of a 200 aircraft Program of Record for the Marine Corps with a total of 33 aircraft currently on contract and an additional nine on contract for long lead parts.

“The CH-53K  helicopter provides advanced capabilities allowing Marines to get anywhere in the world where the mission requires heavy-lift logistics support,” said Deputy Commandant for Aviation, Lt. Gen. Mark R. Wise during a ceremony at Sikorsky.  “This helicopter is a much safer aircraft because it can maneuver in low visibility environments. It will forward deploy Marines quickly and effectively.”

The factory floor at Sikorsky is active with six CH-53K aircraft in build, and there are 36 more in various stages of production including the nine that we are procuring long lead parts for. Sikorsky has made significant investments in workforce training, tooling, and machinery to increase the number of aircraft built and delivered year over year.

This is the first CH-53K helicopter to roll off the Stratford, Connecticut production line, with the next one set to be delivered in early 2022. Since October 2020, Sikorsky has delivered three operational CH-53K King Stallion heavy-lift helicopters to the U.S. Marine Corps in Jacksonville, North Carolina.

Flying in the Fleet Environment

The CH-53K program entered initial Operational Test & Evaluation (IOT&E) in July. Four aircraft are now in the hands of VMX-1 operational and test evaluation squadron.  Marine pilots and maintainers are operating the CH-53K in a fleet environment as part of the rigorous test program.

Marines are learning to fly and maintain the CH-53K using a suite of training devices developed by Sikorsky. Pilots receive hands-on training by experiencing a highly immersive virtual environment in the Containerized Flight Training Device (CTFD). The CFTD replicates the functionality, flight characteristics, mission profiles, and unmatched capabilities of the CH-53K helicopter. The device can replicate the various environmental conditions that the aircraft is likely to fly in as well as a multitude of mission profiles in the operation of a true heavy-lift helicopter.

Maintenance personnel also prepare with a virtual aircraft environment through the Helicopter Emulation Maintenance Trainer. Marines train with an immersive experience to practice avionics and airframe maintenance in the schoolhouse in order to be fully prepared to perform maintenance on their fleet aircraft.

The CH-53K is the only sea-based, long range, heavy-lift helicopter in production and will immediately provide three times the lift capability of its predecessor.

The CH-53K will further support the U.S. Marine Corps in its mission to conduct expeditionary heavy-lift assault transport of armored vehicles, equipment and personnel to support distributed operations deep inland from a sea-based center of operations, critical in the Indo-Pacific region.

The new CH-53K has heavy-lift capabilities that exceed all other DoD rotary wing-platforms, and it is the only heavy-lifter that will remain in production through 2032 and beyond.