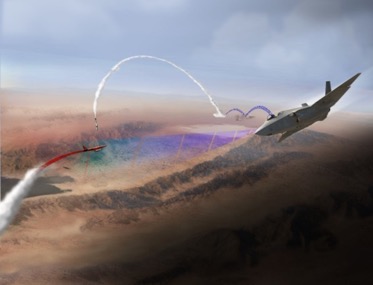 With the introduction of new communications and video technologies, military decision making has changed over the past twenty years.

A significant point of change was the introduction of Rover which created what Secretary Wynne, under whose mandate Rover was introduced, referred to as the democratization of the battlefield.

In a 2012 interview with one of the key shapers of the Rover technology, the impact of Rover on C2 was highlighted.

Rover has been a key element of democratizing the battlefield.

The General has the generally same picture as the guy in the field does.

And this rover essentially creates a horizontal command structure where any Special Forces Team or Captain or a Lieutenant on the ground or a Battalion Commander or a theater committee can call in the air strike commensurate with the Rules of Engagement (ROE).

It’s really the story about the JTACS and how they into very effective fighting tools that we have used in Iraq and Afghanistan.

The Rover System from ICSA, LLC

This democratization of the battlefield has unfolded in the context of the land wars in the Middle East and has been an essential part of a significant reshaping of what air support means to the ground forces.

With the strategic shift from the land wars to higher intensity operations, how then to replicate the Rover experience but to do so for the distributed force operating in much higher tempo operations?

As noted in the last piece in this series on distributed C2, the coming of the F-35 and its sensor fusion provides a significant foundation for rethinking how C2 at the tactical edge could occur.

In some ways this is just the beginning of a significant shift in the capability which can be unleashed by new technologies and new approaches to command and control.

A key technology which could drive such change is the delivery of ubiquitous full motion video, embedded with overlays which can provide dynamical contextual awareness to the warfighter at the tactical edge.

With a proliferation of decision-making technology, risk can be reduced and decisions made more rapidly and with better outcomes.

But for a full motion video enabled force with embedded overlays to lead to the kind of change, which inherently it could, two related capabilities need to occur.

First, senior commanders have to avoid detail management through C2 intrusiveness and to focus on appropriate mission command.

The practices of the past twenty years where video technologies have often been used for intrusive controls at the tactical edge by senior commanders simply will not work in a high tempo operational environment and will take away the advantages which could accrue to a distributed force.

And, secondly, operators at the tactical edge need to learn how to make decisions using the context provided via overlays to the full motion video.

They need to understand how to implement mission command in a high tempo environment with enhanced decision-making tools made available to them.

In effect, the challenge facing today’s F-35 pilots to shift from performing as an AWACs-like commander, to becoming a decision maker at the point of interest with the full motion video and overlays available to them, is a harbinger of a broader transformation of the C2 environment.

But this will not happen unless both aspects of change interactively occurs – namely, Generals lead but do not provide detailed intrusion; and distributed force commanders, operate on the SA which can be constructed with the tools available at the tactical edge.

And another challenge involves how the US has operated its intelligence processes.

In high tempo operations, it is not about collecting data, and culling it at some command post in the rear. It is about the intelligence function being embedded into a tactical edge rapid decision-making process.

Much of this information is fleeting, and it is a question of making better rather than worse decisions more rapidly; it is not about slowing down decision-making to the speed which hierarchical review requires.

Recently, I had a chance to talk with Bradford Powell, Vice President and General Manager of Cubic Corporation’s C2ISR Solutions business, about the nature of change in the C2 sector.

We discussed both the general dynamics of change as well as some solutions being worked by Cubic as well.

In this piece, I am focusing our discussion of the dynamics of change and in the next one I will address some specific Cubic solutions.

According to Powell, the clear trend line is to expand significantly access to imagery and to full motion video (FMV), while improving integration between the two.

While today, access to FMV within the military is targeted and to some extent limited, a decade out, full motion video will be ubiquitous.

He noted that his group at Cubic has primarily focused on handling the movement of video from Airborne ISR platforms.

For example, they have provided means for getting MQ-9 video from point A to  point B.

With the growing flood of video, the challenge will be not simply to manage it, but to turn the video stream into an effective decision-making tool at the tactical edge.

“We are working to provide context within the full motion video feeds, which will enable the operational user to make tactical decisions more effectively.”

He described C2 as moving from a focus on maps, to command and control operating from within full motion video.

And to do so will require tools that provide context easily used by the tactical decision maker.

As a relatively simple example he referred to the television networks placing yellow first down markers over the video of a football game.  If one then imagines the various data clusters which could be laid down over the full motion video available to the tactical decision maker, in his area of interest or the area where he is operating, then the coming future of video driven context for C2 at the tactical edge can be envisaged.

The task is to insert relevant tactical data into the full motion video.

“The full motion video focused C2 environment would then evolve to make a broader set of intelligence products discoverable in the video.”

The overall focus is to provide the local decision maker with much greater context for what he is looking at in the full motion video.

Obviously, as this capability is introduced, refined and developed, artificial intelligence can be shaped to provide effective tools to help shape the data coming into the contextual shaping function for the full motion video.

In short, “what is the impact of full motion video in terms of making faster decisions and communicating those decisions in a more effective way and enabling decision making at the lower level?”

In other words, the template for decision making is changing.

A shift to a distributed force will be effective only if a new template for decision making is put in place, one that allows for 21stcentury mission command and decision making at the tactical edge operating in high tempo operations.