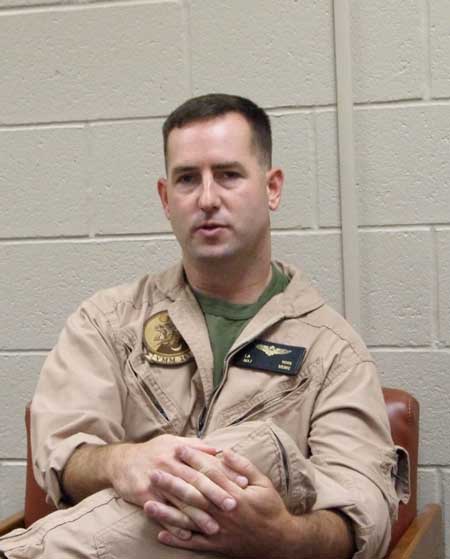 10/05 /2010 – In a wide-ranging interviews with Osprey pilots and maintainers at New River Air Station discussing their operational experience with the Osprey, one pilot highlighted with a single story the impact of the Osprey’s speed on operating in the battlespace.

SLD: Could you tell us about your background?

The first one was in 2002; we deployed on a 24th MEU and participated in OIF and then after that came home and then we went back out with 24th MEU again.

This time in Iraq 2004-2005, set up deployment there, and came home with 263 and stood the squadron down and then transitioned to the V-22 and then I deployed with VMM-263 as a first operational V-22 squadron to Iraq for seven months.

SLD: What was your operational experience in Iraq with regard to the ability to land the Osprey in spots similar to your helo? Because of your experience of flying rotorcraft in the first deployment and then Osprey’s in the second, your perspective would be definitive on this point.

Major Lee York: I have read all stories, all the naysayers, that the V-22 can’t replace the FROG. But my experience says the opposite.

And I’m talking the same exact place, you know, Ramadi and other cities, on landing zones that we’ve landed earlier with FROGs and now with V-22s. For the guys who said that they couldn’t do it, well, they’re wrong. SLD: You had an anecdote, which underscores the impact of speed in the battlespace?

Major Lee York: We took some soldiers out to the West of Iraq.

The crew chief comes up to us and tells us that the guys won’t get out of the plane.

We’re like, what are you talking about? They said we’re not there yet.

And we said, “What are you talking about?” He then said, “The last time we did this flight it took an hour and a half.

We’ve only been in the plane for 40 minutes so we can’t be there yet.”

“The last time we did this flight it took an hour and a half. We’ve only been in the plane for 40 minutes so we can’t be there yet.”

We told him to tell the Marines that “we were cruising at 230 rather than at 120 so we were there. I swear we’re here, you know, we’re not going to send him somewhere where he is not supposed to be.”