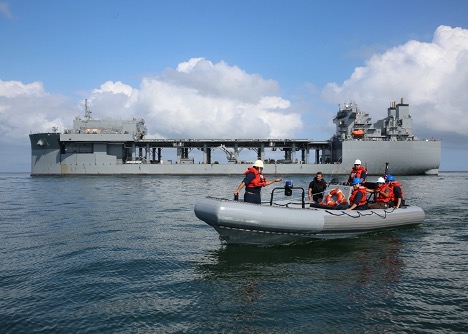 The Blue Crew departed Naval Station Norfolk today on the second-in-class ESB, which features a flight deck with four helicopter spots and a large reconfigurable mission deck for launching small craft, unmanned vehicles or other tools that embarked crews may bring with them.

The 100 sailors and 44 civilian mariners will conduct missions that include counter-piracy and partner-training operations – two of the key missions the Navy typically conducts in the AFRCOM area of operations – and special operations forces support, one of the two missions the ESB platform was originally built for.

“The ship, and our presence, is a continuation of a long-standing commitment and will operate in close coordination to deepen operational relations with our partners, our allies, agencies and our other services,” Woody Williams Blue Crew Commanding Officer Capt. David Gray told reporters today at the pier before the ship left Norfolk.

“We are going to participate in military-to-military operations and exercises to increase our interoperability to help maintain those enduring partnerships and relationships. This will help maintain security and stability that is crucial in these important regions.”

For the rest of the story, see the following: