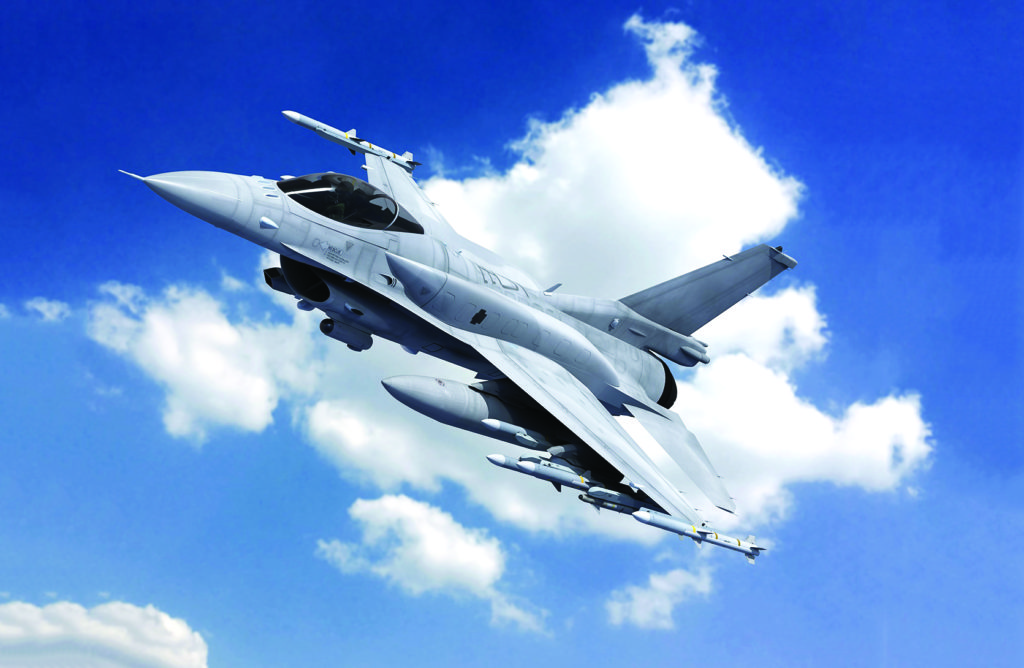 The F-16 Block 70 is about Combat Technology and Lockheed Martin’s offer to make it in India is about creating a strong defence industry here.

This is what the Government of India is asking, and this is what the company is responding to. The F-16 is the largest produced combat jet, in the US and some other countries, and its latest variant, the Block 70 is literally a new generation system.

Only the aerodynamic design of the aircraft has sustained itself as it is robust, and its performance easily meets IAF’s requirements. Every item in the Block 70 is otherwise new, a perfect example of evolution to near perfection, Dr Vivek Lall, a distinguished international aerospace expert, observed in an interview with India Strategic.

Lockheed Martin’s offer to create a defence industrial infrastructure in India is unmatched, and we will give India an ecosystem that should be the foundation of hi-tech aerospace developments, he told Gulshan Luthra. Excerpts:-

With the Letter of Request to the US for urgent acquisition of 24 MH-60R helicopters for the Indian Navy, and DAC approval, the deal for these helicopters should be on the anvil. Can you kindly comment on what stage it is there in the G2G and the company process. And, when will the Indian Navy have them for Training and Delivery for Operations?

As you noted, the MRH programme is a government-to-government Foreign Military Sale (FMS) programme. As such, any related questions are best addressed by the US Government.

Lockheed-Sikorsky should have identified offsets partners for the MH-60R programme as you had indicated earlier. Kindly elaborate on what will be made by whom in India?

It’s a bit too early to provide specifics about our offset approach but we are exploring a number of options. In the meantime, we are in discussions with Indian industry to determine which projects will best meet the Government of India’s offset objectives.

Your S-92 agreement with the Tatas is a fine example of cooperation and collaboration.

How is that going, how many of the structures have been delivered to Sikorsky and is there any extension of that programme?

Since production began in 2010, Tata Advanced Systems Ltd. in Hyderabad has delivered nearly 150 cabins to Sikorsky’s S-92 assembly plant in the United States.

Today, production of more than 5,000 precision components that comprise each S-92 cabin is 100 per cent indigenous to India supplied by our joint venture company, Tata Sikorsky Aerospace Ltd, which is also located in Hyderabad.

India has a huge helicopter vacuum, say an assortment of at least 1,000 machines. Even with multiple vendors, it is not easy to fulfill.

How is Lockheed positioning itself to fill India’s helicopter capability void?

Now that India’s procurement options have been opened up to include the MH-60R, we are looking for ways to leverage that active production line to expedite delivery to the Indian Navy.

The MH-60R provides a vital capability for the Indian Navy in the Indo-Pacific region. With over 450 anti-submarine warfare capable Seahawks flying around the world and millions of flight hours, the expertise Sikorsky/Lockheed Martin is able to offer is unmatched.

What’s your plan for the follow-up programme to make 123 naval multi-role helicopters in India?

The specifics of the NMRH programme are still being developed by the Government of India. Sikorsky is following this opportunity very closely but it is too early to comment on our approach until the requirements are better understood.

The F-16 Block 70 is more or less a new generation aircraft despite the structural aerodynamic design. It already shares some features with your F-35 aircraft, and with some additional features futuristic features perhaps, it could be an altogether new machine. Maybe you could have a successor in this process!?

The F-16 Block 70 on offer to India is a completely different animal. Block 70 mission systems are completely new and leverage technologies from the F-35. For example, the F-16 offer includes an operational, combat-proven Active Electronically Scanned Array (AESA) radar.

This provides a direct long-term benefit from sharing technology refresh capabilities and costs across multiple platforms well into the future.

Nonetheless, what is the progress in your F-16 campaign for India?

What is the expected size of the Indian requirement in money terms?

Lockheed Martin recently submitted a comprehensive, fully compliant 600-plus page Request for Information (RFI) response to the Indian Air Force. Only the F-16 has the proven performance and scale to meet India’s single-engine fighter aircraft needs and directly support Make in India.

US Government and Lockheed Martin have offered to shift the F-16 production line to India. That is a big incentive for the Indian defence industry, particularly as some 100 or 200 aircraft could also be exported from here in the coming years. Your comments please?

Indeed. F-16 exports could begin within five years of establishing an exclusive production line in India. Lockheed Martin has significant, unmatched experience in setting up such global production facilities and, based on our proven track record, we are confident that once given the go-ahead we will be able to rapidly implement a fully functioning F-16 production line in India.

An F-16 selection positions India to benefit from the significant surge in interest in the Block 70, which today includes opportunities totaling more than 200 aircraft in nearly a dozen countries, beyond India.

What is the sales potential for the F-16 globally?

How many orders are there currently for the F-16 deliveries, for LM to fulfill directly?

With the recent addition of Slovakia, we now have a total of 30 new production F-16s already in the pipeline.

When will the production come up for certification by the US DCMA?

Tata will then be able to submit bids for wing manufacturing beginning in late 2020 or early 2021.

In the run-up to the F-16 campaign, what efforts are being made to increase India’s footprint in the Lockheed supply chain?

The F-16 provides unmatched opportunities for Indian companies of all sizes, including Micro, Small & Medium Enterprises (MSMEs) and suppliers throughout India, to establish new business relationships with Lockheed Martin, Tata and other US and global industry leaders.

Lockheed Martin recently emphasised its commitment to India by announcing the company will partner with Tata to commence production of F-16 wings in India.

The landmark ‘Make in India’ announcement is a strategic initiative that positions TASL to become the provider of wings for all future customers. Building F-16 wings in India is a natural next step that builds on our successful partnerships with Tata on the C-130J airlifter and S-92 helicopter.

TASL is Lockheed’s biggest Industry partner in India. Which other companies are likely to emerge as industrial or offset partners?

Vivek Lall. We’ve had productive and positive discussions with a number of Indian companies and we are continuing to engage with Indian industry about potential F-16 opportunities.

The F-16 provides unmatched opportunities for Indian companies of all sizes, including Micro, Small & Medium Enterprises (MSMEs) and suppliers throughout India, to establish new business relationships with Lockheed Martin and other industry leaders in the US and around the globe.

There is bipartisan support in the US for increasing cooperation with India. How do you see India-US ties growing in Defence in the coming years irrespective of which party comes to power in either country?

Do you see the relationship moving beyond the transactional to a deeper partnership?

Indeed. The United States and India are natural partners with shared interests across myriad political, economic, and security issues.

We are very encouraged by the positive trend we’re seeing in US-India relations, particularly on the defence and security front.

Most recently, India and the US approved the Communications Compatibility and Security Agreement (COMCASA), a landmark military communications and security pact, during the historic US-India “2+2” dialogue in New Delhi.

The Indian military can now access the high-end, encrypted communication equipment used on US military platforms, including C-130J aircraft operated by the IAF.

The IAF operates a fleet of 11 C-130J-30 Super Hercules, which is the most proven and versatile airlifter in the world.

The C-130J represents a legacy of partnership between the IAF, Lockheed Martin and the US.

The signing of COMCASA further strengthens the growing India-US relationship and reflects India’s designation as a Major Defence Partner of the US.

IAF certainly seems to be interested in F-35, and perhaps the Indian Navy will also be if this beautiful aircraft is offered. Will You?

Any discussions regarding potential new F-35 customers begin at the government-to-government level. It is not our place to speak on behalf of the US Government or the Government of India.

That said, a US-India F-16 partnership would certainly indicate that both countries are prepared to collaborate on advanced defence technologies, including but not limited to fighter aircraft.

This article was published by our partner India Strategic in December 2018.

The Kingdom of Bahrain is the first customer to procure the F-16 Block 70, the newest and most advanced F-16 production configuration.

And according to an article published on the National Interest, the advantages of the new variant of the F-16 was highlighted.

Lockheed Martin has good reason to be optimistic about securing further F-16 sales. The Block 70 version of the venerable F-16 is a capable warplane by any measure and draws much of its technology from its more advanced F-35 stablemate.

But while the F-35 is a much more advanced and capable warplane than any version of the F-16, not every country needs a Joint Strike Fighter or is even cleared to receive the stealth fighter.

In those situations, the F-16 Block 70 might be the most capable fighter aircraft available to those U.S. allies.

At the core of the F-16 Block 70 is the Northrop Grumman APG-83 Active Electronically Scanned Array radar , which is based on technology leveraged from the F-22 Raptor and the F-35 and can track more than 20 targets simultaneously. The radar can also generate 1ft resolution synthetic aperture radar maps and has a range greater than 160 nautical miles against ground targets.

The jet also has a new state of the art electronic warfare system.

The Block 70 jet features a modernized cockpit with a new Center Pedestal Display (CPD) that provides tactical imagery on a high-resolution 6”x 8” screen. The new display will allow pilots to take full advantage of the Block 70’s new sensors.