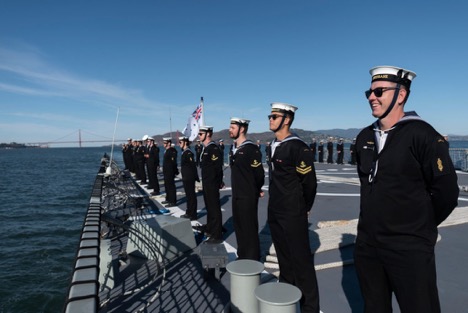 In a first for the Royal Australian Navy and the United States Navy, Guided Missile Destroyer HMAS Brisbane has completed a live missile engagement using guidance data from a US vessel using their Cooperative Engagement Capability (CEC).

Defence Minister Linda Reynolds said these trials which were held in waters  the US west coast over the past month marked a ground-breaking milestone for Australia.

“This missile firing demonstrates the very highest levels of interoperability between our navies,” she said. “It reaffirms the game changing technology that the Aegis combat system brings to our Navy and the advanced capability of the Australian-built Hobart Class Destroyers.

“By conducting these trials in the US, our Navy is able to access the world’s best expertise, instrumented ranges and analysis capabilities to provide confidence in how the ship will perform in combat.”

CEC is a significant capability delivered by the Aegis combat system. It allows similarly equipped vessels to cooperate in attacking targets, with one vessel providing targeting data and another firing its missile. In this case the remote sensor data came from USS Stockdale, an Aegis-equipped Arleigh Burke-class guided missile destroyer.

HMAS Brisbane (DDG 41) is the second of three Hobart-class guided missile destroyers to undertake  combat systems ship qualifications trials (CSSQT) on the US Navy range off the California coast.

That involves a full workout of the Aegis combat system and SPY-1D radar, with firing of live missiles against drone targets.

The last of the three Hobart class DDGs, NUSHIP Sydney, was launched in May last year, and is currently undergoing sea trials prior to being commissioned next May.

This was published by our partner ADBR on November 4, 2019.