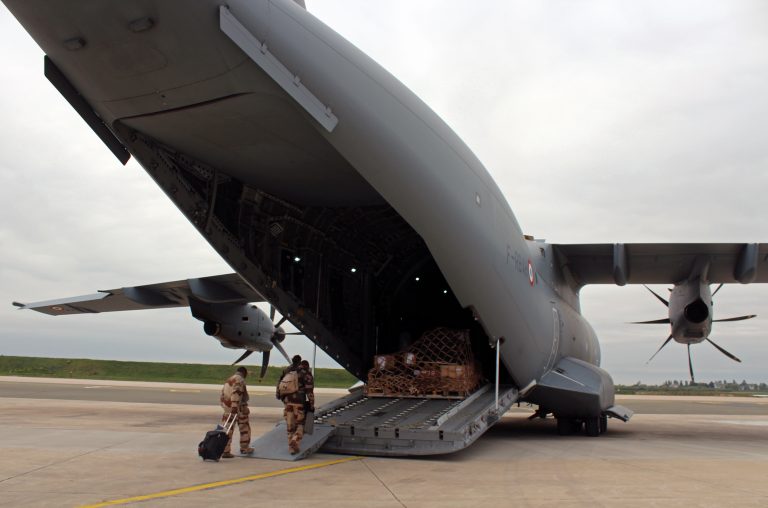 It is just a matter of fact, but not such a well-known one, that the A400M has been used for months as a regular weekly multi-stop shuttle on all the theaters where French armed forces are present.

“Ever since it has been available, the A400M has been used on all theaters of operation: it is a priority and what is important for us is that the aircraft fulfills the requested missions it has been assigned for,” saidCaptain Cyril, 61st Wing, Operations Cell.

His mission at the time of this interview was to fly about 40 passengers with their luggage, as well as various military equipment and spares, including a Mirage 2000 engine and a generator, through four destinations: Solenzara in Corsica, Jordan, the Emirates (Al Dhafra Air Base) and Djibouti.

Restructuring With Direct Flights In Mind

Because of the range of the A400M and its ability to carry both passengers and load, the coming of the new generation of transport aircraft has led to a major restructuring of the infrastructure of the mother base, i.e. Orléans-Bricy.

“We have aimed at concentrating all the necessary competences at French Air Base 123, which hosts a simulator organic to the Center of instruction of transport crews called CIET (“Centre d’instruction des équipages de transport”), where a crew can train up to the day preceding a mission,” explains Captain Cyril.

This A400M shuttle runs almost weekly to serve Chammal (i.e. the French component to Inherent Resolve), as well as Barkhane (i.e. the Sahel-Saharan theater where terrorists are being fought as well).

For the latter, airdrop capabilities are in the process of being certified to allow fret deliveries closer to the troops.

The same goes with night goggle and decoy capabilities.

But, as stressed by Captain Cyril, “a signed capability is not enough to implement it”.

Once certified, there is indeed a lot of documentary work to be done in order to make sure the right processes are being set in place to best use the new capability at the right time, so that a test pilot, an office designer or a young pilot can understand in exactly the same way.

From the viewpoint of the MSN31 crew, pilots and mechanics all together, the ongoing improvement of documentation in close cooperation with both the French Air Force (FAF) and Airbus Defence and Space is what has allowed for the ramp up of the A400M readiness over the last two years.

“We are currently able to fly four aircrafts, which may sound very little, but we have eight on base and three being maintained.

“Our overall readiness rate has reached 50% of the fleet, when it started at 15% and increased little by little as we integrated more aircrafts in the fleet”, notes the Captain.

Even if things are tight and if crews would not mind an extra two aircrafts to ease their mission management, such a trend in readiness is totally compatible with the Gaussian curve characteristic of any armament program’s early stage and end of life cycle.

A temporary solution has been founded to solve the engine issue, while Airbus is working on a definitive version better adapted to the power of the aircraft.

But the major change over the last twelve months according to pilots and maintainers alike has to do with management of any breakdowns, as experience and practice confirmed that many initial breakdowns, as detected by very sensitive sensors, were only temporary malfunctions in need for an update.

For maintainers such as Sergent P and G from Orléans support squadron ESTA (for “Escadron de soutien technique aéronautique”), it is necessary to learn “to talk with the plane”, to become an “aircraft whisperer.”

“Before, since we had so few planes, we could only react to breakdowns.

This morning, we had one, we did a test, lost five minutes and off we went…

That same alert only eighteen months ago would have grounded us while waiting for the maintainers’ diagnostic at the mother base.

This new level of performance in logistics management has allowed the A400M to have become a solid asset and a regular shuttle on which French forces.

And this also true for the other A400M European allied forces via the European Air Transport Command mechanism.

In short, these air forces can now rely on and build their operations with the A400M for any theater of engagement.

This article was first published on August 30, 2017