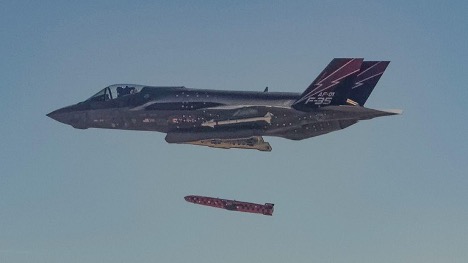 The KONGSBERG Naval Strike Missile and Joint Strike Missile (NSM /JSM) family of surface and air-launched anti-ship and land-attack cruise missiles is steadily growing its customer base, with Finland being the latest to nominate the air-launched JSM for its planned Lockheed Martin F-35A fighters.

The Finnish Air Force will be the third customer for the JSM after the Royal Norwegian Air Force (RNoAF) and Japan Air Self-Defense Force (JASDF), both of which will also employ it from the F-35A. This is in addition to four current and three planned operators of the surface-launched NSM, including the US Navy/Marine Corps, Royal Norwegian Navy, Royal Malaysian Navy, Canadian Navy, and the Polish Navy.

The NSM has a range in excess of 250km, whilst the JSM’s range is dependent on its flight and launch profile, and both are low-observable weapons capable of “high-subsonic” speed at low altitude.

The NSM and JSM feature similar internal systems, but have different airframes more suited to their respective launch and flight profiles. NSM can be launched from a compact cannister launcher on a ship deck or truck, and a development program is underway to integrate the NSM with the Sikorsky MH-60R helicopter. JSM can be carried both in the weapons bay and externally on the F-35A and F-35C models.

The 1000lb-class NSM and JSM both feature ship class identification through Autonomous Target Recognition (ATR), and both are highly-survivable through the use of passive sensors and selectable highly-agile flight profiles in the terminal phases of flight.

The US Navy has employed its NSMs in forecastle-mounted cannister launchers on its Independence class Littoral Combat Ships (LCS) forward-deployed to Singapore and the Indo-Pacific regions. The US Marine Corps has also conducted a number of trials with NSMs mounted on an uncrewed joint-light tactical vehicle (JLTV) chassis dubbed Navy Marine Expeditionary Ship Interdiction Systems (NMESIS), including participating in a ship sinking exercise (SINKEX) in August 2021.

The Polish Navy has deployed its NSMs with its Nadbrzeżny Missile Squadron (NDR) in a Baltic Sea coastal defence role from fixed and mobile cannisters. The system also includes mobile weapons control vehicles and command vehicles, mobile TRC-15C radars, and dedicated transport and loading trucks, and have been successfully integrated with Polish Jelcz 6×6 and 8×8 vehicles. Poland declared an initial operational capability of its NSM-based NDR-MW system in 2015.

Norway has also recently ordered more NSM for service from its Skjold class corvettes and Fridtjof Nansen class Aegis frigates, while Germany will replace the AGM-84 Harpoon with the NSM on its F124, F125, and F126 class frigates. Closer to home, Malaysia plans to integrate the NSM with a new class of corvettes/LCS based on Sweden’s radical Gowind class design it is building for service entry from 2023. And the Canadian Navy has selected NSM on its Type 26-based Canadian Surface Combatant in combination with longer-range Tomahawk cruise missiles.

A key Australian link to the NSM/JSM is BAE Systems Australia’s contract with KONGSBERG to provide the RF sensor for the air-launched JSM. A full-rate production order was awarded in October 2020, and is an extension of low-rate contract that has been in place since 2015.

SEA 1300 will likely look at a range of capabilities to cover a range over overlapping arcs out to more than 500km. The ADF has already been approved to acquire the Lockheed Martin AGM-158C long-range anti-ship missile (LRASM), and the RAAF will likely take the lead on this from its F/A-18F Super Hornets through Project AIR 3023 Phase 1.

Despite the concept being successfully demonstrated, the surface-launched version of the LRASM missile is yet to find a program-of-record in the US or an international launch customer, and thus is still some years away from service entry. In anticipation of a possible Australian LRASM-SL order, Lockheed Martin Australia and Thales Australia have teamed to offer the local manufacture of some elements of the system including its Mk114 booster in Australia as part of the Government’s sovereign precision weapons enterprise effort.

But the 400km-range LRASM-SL might be seen as overkill for smaller targets or for those that are closer in, and this is where the NSM comes into play. The smaller and lighter NSM can be precisely targeted to hit a specific part of a vessel, and thus can effect a mission-kill without the need to destroy the target. Multiple NSM can also be employed against a ship with a simultaneous time on target. NSM’s compact size potentially makes it suitable for use on all RAN ship types, perhaps as small as the RAN’s new Project SEA 1180 Arafura class OPVs, the first of which was launched in December.

Similarly, the air-launched LRASM may eventually be integrated on the F-35A for external carriage where it would be launched from stand-off ranges. But with the JSM being designed for internal carriage in the F-35A’s weapons bay – with sufficient space to also carry two AIM-120 AMRAAM missiles – this will allow the aircraft to maintain its very low signature in a contested maritime environment. To this end, the first air-launch of a JSM test round from an F-35Ainternal weapons bay was successfully completed by the JSF Joint Test Force (JTF) at Edwards AFB in California in February 2021.

Noting KONGSBERG’s Australian collaboration and production activities on JSM, and previously with the RAN’s Penguin anti-ship missiles which equipped its Seasprite helicopter, there could be potential opportunities for accelerated sovereign guided weapons enterprise activities on NSM/JSM, especially with any such activities not being subject to US Government ITAR approvals.

This article was written by Andrew McLaughlin and published by ADBR on January 7, 2022.