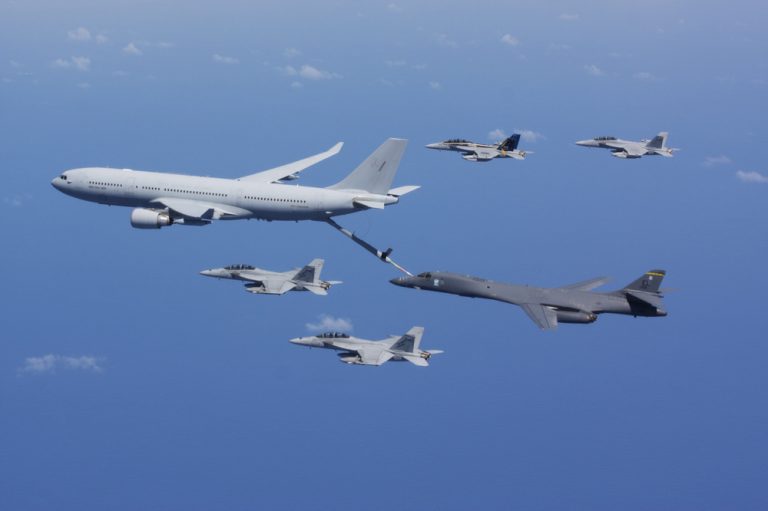 During a visit to Amberley Airbase, Murielle Delaporte and I had a chance to talk with Group Captain Steve Pesce, Officer Commanding 86 Wing, comprising the RAAF’s C-17, KC-30A, B300, CL604 and B737 fleets.

We discussed his perspectives on the future of air tanking, and specifically the next steps in the evolution of the KC-30A, including enhanced sustainability in combat operations.

The development of the Automatic Air-Air Refueling (A3R) boom to the KC-30A is viewed by the Group Captain as both part of the strategic evolution of tanking and as a significant upgrade to the KC-30A as an operational platform.

He has been involved with the KC-30A program for about 10 years, and has seen the aircraft move from design to reality and to become “the preferred tanker” in Middle Eastern operations.

He sees automation and robotics as part of the change involving the evolution of tanking itself.

From his perspective, in a conflict against a “near-peer” adversary the RAAF and allied forces may not have the luxury of secure tanking in uncontested airspace.

Air forces will gain transient advantage rather than total control of the air and will support surface assets that will be more dispersed across a larger Area of Operation (AO).

Demand for AAR (and air mobility in general) will increase as the survivability of a large tanker is reduced.

Distributed operations in contested airspace will become a norm, and that means in his view the end of the classic larger tanker operations.

The manned tanker will operate further away in the battlespace and become the mother ship for tanking remotes operating as refueling nodes to expendable assets deployed forward,

“My view of the future battlespace is that sensors and shooters will be more proliferated, integrated and reach further and with greater precision.

“There will be a natural move towards dispersion to improve survivability and delivery of fuel will be critical.

“The future of a large tanker will be to support more distributed and dispersed operations and we will be looking at small tactical refuelers providing fuel to tactical air combat assets – these tactical assets will likely be cheaper, unmanned and more expendable.

“That is where A3R comes in.

“I see an advantage in the automatic boom because it reduces the workload on the operator who in the future may be managing or controlling formations of UAV during AAR.

“As we learn to use this technology, it will be part of shaping the skill sets to transition to the next phase, of a large tanker replenishing smaller, automated tactical refuelers.”

Another aspect of change associated with KC-30A is part of the evolution within the battlespace as seen by Group Captain Pesce.

Namely, the proliferation of communications and sensor technology throughout the air combat force will include larger platforms such as C-17 and KC-30A, by including new SATCOM and other linkage technologies.

This is designed to support not only a dispersed force but also provide network redundancy in a disrupted and contested EM spectrum.

In the near term, the RAAF is working with Airbus Defence and Space and with other tanker allies to enhance the sustainability of the MRTT.

Such multi-platform proficiency was viewed as an essential capability to support a small force operating as a force package either within Australia in some future military contingency or in a force projection package away from Australian territory.

“Our maintainers are initially trained with regard to specific platforms but we will rotate them across multiple platforms as well. A technician might work on a KC-30A for six years and become a maintenance manager.

“Typically, one would then be promoted to say a Sargent and then those Sargents might then be posted to a different aircraft type, like F-18s.

“At the same time, we will have sergeants from F-18s posted to KC-30A and they will then need to be retrained on that platform.

“This approach comes at a cost. But the clear gain is that you have a broader pool of cross-trained workers.

“As a smaller air force, we need an agile and multi-trained maintenance force to enhance our effectiveness.”

For Group Captain Pesce, a key challenge is “to enhance the sustainability of the fleet. It is a very high demand asset and indeed we are using the tanker at twice the level we anticipated.

“This means we have to look at ways to extend the life of the operational fleet and to improve the sustainment approach.

“A challenge faced by all military platforms leveraging a large commercial fleet is that the configuration used by the military is simply a small subset of a much larger commercial fleet, whether 737s or A330s.

“And a common configuration enhances our ability to work with allies flying the same platform as well.”

“The key discussion we are having with Airbus focuses on configuration control for the fleet in order to reduce costs of sustainment for the users.

As the fleet of tankers gains more operational experience, more accuracy is achieved with predicative knowledge concerning the key military parts of the A330, which has been transformed into a tanker.

And getting better domain knowledge of predictive parts performance is a key part of ensuring the timely supply of parts to ensure that the dispatch rates of the fleet remain high, again because it is a high demand asset.

Improvements in logistical support are a key way ahead for the KC-30A in the RAAF.

As Group Captain Pesce concluded: “If you are a small air force, you want as small a logistics footprint as possible to ensure optimal combat effectiveness.”

Certification of KC-30A with Various Aircraft The B-1B Lancers participation in this exercise was part of the Enhanced Air Cooperation program, which aims to increase the interoperability between Australia and the United States.