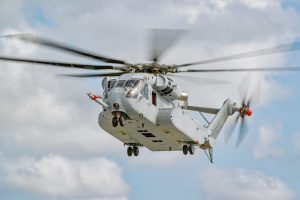 For 21st century digital military systems, the development process is both about how you build the evolving aircraft as well as testing the product and evolving the lessons learned into the evolving production process.

It is an open-ended learning process.

And one, which will characterize the flow of data and lessons, learned from the digital maintenance systems back into the build process and the supply chain.

In the early days of the CH-53K program, a 2011 press release by Sikorsky highlighted the new approach.

According to Dennis Jarvi, then vice president, Navy and Marine Corps Programs for Sikorsky, “As we commence assembly line operations at FAFO, we are witnessing the dawn of a new age in rotorcraft development and construction.

“The CH-53K helicopter is being digitally designed and manufactured. We have created ‘virtual tools’ that will improve the learning process and identify and solve issues before they become costly delays in manufacturing.

“The CH-53K helicopter stands to become a model of innovative technology and capability when it takes its role in the fleet.”

During my visit to the West Palm Beach Sikorsky facility on October 26, 2017, I had a chance to visit the final assembly line at the facility, a line that is moving to Connecticut when the full rate production commences.

I met with David Wilcox, the Senior Manager, Florida Assembly & Flight Operations, and toured the line.

Wilcox explained that unlike the Blackhawk, the K was built with the workers using a digital 3D CATIA model to define their work instructions.

“I think the greatest innovation of the manufacturing side that we have been using on the K-line versus say the Blackhawk is the shift from using two dimensional flat blueprints and work instructions to using a 3 D CATIA model for defining the work instructions.

“We use a system called Right Hemisphere which provides the 3D Catia projection.

“The installer has a tablet, and he selects his install and out comes a 3D model of his install.”

“And it shows him his components and it shows a component being applied to the aircraft or to the mating component.

“And the image is 360 degress, so the worker can turn the projection however he wants to see it.

“And it’s all at the employee’s fingertips.”

Such a system provides better accuracy and better repeatability than using the classic blueprint approach.

“There is a great learning advantage as well from the 3D visualization of the work order instructions.

“For example, when you’re doing the 3D modeling through the CATIA programming, you’re seeing the interface issues before you do the physical install.

“My experiences with the older approach using blueprints are that you only find those kind of issues as you’re building the product.

“But when using the Right Hemisphere system and CATIA, you should see it before you attempt to build it. You should see the interface issues prior to that, through the modeling.”

We then discussed the build process on the final assembly line and what the FAL process had already received as it began its final build process.

Sikorsky receives from Spirit the airframe for the aircraft, in other words, the skin and skeleton of the aircraft.

On the final assembly line they turn it into a K as an operational aircraft.

“We install all of the operational components and build an aircraft that is ready to go into the flight program and then put on the main rotor blades and the fuel and fly the aircraft.

“Everything else is done here on the FAL.”

Sikorsky is following a four station build process and as they build aircraft they are designing the process to have accurate projections of the build time in each station.

That is also part of the development process.

“When we get into production, we’ll have a much better idea of what the level loading and the flow should be. Part of the development of the aircraft is indeed building the production line to produce operational aircraft.”

The K is a very big helicopter.

The question then naturally is raised about what special problems building such a larger rotorcraft poses?

Wilcox indicated that there are pluses and minuses to building a large rotorcraft.

On the plus side, is that the space ergonomically is easier for a number of the build functions for the installers.

Simply, put there is more room in which to work.

“You need much greater additional space given the footprint of the airframe itself.

“How do you get 2 ½ stories up to put the tail blades on, for example?

“We have had to build some ergonomically challenging tools as well for production which is part of the development process as well.

“Through development process, you are determining if this is right tool?

“Do we need to modify it somewhat in order to be able to utilize the full use of it?

“And how do we make it ergonomically friendly to the workers building the aircraft?”

There is also the question of the work stands and moving them in the build process.

“As we build the Blackhawk, we can manually move work stands and even the aircraft if you need to.

“We have had to develop air bearings, which allow us to put air into the stands and to the fixtures, and they’ll then just scoot across the floor.

“We need to use air bearings and air compression, rather than try to manually moving the work stands.”

One theme which we have developed on Second Line of Defense is how the nature of 21st century military aviation programs is different from legacy ones.

A key aspect of the shift from legacy to 21st century military combat systems is the digital nature of the production and maintenance process as well as the role of software upgradeability providing tools for further modernization.

It is crucial to understand this shift in under to fully understand the nature of the generational break within these systems.

The shift from the E to the K is not simply a shift in the last letter. It is a shift in generations for the production process as well.

Development is not about shaping a prototype; testing the prototype and then building the next prototype and so on until initial operating capability and then off you go with the first production aircraft.

Development is a cycle in which build aircraft are tested, software modified and the digital process and learning process flowing directly into the build process.

With an IOC declaration, the service has an operational aircraft, which the manufacturer knows how to build and replicate, but also to be able to fold into the digital learning process lessons learned from the filed operations and maintenance of the aircraft.

There is a lot of modernization already built into the aircraft as it first deploys, rather than being a costly add in requiring significant hardware and software surgey at a later date.

In short, the shift from the CH-53E to the CH-53K it is a shift in generations in how the aircraft is produced, maintained, operated and sustained.

This article was first published on February 8, 2018.