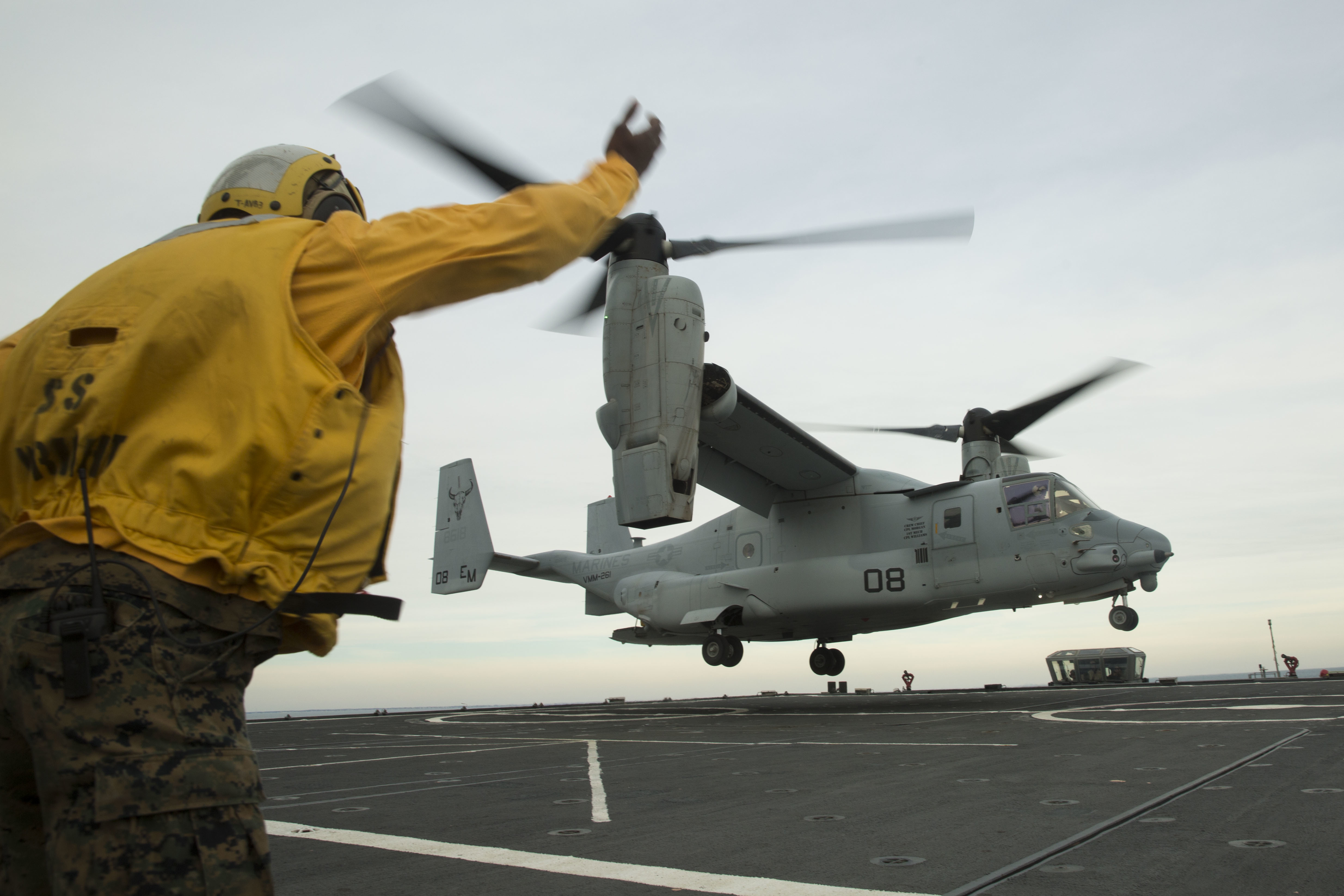 Over the years, the Marines have worked to expand the decks on which they can land to support ship to shore operations.

In part, their success led the US Navy to select the Osprey as a key element to transport support from the large deck carriers.

Over the years, we have covered this expansion of landing sites at sea for the Marines, starting with Bold Alligator 2012.

Recently, Marine Medium Tiltrotor Squadron 261 incorporated an MV-22 in conjunction with a T-AVB for the first timewhile conducting ship to shore exercises.

In an article we published April 2, 2012, we looked at the first landing of an Osprey on a T-AKE ship.

Second Line of Defense visited the USNS Robert E. Peary (T-AKE 5) while it was in port in Norfolk. The ship caught our eye while we were covering Bold Alligator 2012 because of the first operational engagement of an Osprey aboard a T-AKE ship.  We will publish shortly an interview with the Osprey squadron commander involved in Bold Alligator 2012 where he will comment on how the T-AKE ship supports the ARG-MEU and ESG-MEB configuration.

Captain Little is a graduate of the Merchant Marine Academy and has operated off of virtually every asset Military Sealift Command operates, since he joined in 1989.  He was the first chief mate for the T-AKE 5 when it was delivered to the Navy in 2008.

He and his crew had just returned from a 9 ½ month tour, which included action off of Libya as well as participation in the Bold Alligator 2012 exercise.  Notably, the helos, which operate off of his ship during deployments, are either USN helos, or Eurocopter Pumas. And the ship is extremely flexible in providing supplies of various kinds, including ammunition and fuel. During the Libyan operation, the USNS Robert E. Peary worked with several allies as well.

The men and women of the Military Sealift Command are true mariners. They operate at sea off and on during the year with only three months off. They are civil servants but are closely intertwined in support of the warfighter.

CIVMARs are credentialed, in their areas of expertise, by the U.S. Coast Guard and are rotationally assigned to MSC ships for stints of, at a minimum, four months. With no shore duty breaks during their civil service careers and with, generally, thirty days separating each ship assignment, CIVMARs are consummate mariners, journeymen in their fields.

SLD: Captain, could you talk a little bit about the Osprey landing on the T-AKE ship?

Captain Little: The Osprey landing was a long range supply demonstration.  It took off from New River, landed on our ship, got refueled and then participated in a raid on Fort Pickett more than 180 miles inland. The Osprey was on deck for about 30 minutes, loaded four pallets, was able to refuel, and took off with her cargo to support the Marines ashore in Fort Pickett.

SLD: And you had sent some of your crew down to New River to prepare for the exercise?

SLD: I talked with the Osprey squadron commander and he was pleasantly surprised to find that you could re-fuel his plane.

Captain Little: We are used as a refueler in fleet operations.  We have limits when it comes to re-fueling ships, but can refuel helicopters all day if we had to.

SLD: Another aspect of the exercise was the Pumas which landed aboard your ship as part of the replenishment effort.  Could you comment on this development?

Captain Little:  We accommodate normally either Navy helicopters or the Pumas which are used by MSC contractors who do replenishment at sea.  In this case, the Pumas came from North Carolina to support the exercise. It turned out to be a tremendous asset because we were able to pick up a Marine Corps Colonel on sequel Sunday.  He came and toured the ship because it was his folks that were riding onboard, and then we were also able to pick up my Admiral Buzby, who came aboard for two nights, and witnessed Bold Alligator, and so it’s a win-win.

SLD: How are the Pumas used normally?

Captain Little: Sometimes the Pumas get passed from ship-to-ship, so they might stay in Persian Gulf, and then I go relieve Lewis and Clark, and load the Pumas onto my ship.  They just move aboard. The operators of the helos are six on, six weeks on, six off, but the asset stays with the MSC ship, but I did bring the Pumas back with me this last deployment.

SLD: It is clear from the tour you provided and the discussions we had during that tour that this class of ships is a very flexible asset. You pointed out during the tour that it is even ice hardened to enable it to operate worldwide.

Captain Little:  Yes, she is a very flexible ship, and she’s got 13 sisters that are just as flexible, and are a great addition to the MSC Fleet of Auxiliary Ships. Aboard this ship we carry ammunition, dry and frozen stores for the Navy.  We can secure a small token amount of fuel.  We can sustain the warship for as long as necessary.  We can go give them a cargo, and then go back into port.  We can get fresh fruits and vegetables, or whatever is needed or the spare parts they might require, and we do that on a regular basis.

We can go from a big deck to small deck.  We can do a stern refueling to a mine sweeper or a patrol craft.  We can take care of them with helos to provide for support when ship to ship transfer can only be done this way.

SLD: MSC really is the floating infrastructure for the USN-USMC team’s global presence?

Captain Little: We are.  Volume may increase depending on the needs of the Navy, but where the Navy is deployed, we’re already there. We’re always ready; we are already doing the job, and putting capabilities in place.

SLD: Another capability, which we discussed while touring the boat, is the ship’s ability to take on board a core security team.

Captain Little: When I go into what the Navy deems dangerous or high risk area, I’ll embark a military Embarked Security Team.  The decision by the military security team to use force against hostile or potentially hostile forces rests with the members of the security team in accordance with their Rules of Engagement.  There is berthing for 60 but normally we would take a 10-12 man team.

SLD: When we were touring the bridge, we discussed the modern controls which you have on the ship.  And you commented that there was a good side to that – more easily accessible information – and a bad side for the younger generation who might not have had the experience of the mechanical not I-Pad age.

Captain Little:  The younger generation of Merchant Marine Officers need to learn that what is under that icon on the screen or clicked with a mouse is really a mechanical part or system.  And they better know how that system works.

I can look at my screen, I have a wealth of information at my fingertips from my desk on what the ship’s doing, but there’s no substitute for me walking on the bridge, and taking a look.