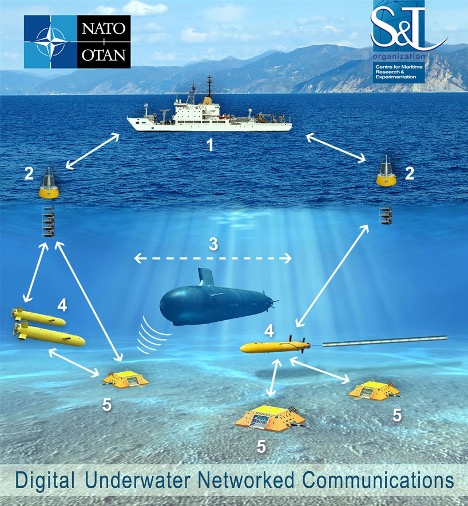 CATANIA, Sicily – The future of anti-submarine warfare for countries who can’t afford to invest in top-of-the-line submarines and maritime patrol aircraft could be a netted fleet of unmanned platforms that can create “passive acoustic barriers” at chokepoints or drag towed arrays through a country’s territorial waters.

NATO’s Centre for Maritime Research and Experimentation is showcasing these ideas at NATO exercises such as the ongoing Dynamic Manta annual ASW exercise, showing off novel operations that could one day be commonplace if navies and their industrial bases decide to invest.

CMRE Director Catherine Warner said the organization has been working with autonomous vehicles in the undersea warfare area for the past 20 years to understand how they can contribute to perhaps the most complex type of naval warfare.

“The big idea in this whole realm of unmanned systems is figuring out the right systems with the right sensors and the right scenario that’s going to be cost and operationally effective,” she told USNI News after the kickoff of Dynamic Manta.

She said ASW is “high-end asset-intensive” and that, while unmanned vessels can’t do everything a manned sub or plane can, they can perform some specific missions that would be cost-prohibitive to do with manned vehicles.

For the rest of this article, see the following: