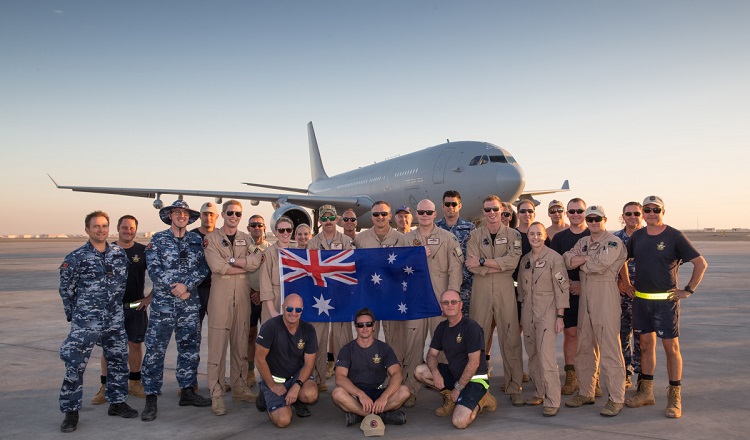 Since September 2014, the RAAF had maintained a single KC-30A from Amberley-based 33SQN in the Persian Gulf region to support an RAAF Air Task Group and coalition aircraft on combat operations up into Iraq and Syria.

Initially part of a larger ATG contingent comprising RAAF F/A-18F Super Hornets and F/A-18A classic Hornets, and an E-7A Wedgetail AEW&C aircraft, the fighters were withdrawn at the start of 2018 leaving the KC-30A and E-7A in place, and are rotated back to Australia every few months for maintenance.

“The KC-30A has been a significant force multiplier for the Air Force and has proven itself over Iraq as part of Operation OKRA,” new Chief of Joint Operations AIRMSHL Mel Hupfeld said in a statement. “Just one KC-30A can support the deployment of four fighter aircraft over 5,000km and has the versatility to refuel a range of different aircraft types.

“With the professionalism and operational effects we bring to the global coalition, the Australian KC-30A contribution is very well regarded amongst the coalition partners,” AIRMSHL Hupfeld added.

Some of those different types include French Dassault Rafales, UK Eurofighter Typhoons, USAF F-16s, and US Navy and USMC F/A-18s and AV-8B Harriers, as well as large transports and other tankers.

Allowing for smaller offloads and smaller aircraft types, it’s fair to assume the RAAF KC-30As deployed to Operation Okra have conducted well over 10,000 successful air-to-air refuellings in the four years or approximately 1,440 days of their deployment, a remarkable achievement.

This article was first published by our partner Australian Defence Business Review on August 13, 2018 and is republished with their permission.