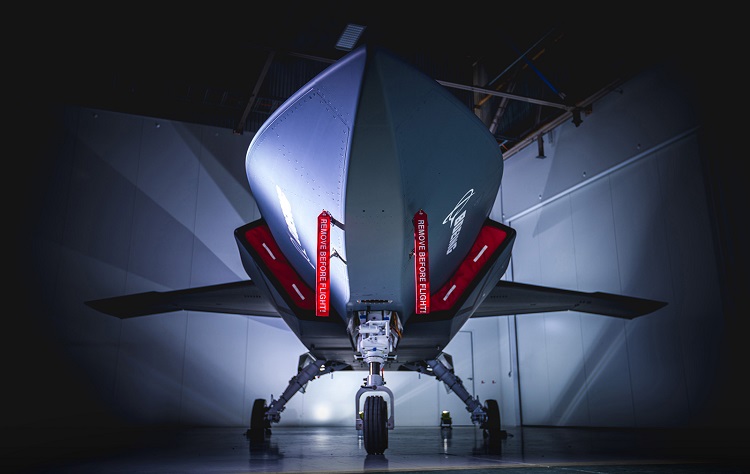 The first of three Loyal Wingman unmanned combat aircraft for the RAAF has been rolled out by Boeing Australia and its industry partners.

The aircraft, which at 37 feet long with a 24 feet wingspan is the size of a small fighter, can fly at high subsonic speeds with various payloads and has been designed and manufactured in Australia. The RAAF had ordered three systems so far under Air Force Minor Program DEF 6014 Phase 1, with a view to developing the concept of operating with a high-performance unmanned combat system.

Designed and developed by Boeing Australia in conjunction with BAE Systems Australia, RUAG Australia, and more than 30 other industry suppliers, the Loyal Wingman has more than 70 per cent Australian content, and is part of Boeing’s Airpower teaming Systems concept which it hopes to develop for multiple international customers.

“This project is an excellent example of innovation through collaboration and what can be achieved working together with defence industry,” RAAF Chief of Air Force, AIRMSHL Mel Hupfeld said in a statement. “This demonstrates the importance of the relationship Air Force has with Boeing Australia and defence industry more broadly. I look forward to exploring the capabilities this aircraft may bring to our existing fleet in the future.”

Boeing’s ATS program director Shane Arnott told media that the Loyal Wingman will have a reconfigurable “snap on-snap off” nose section and open systems architecture which will enable different sensor payloads to be rapidly added to suit mission profiles. “The nose is 2.5 metres in length and more then 1.5 cubic metres in volume, so it’s a lot of space to fit different payloads and sensors into,” he said. “The whole idea of this is to give flexibility to the customer and achieve multi-role capability at a fraction of the cost of what is typically possible.”

While Arnott wouldn’t be drawn on what these payloads might be, it is likely these will include air-to-surface or air-to-air radar, electro-optical/infrared (EO/IR), or electronic intelligence (ELINT) sensors, or active electronic warfare payloads. RAAF Head of Air Force Capability, AVM Cath Roberts also offered that the Loyal Wingman would assume air combat roles, and thus would be capable of employing air-to-surface or air-to-air weapons.

When asked whether a successful Loyal Wingman development and concept demonstration program might lead to the system being part of the third tranche of Project AIR 6000, AVM Roberts said it was more likely that Loyal Wingman will help to inform which way that project may go. This may result in the acquisition of the last 28 F-35As of Australia’s stated program of record for 100 jets, the retention and upgrade of the RAAF’s 24 F/A-18Fs to conduct manned-unmanned teaming operations, the formation of an operational Loyal Wingman unit, or a combination of all three.

“We are proud to take this significant step forward with the Royal Australian Air Force and show the potential for smart unmanned teaming to serve as a force multiplier,” Boeing Defense, Space & Security vice president and general manager of Autonomous Systems, Kristin Robertson said in a statement. “We look forward to getting the aircraft into flight testing and proving out the unmanned teaming concept. We see global allies with those same mission needs, which is why this program is so important to advancing the development of the Boeing Airpower Teaming System.”

In a separate statement BAE Systems Australia Chief Executive Officer Gabby Costigan said, “I am delighted to be working with Boeing Australia to bring a new defence capability to life that also offers enormous potential for the RAAF as well as future export markets. This project highlights our commitment to leading the development of new technologies and collaborating to advance autonomous capabilities. It is also an exciting opportunity to work together again, delivering a world-leading program using home-grown engineering expertise.”

The Loyal Wingman has been developed through extensive computer modelling and actual sub-scale autonomous aircraft flights to develop the concepts of flying in company with manned aircraft, autonomous swarming, and the levels of artificial intelligence required.

The first full-scale aircraft will undergo systems testing before conducing ground and taxi tests, with the goal of conducting its first flight at an undisclosed location by the end of 2020.