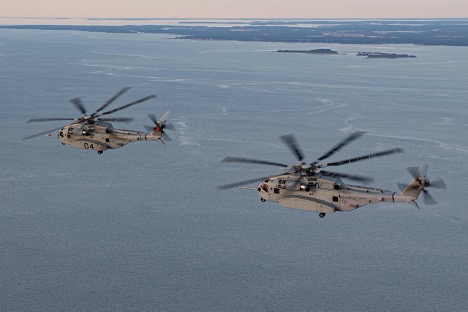 CAPITOL HILL – Marine Corps leaders are looking forward to ramping up CH-53K heavy-lift helicopter production after military and industry leaders agree the program’s technical challenges are behind them.

During last year’s budget season hearings on the Hill, the focus of conversation around the 53K was a list of 126 deficiencies that had been identified, including the most talked-about issue of exhaust gas reingestion (EGR), where the helo’s three engines were sucking in hot and dirty air instead of fresh air.

This week, during the annual House Armed Services Committee hearing to discuss aviation programs and budget requests, Deputy Commandant of the Marine Corps for Aviation Lt. Gen. Steven Rudder was focused on how quickly the Marine Corps and Sikorsky team could ramp up production to bring costs down.

He noted that the Marines only asked for seven aircraft in the Fiscal Year 2021 request because when the budget was being written the EGR issue hadn’t been solved yet; as of December, a solution was proved and agreed to, and Rudder says he’s ready to buy more aircraft in the out years – 11 a year is the current rate on paper, but he said the Marines want to go even higher.

“The higher the numbers, the greater the learning curve from production,” Rudder told the HASC tactical air and land forces subcommittee.