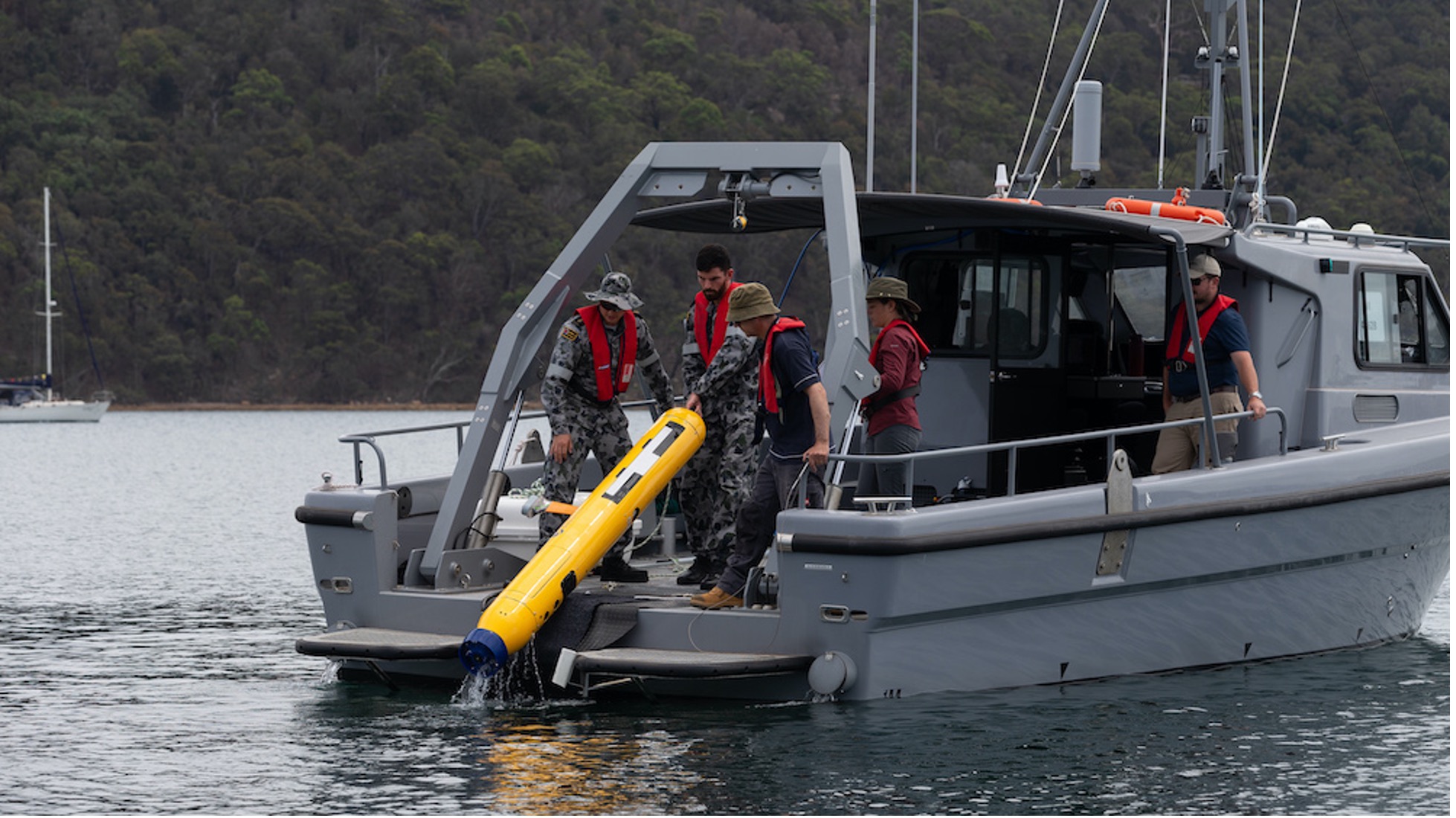 Back in 1957, Britain’s Defence White Paper saw a future in which the supremacy of guided missile systems meant the era of the manned fighter aircraft was effectively over. That turned out to be somewhat premature – as we well know, human-piloted combat aircraft are still around.

Some analysts are saying much the same about crewed submarines, that emerging sensors will make the sea “transparent,” eliminating the fundamental submarine stealth advantage, and that uncrewed surface and underwater hunter-killer systems will be so effective that traditional submarines won’t stand a chance in the conflict of the future.

Uncrewed aerial system (UAS) perform many useful functions, including surveillance and strike. Air combat of the future will feature crewed aircraft such as F-35 and Super Hornet operating in conjunction with UAS such as Boeing’s Loyal Wingman.

The war under the sea will likely be much the same, with a growing role for Unmanned (uncrewed) Underwater Vehicles (UUVs).

The Royal Australian Navy already operates UUVs performing underwater survey and mine clearance. Collins class submarines – now destined for many more years of service – will likely soon go to sea with an onboard UUV in a Loyal Wingman-type role, as will their nuclear-powered successors.

The roles of UUVs will likely soon expand – from surveying, sensing for surface and submarine threats and, if need be, serving as a decoy, to ultimately go to war in their own right, fighting autonomously against adversary crewed and uncrewed platforms.

With Australia now embarking on the long journey to acquire nuclear subs, a number of commentators have suggested we should also acquire a large UUV such as the Boeing Orca (title pic), now in trials with the US Navy.

Orca is a development of the Echo Voyager, a fully autonomous 15.5 metre 45 tonne UUV, able to dive to depths of 3,000 metres and cover 6,500 nautical miles. Power is diesel-electric with lithium-ion batteries.

With no requirement to accommodate humans, uncrewed submarines can be simple and compact. The US Navy has big ideas for Orcas which could perform surveillance and intelligence gathering, mine countermeasures, anti-surface warfare, anti-submarine warfare, electronic warfare, and strike missions.

“The RAN, working in early, close partnership with the US Navy and US and Australian industrial partners to develop and field the Orca, and make a range of different payloads for it, is the path that is likely to bring the most undersea combat power most quickly to Australia’s military,” wrote Australian Strategic Policy Institute (ASPI) senior analyst Michael Shoebridge in March.

That was before the government announced Australia would acquire nuclear submarines (see article on page 26), when it seemed the new conventionally-powered Attack class boats were unlikely to enter service before the mid-2030s. But the new nuclear subs are likely to be even further away. Meanwhile Australia’s submarine capabilities will be delivered by upgraded but increasingly ageing Collins boats.

Shoebridge said it was unfortunately obvious that even the most sophisticated crewed submarine would need to work with a range of sensors and other systems including UUVs if it was to operate safely and effectively against adversary systems like China was already fielding. “That’s probably true right now in a place like the South China Sea, and it’ll only get more manifestly obvious between now and 2035,” he said.

Unsurprisingly, China says little about its own UUV capabilities, manifested through occasional display of vessels on the back of trucks during various military parades, or through Indonesian fishermen netting glider-like surveillance UUVs as far south as the Java Sea.

China is developing a range of UUVs for different applications. The largest seems to be the Haishen 6000, a 3.5-tonne eight-metre prototype reportedly capable of diving to 6,000 metres.

How good are Chinese UUVs? We just don’t know. It does appear that China’s most mature capabilities are in marine surveying and reconnaissance, but growing competencies in artificial intelligence (AI) would appear to have significant implications for its future UUV capabilities. That’s because any UUV, unless tethered to a mother vessel, is effectively on its own.

That’s fine for conducting defined brief missions such as mine clearance, but for extended operations as will be performed by Orca, the vessel needs to make its own decisions without regular input from an operator.

UUVs face the same communication constraints as regular submarines. Radio works fine on the surface but only transmissions at Very Low and Extremely Low Frequencies (VLF/ELF) can reach subs at operational depths. And those transmissions are one way – the sub can’t respond until it surfaces – are slow, have low bandwidth, and require vast onshore infrastructure, such as the Harold E. Holt Naval Communications Station in Western Australia.

It may not be particularly visible or widely known, but the Royal Australian Navy has a strong interest in UUV technology, and has maintained a close watch on developments and already fields a number of systems.

It says some technology is available now, able to conduct simple well-defined missions, with human oversight. But by 2030, technologies will be maturing, able to perform missions independently, automatically adapting to changing situations. And by 2040, systems will feature advanced understanding of scenes from their sensors, an ability to perform ideas-based reasoning, and able to navigate in dense and dynamic environments.

With a vast area of interest and limited platforms and personnel, the Navy is looking to autonomous systems to generate mass and tempo on a scale it otherwise could not achieve.

The Navy first used remotely operated systems more than three decades ago with a surface system to tow targets. Minehunters – the old Bay class and the Huon class – both used tethered UUVs to hunt sea mines. Next generation mine-hunting systems – which are on the way through Project SEA 1905 – will use more sophisticated UUVs to ensure humans and valuable vessels go nowhere near minefields.

For deployable mine countermeasures, the RAN currently operates the 70kg General Dynamics Bluefin 9 and the 213kg Bluefin 12, while actual mine disposal is performed by the Sonartech Atlas Seafox, an expendable UUV which destroys itself and the mine. For rapid environmental assessment of a harbour or landing beach, the Navy will use a pair of 37kg REMUS 100 UUVs.

Submarines of the future – ours, those of allies, and adversaries – will be equipped with onboard UUVs, now an emerging capability.

Long before they retire, Australia’s Collins boats will go to sea with embarked UUVs, possibly the in-service Bluefin 12 or its larger sibling, the Bluefin 21, a 750kg long-endurance UUV able to reach depths of 4,500 metres.

Launching such UUVs is not a problem – Bluefin 21 is 21 inches in diameter, the same as a standard torpedo tube. Smaller UUVs can swim right out, although the US Navy is investigating sabot systems. But recovery is more problematic, as UUVs can’t easily swim back down the torpedo tube, though that may come.

Various underwater recovery systems have been proposed, among them using divers to manually retrieve the UUV or a remotely operated deck-mounted capture arm. Under the US Navy’s Snakehead program, the dry deck shelter which is used for deploying SEALs and their swimmer vehicles, will be modified for launch and recovery of large UUVs.

Australia has good understanding of allied capabilities thanks to the Autonomous Warrior exercise series which Navy describes as its flagship program to demonstrate, evaluate, and trial emerging systems at various technical readiness levels.

Autonomous Warrior 2018, which followed Unmanned Warrior 2016 in Scotland, was held in Jervis Bay and involved realistic trials of 77 air, surface, and underwater platforms and systems from various nations and Australian and overseas companies.

The most recent AW activity was a virtual conference held in June and hosted by Warfare Innovation Navy..

This article was published by ADBR on February 1, 2022 and was written by Max Blenkin.