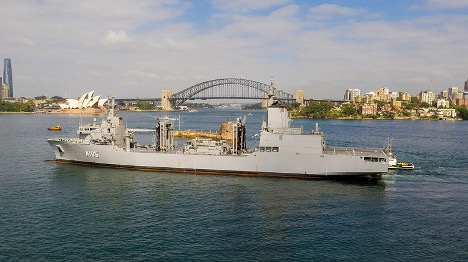 The first of two Supply class vessels – largely based on Spain’s Cantabria class – sailed into Sydney harbour on the morning of January 15 after arriving in Australia in October 2020 and completing final a fit out at Fremantle. The arrival follows the announcement that the vessel has been formally accepted by the RAN.

“The arrival of Supply into Sydney Harbour today marks the beginning of a new capability for the Royal Australian Navy, one that will extend the endurance and operational range of Australia’s entire naval fleet,” Defence Minister Senator Linda Reynolds said in a statement.

“This is the second ship of the Royal Australian Navy to carry the name Supply. The first HMAS Supply has a long list of achievements and honours, including providing disaster relief in North Australia following Cyclone Tracy in 1970.” (Ed note – Cyclone Tracy occurred in 1974.)

In a company release, Navantia Australia’s Managing Director Alfonso García-Valdés said, “We are extremely proud of the contribution all of those involved with the AOR program. We look forward to the next step in her progress, with the commissioning of NUSHIP Supply by the Royal Australian Navy.

“Of course, our important work is not yet done,” he added. “Navantia Australia remains focussed on delivering industry leading asset management, smart sustainment solutions and engineering services for not only the Supply class AORs, but all Navantia designed ships and craft.” These include the two Canberra class LHDs and their LHD landing craft (LLC), and the RAN’s three Hobart class destroyers.

NUSHIP Supply replaces HMAS Success as the RAN’s east coast AOR, and is expected to be commissioned into service at the end of the first quarter of 2021. Supply’s sister ship, NUSHIP Stalwart II will replace HMAS Sirius as the RAN’s west coast AOR. It is scheduled to arrive in Australia in mid-2021 and be accepted into service by the end of the year.

This article was written by Andrew McLaughlin and published by ADBR on January 15, 2021.