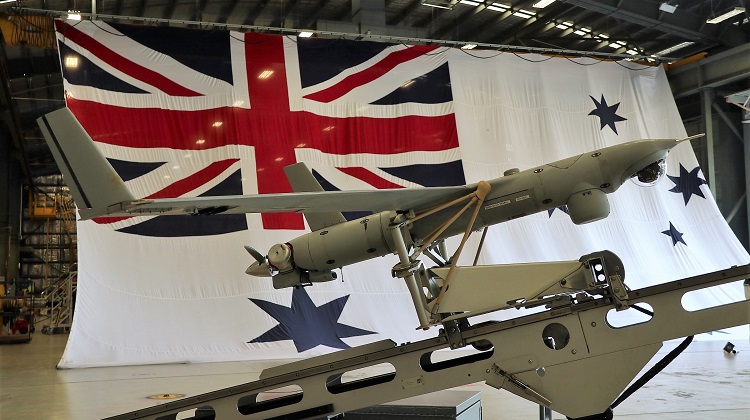 A major step in a new era of naval aviation took place at HMAS Albatross near Nowra on October 25, with a ceremony to mark the commissioning of the Royal Australian Navy’s 822X Squadron.

The ceremony represented the transition of unmanned aviation from the RAN Naval Unmanned Aircraft Systems Unit (NUASU) to an operational squadron of the Fleet Air Arm.

Nearby, a huge naval ensign hung within a hangar, while appropriately, the parade was held to a backdrop that showcased the RAN’s long association with unmanned aerial systems in the form of a Jindivik and a Kalkara. Both wore high visibility orange paint schemes, which was a testament to their role as target drones, while in contrast, the modern aircraft of 822X Squadron carry inconspicuous, low-visibility grey schemes.

The fixed-wing Insitu ScanEagle and rotary-wing Schiebel Camcopter S-100 are also far smaller than their predecessors, and possess a far greater endurance in their role as tactical maritime unmanned aerial systems. As reflected in the squadron’s motto of ‘See the Enemy’, the UAS’s core role will be that of Intelligence, Surveillance and Reconnaissance (ISR), providing the fleet with high-quality video and still imagery in near real-time to significantly improve battlespace awareness. 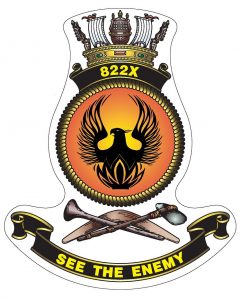 Under the command of CMDR Mick Rainey, the squadron’s mission is, “To conduct experimentation and evaluation activities with contemporary UAS and advanced payloads to develop operational knowledge and experience, develop orders and procedures supporting safe UAS operations and to assess UAS capability options that support integrated warfare outcomes for the future Fleet.”

The commissioning service drew together the history and traditions of the RAN while also recognising that the squadron represents a very modern aspect of operations. 822 is a new number, not a revived squadron number as has often been the case in the past. While the ‘8’ in the squadron number indicates its operational status, the ‘22’ stemmed from the number of the unit’s first aircraft. (ScanEagle AV1422 bore the call sign ‘ScanEagle 22’.) Additionally, it is the first squadron to bear the ‘X’ suffix.

Paying due recognition to its heritage, squadron’s sponsor Gwyneth Hall is the daughter of LTCDR Henry ‘Nobby’ Hall. LTCDR Hall’s naval career began in 1938 and over spanned World War 2, service on numerous RAN ships, and saw him witness the Japanese surrender in Tokyo Bay. He transferred to the fledgling Air Branch in 1948 and his service ultimately covered 43 years of naval history, retiring in 1981.

Chief of Navy, VADM Mike Noonan addressed the gathered audience under blue skies, while the Commander Australian Fleet, RADM Jonathon Mead, read on behalf of the Governor General of Australia. With a four-ship helicopter flypast, the traditional ship’s company cheer and the commissioning of the squadron’s pennant, 822X Squadron was now commissioned.

This article was first published by our partner Australian Defence Business Review on October 26, 2018.