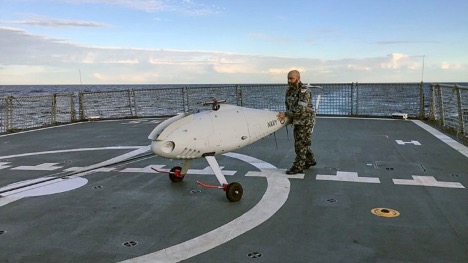 The air vehicle, GCS and a cadre from the RAN’s 822X SQN and Aircraft Maintenance and Flight Trials Unit (AMAFTU) embarked on Ballarat for a series of trials to test the S-100’s ability to be launched and recovered from the frigate’s flight deck at sea. The trials are part of the RAN’s Navy Minor program (NMP)1942 program to inform its SEA 129 Phase 5 Block 1 and Block 2 maritime UAS requirement.

“The deployment of unmanned systems at sea will become a more common theme in modern maritime warfare, especially with the advent and continued development of artificial intelligence and robotic or autonomous systems,” Trial Director, LTCDR Chris Broadbent said in an article in Navy Daily.

“Maximising their ability to safely operate in a variety of environmental conditions is fundamental to their operational utility and making them a force multiplier.”

The S-100 is a shortlisted contender for the Australian Army’s LAND 129 Phase 3 tactical UAS requirement (page 16), and is expected to be offered for SEA 129 Phase 5 Block 1.