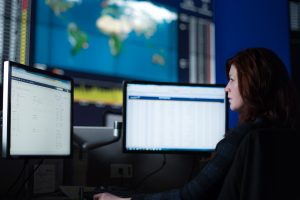 The S-92® helicopter was first delivered in 2004, and now, there are nearly 300 deployed worldwide by various commercial customers.

What makes the S-92 notably of interest for students of military systems is that the S-92 is the first helicopter deployed with digital systems for monitoring in real time the operational performance and health of the aircraft and thereby generating data where fleet performance can be measured and evaluated.

As new digital military aircraft systems come into operations, can the military benefit as has the commercial customer from leveraging data to enhance aircraft performance and availability?

According to one source:

A Health Usage Monitoring System (HUMS) records the status of critical systems and components on helicopters so that the early detection of progressive defects, or indications of them, is possible and thus rectification can be achieved before they have an immediate effect on operational safety.

The on-board equipment stores data on a PCMCIA Card.

For analysis, the card is downloaded after flight and maintenance analysis can then be performed on a ground-based computer.

These systems were first deployed in the early 1990s as a response to the relatively poor continuing airworthiness record and their introduction led to, and continues to support, significant improvements in both safety and reliability.

A typical HUMS system uses sensors, distributed throughout the airframe and its components, which are linked to a central computer unit with a data recording and storage system.

Monitoring trends in the recorded data is particularly important – it allows system specialists to determine whether the aircraft has developed (or is likely to develop) faults that require rectification.

A basic system collects some usage parameters such as take-offs, landings, engine starts and winch lifts as well as a small subset of engine and transmission health data.

The most modern systems monitor the health of all significant vibrating and spinning parts – engines, gearboxes, shafts, fans, rotor systems – and other components.

The operational context of events is recorded so that the trends can be fully analysed and maintenance crews are thus able to proactively perform condition-based maintenance.

The latest equipment allows the data acquired to be processed onboard the aircraft or at a ground station – and some systems allow it to be transmitted, whilst the helicopter is in flight, via satellite communications to operator maintenance control units so that subsequent maintenance downtime can be minimised by pre-planning.

These systems can also be configured to automatically report urgent or emergency conditions to the operator and manufacturer from anywhere in the world.

By visiting the Sikorsky Customer Service Center it is possible to see the state-of-the-art support to a customer fleet and then to explore how such capabilities can be more fully applied for the military customer.

According to Sikorsky, the Center is described as follows:

Sikorsky’s Customer Care Center is the heartbeat of Sikorsky’s customer support, and the foundation of Sikorsky’s continued movement to being more of a proactive and predictive service provider, working collaboratively with customers to improve the availability of their helicopters.

Based in Trumbull, Connecticut, the Customer Care Center is manned 24-hours-a-day by a focused, interdisciplinary team of experts working urgent customer needs as well as longer term availability and reliability improvements. 24/7 customer service is available at 1-800-WINGED-S (1-800-946-4337) for domestic inquiries and +1-203-386-3029 for international customers.

Through the Health and Usage Monitoring System, we apply individual aircraft data fleet-wide to reduce costs while improving reliability and aircraft availability – all to keep your helicopters flying smarter and longer.

The Customer Care Center is designed to improve aircraft availability and customer satisfaction using the latest intelligence and analytics capabilities.

The center is focused on both tactical and strategic response, with two distinct rooms:

Visiting the center is quite impressive.

As the description above notes, there are two centers, the fleet management center and the AOG resolution center, and each is manned 24/7 and set up with digital displays to provide real time data on the global fleet operations, regularly schedule maintenance and unscheduled maintenance demands.

One center focuses on providing for the parts and service flow.

The other analyzes the fleet performance over all and looks for learning paths to solve problems before they occur and to in general reduce down time for the global fleet.

According to Simon Gharibian, Director of Fleet Management, Supportability and Training, the centers support about 1,000 aircraft worldwide.

“Most of our customers fly high-op-tempo operations in either VIP, SAR, EMS, or offshore oil missions.”

“This is why the focus is clearly upon aircraft availability for the commercial customer.”

Both the S-92 and the S-76 fleets are supported by Sikorsky’s Customer Care Center.

The flow of data from the current operational fleet into the system is the foundation for shaping an effective system,

Performance will only really be enhanced when an organizational learning system is in place to direct the process and to support the customers providing continuous feedback.

The results from establishing such an organization are dramatic.

For example, in 2017, aircraft availability for the global fleet was around 95% and the numbers of incidents requiring resolution were down dramatically as well.

A key element of successful fleet management is clearly having forward stocking facilities and Sikorsky has four to support their global fleet worldwide.

The forward stocking facilities are crucial to manage the flow of parts to aircraft which need them, and one organizational task continuously being worked is determining what to forward deploy and what to not in order to optimize aircraft availability.

With several military programs already under its belt, including the legendary Blackhawk, and now the new Air Force rescue helicopter, the Canadian Cyclone and the Marine Corps CH-53K, how might these programs gain from the commercial support experience?

A large part of the answer is changing the organization approach to using data and better configuring maintenance and support organizations to just to collect data but learn from the data.

And that combat sustainment learning curve is about enhancing the availability of aircraft, and perhaps shaping the PBLs going forward to focus on that jointly desired outcome might well be the key target.

And as the fleets become global, clearly forward positioning of parts and supplies is crucial to an ability to support global operations.

How best to manage parts flows abroad with parts at home?

James Cycon highlighted the importance of the regional centers and the role of the centers in supporting regional needs.

“One of the powerful things about the regional support locations is that the material needed to support operations in that particular region varies and we can tailor parts to the regional operating conditions.”

This is especially important for the military because of the shortage of lifters and tankers place a premium on ability to forward deploy by normal commercial shipping methods.

Reducing the burden on the lift and tanking fleet via sound global support strategies is a force generator, not simply about good business practices.

In short, the commercial innovations demonstrated by Sikorsky in support of its flagship commercial systems provides a way ahead as the military comes to terms with its new digital aircraft and also will intersect with changes associated with the major combat air transformation associated with the F-35 and its global enterprise.

The digital systems in modern aircraft provide for the possibility of continuous improvement.

The challenge for the military is to align their organizations with the potential to tap into the aircraft systems THEY ARE ALREADY BUYING.

Jim Cycon had this comment with regard to the S-92 experience:

“When we first flew the aircraft it had a certain level of capability.

“Because we have had continuous access to the data generated by the aircraft and have empower a continuous improvement process, we are at an order of magnitude much greater with regard to the performance of that aircraft today.

“We have learned from real operational aircraft.

“With 250 aircraft flying we are now in a position to define what is normal.

“It is a collaborative agreement between the OEM and the government that is required with regard to similar digital aircraft for the military.”

There are clearly security limits built into military systems limiting the ability to provide flexible support of the sort Sikorsky provides its commercial aircraft.

But the key question is simply what security limits are actually required and which are simply hangover from the legacy period of supporting combat aircraft?

With regard to the CH-53K, the digital nature of the aircraft allows for spiral development.

But if the legacy requirements process prevails, then spiral development is aborted, even though it is built into the aircraft.

It is about changing the way you sustain and modernize the aircraft, as well as allowing for new business rules with regard to upgradeability to flourish and allow for the more rapid insertion of capability which software upgradeability allows for.

This article was first published on February 12, 2018.