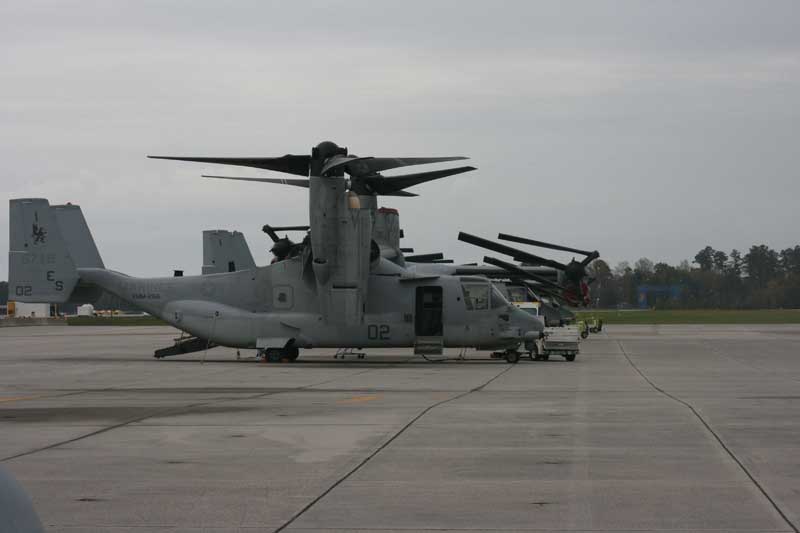 This is the fifth in this series of insights into the brith of the Osprey Nation.

Crafting the Osprey Enterprise: The Role of the Maintenance Team

The Osprey is a new plane, a new capability, and provides a new contribution to the MAGTF and to the joint forces.

As such, being a new platform and a new capability, the Osprey has challenged USMC thinking about concepts of operations; and its impact on joint operations has not really been understood.

As a senior member of the Obama Pentagon commented when asked “have you thought about the impact of tiltorotor technology on con-ops,” he responded simply no.

Yet the Osprey is one of the truly innovative capabilities being introduced in the USMC and the joint forces.

Not surprisingly, being new requires new approaches to supporting the aircraft as well.

It does not perform like a rotorcraft, so it will not be maintained with approaches inherited from USCM experience with rotorcraft.

In effect, the aircraft with on board sensors, and data flows available to both the pilot and the ground crew calls for a whole new approach to maintenance.

In effect, an Osprey enterprise is being forged in which the pilots, maintenance crews and the contractor support teams are working together to shape effective approaches to support the aircraft.

The maintainers are not the last members of the team, but integral players in shaping the evolving approach to sustainment of the aircraft.

This perspective was indeed clearly conveyed in a recent sldinfo.com exclusive interview with members of the Osprey maintenance team for the Osprey squadron VM-266 currently stationed in New River air station in North Carolina .

Learning on the field: ” More like dealing with the F-18″

In the conversation with the maintenance crew, the fundamental differences with maintaining the CH-46 were underscored. “This is a whole new bird,” commented one member of the team.

The “oldest” member of the team had five years experience with the Osprey, and the team underscored that the core effort to maintain the aircraft was being done by younger Marines for whom “the Osprey is their first aircraft.”

This means that the teachers of maintenance for the Osprey has experience going back only a few years; whereas “the CH-46 was being maintained by Marines being taught by instructors with 10-20 years of experience and 3-4 deployments under their belt,” commented one Marine.

Fresh approaches were required to deal with what in many ways is a revolutionary aircraft.

Training on computers and in dealing with data generated by sensors on the aircraft is central to the technical skills required.

“The CH-46 unlike the Osprey is not a sensor rich aircraft and does not generate maintenance data required for the support of the aircraft.”

The differences with traditional rotorcraft were highlighted throughout.

Some of the members interviewed had had experience with the first deployment to Iraq of the Osprey.

“We were well trained but did not know fully what to expect. We had learned how to maintain the aircraft in the US, but in the field it is a whole different experience.”

And the team member added: “We learned a great deal while on deployment.”

In fact, one Osprey observer has underscored that “ we catalogued what normally would be 5-6 years of experience into 18 months.”

This observation was echoed throughout the interview.

Working in close connection with the contractor: developping a crucial dialogue between engineers, pilots and maintainers
A major emphasis of several of the team members was the evolving nature of the enterprise.

“We are working closely with the contractor in shaping new approaches to managing maintenance events.

We send the maintenance events to the contractor through an IT system, and the contractor’s engineers work through solutions which are then translated into new approaches and new maintenance standards,” noted one Marine.

Another added, “We started with a small book of maintenance standards which has grown into a large book as we are identifying the standards which we will follow in maintaining the aircraft.”

The Marines underscored that the contractor deploys with them in Afghanistan, and this working relationship was central to the dialogue between engineers, pilots and maintainers seen as crucial to shaping the Osprey enterprise.

“We see progress all the time,” noted one Marine. “As Marines get to know the aircraft, they see how it saves lives and extends the battlespace. We win converts to the aircraft as Marines see it perform.

We view our task as part of an overall team effort to ensure that this battlefield advantage be available to our fellow Marines.”

A core capability driving the entire maintenance effort is that the avionics drive the system.

As one Marine commented: “the system provides us with the data with regard to what are the problems which need to be fixed.

The challenge is to finding the underlying cause to which the data indicates the problem.

As we gain improved understanding of the aircraft, we are getting better at finding the causes, and then shaping more effective maintenance standards.”

Down to a single “brick”

In its simplest terms, the maintenance approach can be broken into three key elements.

The first element is the role of the sensors, the mission systems and the data storage system aboard the aircraft. The sensors generate the data which is analyzed onboard the aircraft in flight and stored real time in a “brick” which contains a PC card.

According to Sgt. Mireles, “There are many sensors on the aircraft. A lot of these sensors are analog sensors which send data through data convertors to the mission computers.. where the data can be pulled up for the pilot’s use and to see where the fix can be made.”

The second element is the processing of the data on the ground. The maintenance crew uses a COTS laptop to run the software, which is updated, on a regular basis with the contractor, and the PC card is put into the computer to run the maintenance evaluations and tests.

And the exchange of data with the engineers is a central aspect of determining the evolution of maintenance standards and shaping “maintenance events.”

According to Sgt. Gilbertson, “All the data is collected in the maintenance brick for the maintenance download. Inside the brick is a card where your data is stored. From here, it can be used on the (laptop) computer. From there, the aircraft summary of what the aircraft did… (can be analyzed).”

The third key element is the dialogue between the air and ground crews.

Because both teams have access to the same data, they can shape common understanding of the problems and shape paths to resolving the problems.

In other words, the maintenance team is really at the heart of the evolving Osprey enterprise.

And the new capabilities to be maintained can lead to mission success as well.

As one Marine commented: “When a CH-46 has a problem a red light comes on. You have to land it and take care of the problem. If you are doing this in Taliban country, the guy who is coming out may not have a wrench.

“With the V-22, not only will you know what is the problem, but you have a clear idea how long you can continue to fly with the problem.”

In other words, new capabilities provide new ways to operate, and new ways to stay alive in combat situations.

The featured photo was shot by Second Line of Defense and showed the basic complement of Ospreys at New River in the Fall of 2009.