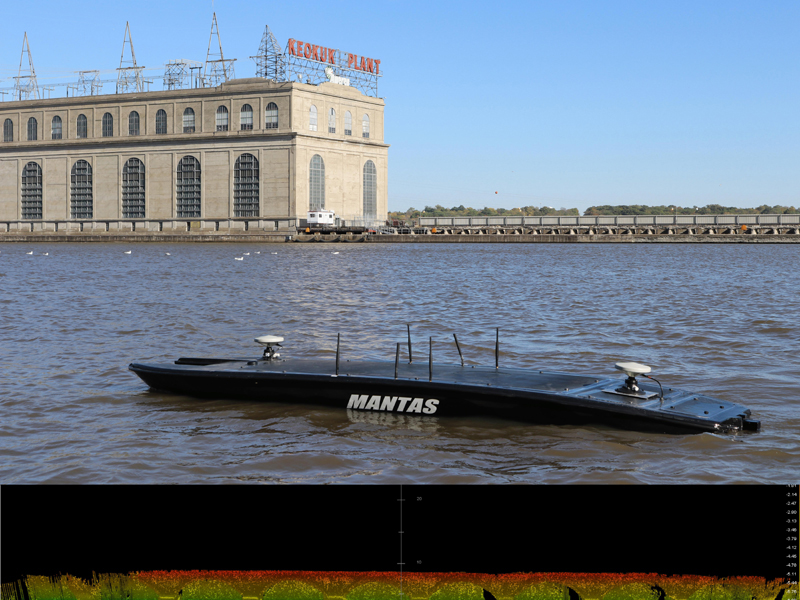 Special Forces are changing as is the focus for those forces.

As the primary focus shifts from the land wars, there are two core implications for the SOF.

First, they may well be the initial land intervention force but a wider land force engagement.

They are not the force delivering the effect; they are setting the table for the arrival of a much larger force.

Second, they will evolve as the tip of the spear in conflicts and crisis management situations involving peer competitors.

With a return to force-on-force peer conflict, crisis management becomes both different and even more significant.

The military strikes were the visible side of the effort; the back channel discussions with the allies and the Russians were the less visible one.

Paul Bracken has provided some PhD brain power on the subject and he highlighted a key aspect of what we are calling the strategic shift to crisis management for 21stcentury peer-to-peer conflicts.

The United States Special Operations Command hosts SOFIC – the Special Operations Forces Industry Conference – provides a window on thinking in this key community and the evolution of the technology to support its evolving concepts of operations.

This year’s event – held at the Tampa, Florida Convention Center May 21-24 – drew well over 10,000 visitors who came to hear senior leaders from the SOF community share their most compelling needs with industry and others who can help man, train and equip America’s forces who are taking the fight to the enemy.

SOFIC is the premier conference for the SOF community to interact with industry and to collaborate on the challenges, initiatives and way-ahead in delivering the most cutting-edge capabilities into the hands of SOF operators. While other military-industry conferences are important, it’s easy to vote this one number one.

In the opening remarks by General Raymond Thomas III, the Commander of USSOCOM and by Mr. James Smith, Acquisition Executive, USSOCOM, the changing context and demand signal on Special Forces was highlighted.

The briefing highlighted the need for SOF to operate globally in contested environments with evolving technological capabilities and an ability to leverage innovations being shaped by the evolution of regular forces. Capabilities such as assured communications, assured maneuver, precision navigation and timing, precision munitions, counter IED/UAS capabilities, expeditionary ISR, managed signature, enhanced military information support operations, expeditionary logistics and capability to be interoperable with partners were highlighted.

And the presentation by Ms. Lisa Sanders, Director, Science and Technology at USSOCOM focused upon the changing strategic environment within which SOF is and will be operating,

The challenge of operating in a contested environment headed the list of the challenges facing the SOF and was highlighted as a key technology focus area. 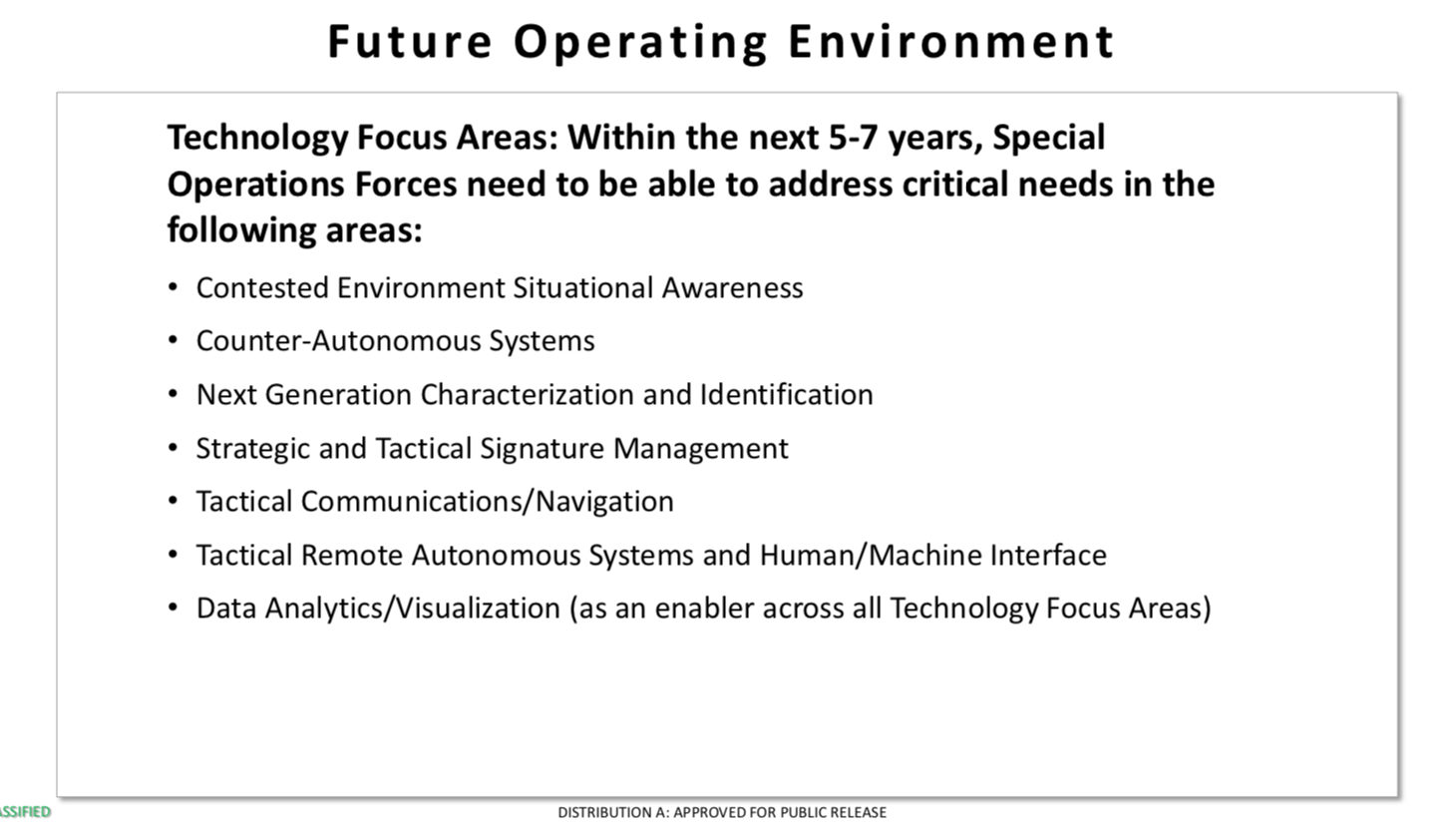 One of the things that attracts attendees to SOFIC is the hands-on nature of the event – it includes vastly more than the typical “static” contractor exhibits.

At this year’s SOFIC, SOF operators of all ranks had the opportunity to test drive innovative, cutting-edge technologies that could directly support SOF operators who are in the field and in the fight today.

But across the board the challenge of recrafting concepts of operations for the crisis management environment while continuing to hone skills appropriate to various aspects of land-based counter terrorism is a significant one.

The video below produced by Naval Recognition provides a sense of how this worked with regard to insights concerning maritime technologies and special forces:

An example of evolving maritime technologies for the SOF community was MANTAS family of Tactical Autonomous Unmanned Surface Vessels.

Bruce Hanson, CEO of MARTAC (Maritime Tactical Systems Inc.) based in Satellite Beach, Florida, said this why his company brought their MANTAS USV to SOFIC: “MARTAC’s objective is to deliver reliable and innovative unmanned systems to protect the United States and its allies,” he said.

“SOFIC is an important event for MARTAC because we recognize that our SOF operators are the ones taking the fight to America’s enemies today. Equipping them with our MANTAS USVs that enable them to gain critical intelligence regarding the littoral battlespace motivates all the members of our team.”

The MANTAS USV was one of several systems demonstrated at SOFIC and is illustrative of the hands-on nature of the event.

Why is hands-on important?

It’s because today’s special operators are in the fight today and aren’t especially interested in long-range development projects that will deliver technology in the “out-years.”

A hands-on demonstration enabled SOF reps from all services to test-drive a 12-foot MANTAS USV system-of-systems and explore its ability to provide a real-time surface picture. In this case, operators drove the MANTAS USV equipped with a SeaFLIR230 EO/IR Gyrostabilized High Resolution Camera.

The system was operated in the bay fronted by the convention center, and it sent real-time visual imagery to the FLIR booth. There, operators made in-stream command and control decisions regarding where to redeploy the MANTAS USV for additional or zoom-enhanced imagery.

In another demonstration, MARTAC showed the ability of a MANTAS USV equipped with a Teledyne Reson T20 High Resolution Multi-Beam Echosounder (a compact sonar) to map the harbor floor, pier structures and channel boundaries within the area of the Tampa Bay Convention Center.

The MANTAS USV sent these images in to Teledyne booth for real-time viewing using multiple devices, including a laptop, a tablet, and a smart phone.

In another demonstration of even newer technology, MARTAC demonstrated an eight-foot MANTAS USV hybrid/stealth prototype capable of operating at neutral buoyancy to demonstrate the ability of the craft to operate in a semi-submersible mode with the upper deck at water level and only the antennas protruding thru the water.

SOF operators noted that the USV was virtually impossible to see as it made its way throughout Tampa Bay.

The value of these hands-on demonstrations is difficult to overstate.

And the maritime area was simply one key area with the land and air domains being highlighted as well. Indeed, special operations are being shaped by the evolving multi-mission approach to warfare and the special operations community has for some time pioneered ways to leverage data and support from air, ground, sea or space.

Clearly, Special Forces both US and allied have played a key role in the counter-insurgency wars of the past 15 years. In many ways these forces have driven significant military innovation.

The challenge will be the decade ahead within which crisis management and direct peer-to-peer conflict becomes a primary focus of attention.

Undoubtedly, future SOFICs will provide inputs, insights and leadership to shaping a way ahead for the evolution of the Special Forces in the new context.

This article was first published on Defense.info on August, 2, 2108.