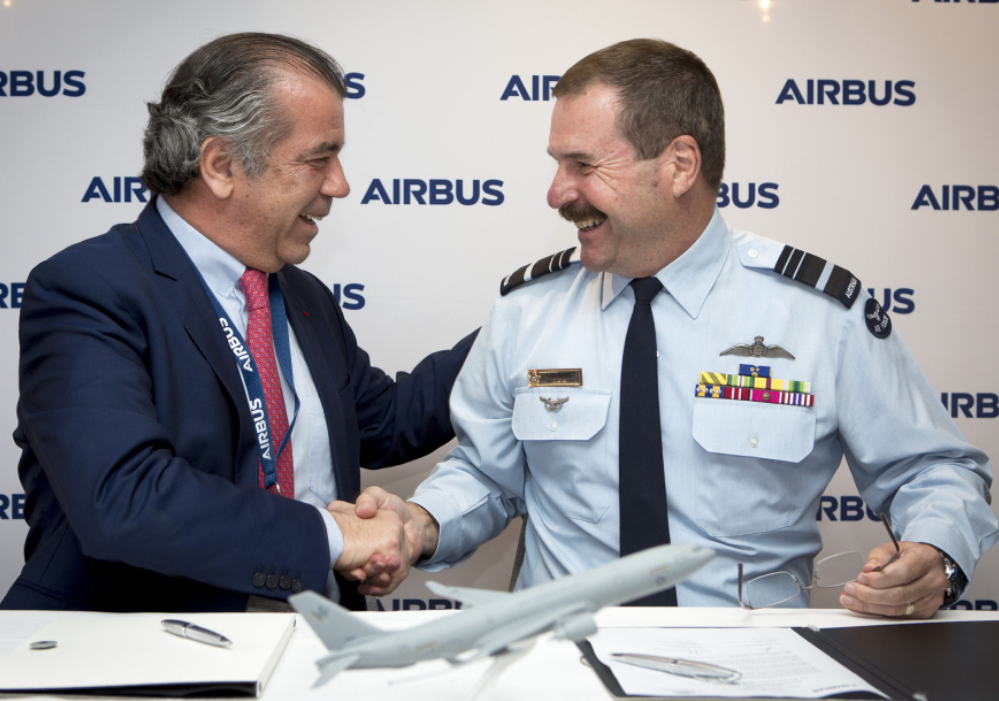 During my visit to Australia in March 2017, I had a chance to discuss the way ahead for the KC-30A with the two senior operators involved with the program and its evolving capability.

We met at Amberley Airbase where the KC-30As and C-17s are based. Air Commodore Richard Lennon is the head of the Air Mobility Group and with Group Captain Adam Williams, the officer commanding 86th Wing as well as the CO of the 33rd Squadron (KC-30A).

Last year, I published an interview with the head of the tanker program at Airbus.

And in that piece underscored that having digested the operational fundamentals with the tanker, the tanker program was now moving on to the next phase, which I have called Tanker 2.0.

The baseline tanker is fully functional; now what other capabilities can be added to it as it moves beyond being a gas station in the sky?

Also, since I was last here, the Ministry of Defence has signed a new partnership to shape the way ahead for Tanker 2.0.

This agreement was announced at this year’s Avalon Airshow.

In an article published on March 18, 2017, we highlighted the new partnership agreement.

The Aussies have also signed an agreement with Airbus Defence and Space to partner in shaping what one might call Tanker 2.0, or the smart tanker.

The tanker is a mature military product operated globally and now Australia is laying the foundation for the next transition, to shape new innovations through automation and linkages to shape the smart tanker.

According to a press release by Airbus Defence and Space:

The agreement strengthens the industrial partnership between Airbus and Australia’s defence force, and will help to define the evolution of the KC-30A fleet as it reaches operational maturity and expand its capabilities.

This will result in the KC-30A’s core transport and refuelling capabilities supporting the RAAF’s transformation into a fully integrated force, capable of tackling complex contemporary defence and security challenges.

The agreement’s first milestone is the joint development of the automatic air-to-air refuelling (A3R) concept, which represents a major step forward in in-flight refuelling.

Automating boom refuelling contacts reduces potential risk by minimising operator workload, and increases operational efficiency by cutting the time for each contact. The system requires no additional equipment in the receiver aircraft.

Initial approach and tracking of the receiver is performed manually from the A330 MRTT’s console. Once the image processing system acquires the receiver and the receptacle position, the operator can use the system aid allowing the boom to automatically follow the receptacle. Final extension of the boom’s telescopic beam is manually performed by its operator to make and maintain contact.

Fernando Alonso, Head of Military Aircraft at Airbus Defence and Space said: “The KC-30A offers tremendous combat potential at the heart of the integrated Air Force of the Future, including using the platform as a Communication Node, to maximise air power delivery.”

“We are delighted to contribute to the research and development of A3R with Airbus to automate the process for boom refuelling without the need for control by our on-board air refuelling operator”, said Air Marshal Davies.

The Royal Australian Air Force and Airbus have successfully performed proximity trials, with physical contacts planned for the near future.

The interview started with Group Captain Williams providing an update since our last meeting at Amberley in August 2016.

“We have been performing very well with our KC-30As globally.

“In the Middle East, using only one tanker on rotation, we just passed our 75th million pound level in delivery of fuel to the combat force in that operational area.

“What does it mean?

“It means that we’ve got some significant experience with this airplane now.”

He added that the clearance process has continued with the F-16s have been added to the planes which KC-30A has been cleared to support.

“When US F-16s were in the theater we tanked them. We have a thriving boom business in the area.”

He added that the experience with the F-16s is a good way to get ready for their support to F-35s.

“They are tanking Japanese based USAF F-16s as well and are getting ready to do so for the Singapore Air Force as well.”

As the KC-30A goes through a steady stream of certifications, the USAF personnel involved in certification at Edwards have now gotten used to how best to certify the software boom system used by the KC-30A.

This meant that the recent B-1 certification program happened quite rapidly as the familiarity with the KC-30A has increased within the USAF.

“We conducted a short certification campaign of 12 flights to get the job done.”

The Aussies are participating in the Coalition Air Refueling Initiative (CARI) as well.

This is a USAF-run program of standardization of tanker operations.

This standardization process for tanking is crucial to shape a global coalition capability to support allied tankers worldwide, notably as the combat air force is designed to move to needs rather than to simply be based always at the point of need.

Working with the KC-30A was a first for the USAF for they had not worked with a software driven boom before.

“They went through a lot of test points and a lot of analysis to understand both how the KC-30 worked and how the software boom interacted with the receiver behind it.”

Because the USAF is now familiar with the KC-30A and the workings of its software-driven boom, the certification process for other aircraft can be shortened considerably.

Air Commodore Lennon added: “The test community has done a fantastic job at really narrowing down the requirements for a software driven boom, and when we make software changes to the boom we don’t want to be retesting every single aircraft again.

“We want to be able to assess those changes against the baseline that we already have and get on with it.”

As Air Commodore Lennon put it: “Every tanker needs to be capable of tanking every receiver. That is the goal.”

“We do not want to have IP differences get in the way of that requirement.

“We need to shape a good level of data sharing without compromising the IP of the two companies.

“Software driven booms designed by dissimilar companies will respond differently to diverse operational situations and we need to narrow this difference for operational stability.

“We need as operators to set standards so different manufacturers can design their booms to respond in a predictable, pre-determined manner.

“Designers might shape different approaches via their software, so long as they deliver that common result.

“Legacy booms are mechanical and the operator drove the boom in accordance with standard procedures.

“The boom operator positions the boom to a common point in accordance with common procedures.

“We want to make sure that the software can achieve the same outcome.

“This is especially important where new booms have software driven functions such as automatic disconnect.

“It is important for the receiver to know what the boom will do next.”

We then discussed the progress in the automatic boom being worked with Airbus.

There will always be an operator monitoring what’s going on with the boom, deciding what the boom should do, and when it should do it, but now he can let the boom do all the work of positioning and marrying up with the receiver.”

The KC-30A is a refuelable aircraft so with a fatigue reducing automatic boom, the crew can stay airborne for longer to generate additional operational impact and enhanced sortie generation effects.

Air Commodore Lennon saw other potential impacts on operations as well from having an automatic boom.

“If it can anticipate and react to movements of the receiver aircraft faster than the boom operator can, then you end up with faster contacts. You also potentially end up with more consistent contacts when the turbulence level increases, in cloud or when night falls.”

We then discussed the partnership with Airbus through which the RAAF is working the new capabilities for the now fully operational KC-30A baseline aircraft or Tanker 1.0.

Air Commodore Lennon felt that “the agreement signed at Avalon represents a significant maturing of the relationship with Airbus.

“It was interesting that we declared final operating capability for KC-30A at Avalon and then within five minutes we were signing a cooperative agreement to take the capabilities of the tanker to the next level.”

Both Lennon and Williams saw the maturation of the relationship with Airbus as critical when moving towards Tanker 2.0.

“I think they’ve definitely turned a corner in terms of maturity. They are not just trying to sell airplanes anymore but operating as a global fleet steward.

“They are offering us a menu of choices for how we might modify the aircraft going forward, rather than selling us a single solution.”

We then returned to a topic which I had discussed with the Group Captain last August, namely the advantages of the pairing of the C-17 with the KC-30A.

The Aussies given the vast areas they cover use their tanker as a fully loaded fuel asset and given its significant fuel load maximises the number of receivers that can be deployed over long distances.

This means though that they want to fly with a C-17 to carry the kit, people and support equipment that is displaced by fuel on the KC-30.

Hence the importance of the pairing.

According to Williams there are two clear recent examples of how this works.

“We brought F-35s and Growlers to the Avalon air show and we did so by supporting them with a KC-30A and C-17 pairing. For long range operations, the pairing works very well for us.”

In contrast, for operations within Australia the tanker can be used not only to fuel but to lift personnel and cargo as well in many operational settings.