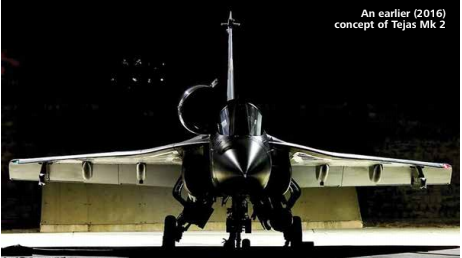 Still in the designing stages Tejas Mk 2 – a vastly improved version of the LCA Mk 1/1A – is being touted by HAL as an ultimate replacement to the Indian Air Force’s (IAF’s) Mirage 2000s being upgraded to -5 standards.

In the process, the Mark 2 variant of HAL’s Tejas LCA will see a transition into the Medium Weight category, from being an LCA as planned initially, with increased take off capability and more hard points to carry sophisticated weapons.

Notably, IAF not only readily accepted HAL’s MK 1A offer with some improvements over the Mk 1 version albeit with the same somewhat underpowered but has also supported its Mk 2 programme which was essentially meant for the Navy but rejected by it citing its unsuitability for meaningful carrier operations.

With the Mark 1 and Mark 1A earmarked to replace the perennially ageing, light weight MiG-21s and slightly heavier MiG-27s, the IAF is now rightfully demanding futuristic enhancements and diversification of Tejas into various stages through its Mark 2 variant.

In fact, with an AUW (All Up Weight) of 17,500 kg Tejas Mk II would have to shed its LCA (Light Combat Aircraft) nomenclature and move into the category of MWF (Medium Weight Fighter). The aircraft will also have state-of-the-art sensors/weapons/equipment mix such as, AESA radar, IRST, new cockpit, upgraded avionics, OBOGS, UEWS, MAWS and the latest strike weapons such as SCALP, Crystal Maze, Spice 2000 and of course, AAMs.

But more than anything else – as would have been noticeable to the observers visiting the HAL pavilion during AeroIndia – Tejas Mk II would also be sporting ‘Canards’.

Canards would not only result in all round improvement in aircraft’s performance and agility, it would lift the Tejas into the category of contemporary non-stealth Gen 4++ multi-role fighters with the likes of Gripen, Rafale, Eurofighter and Su-30/35, etc – a real game-changer for India.

Interestingly, canards were considered for the initial LCA design, but given up due to lack of confidence, especially after sanctions were imposed post India’s ‘Shakti’ nuclear tests in 1998. However, with the indigenously designed and perfected FBW (Fly-by-wire) system, ADA (Aeronautical Development Agency) feels it has the capability now to integrate the canards into the control system of the Mk II version of Tejas.

Be that as it may, it should be clear that designing and developing the Tejas in its new MK II canard avatar wouldn’t be a cake-walk and that it would call for single- minded determination, dedication and devotion to the cause to make it happen in the acceptable timeframes, lest the entire exercise fade into irrelevance due obsolescence setting in even before the project fructifies.

Needless to say, the fully developed and operationally produced Mk 2 version of the Tejas should become available to the IAF before it starts retiring its Mirage 2000s in the early 2030s.

This article was published by our partner India Strategic in May 2019.