As new aircraft enter the combat fleet, there is a clear opportunity to shape new approaches to sustainment for global operations.

This is especially true if the aircraft in question is bought and operated by allies as well as US forces.’

The core promise of the F-35 global enterprise rests on this strategic opportunity.

Fortunately, we have already seen the emergence of the approach with legacy systems, which can be built on as the new software-upgradeable aircraft enter the force.

Allies are not just customers but participants in innovation.

A case in point are the Aussies and their operation of the C-17.

A recent article published on the Australian Ministry of Defence website published on January 26, 2019 provides a look at a case where an Aussie innovated to the benefit not just of Australia but to the entire C-17 operating fleet.

Soon after posting into No. 36 Squadron, Corporal Kelvin Green noticed a problem with the C-17A Globemaster’s paint.

“I look at every aircraft in detail – I can spot a repair and can tell if paint is not going to last,” he said.

Corporal Green noticed paint was delaminating about three months after returning from a full repaint in the United States, instead of lasting five to seven years.

When he realised this was causing an increasing workload, Corporal Green wrote a defect report including how to rectify the problem. 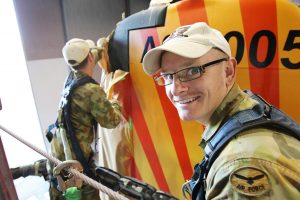 Boeing sent a team of scientists and engineers to inspect the aircraft and test Corporal Green’s theories.

“It turns out I was correct,” he said.

“They took their findings back and made significant changes.”

No. 86 Wing sent Corporal Green to the United States to inspect the first Royal Australian Air Force C-17A painted after the changes.

“It was great to see my report on display for all Boeing’s aircraft surface finishers to see,” he said.

Corporal Green said support and recognition from his chain of command made this possible.

“It’s always a battle convincing people that paint should be a priority as it does affect the aircraft life,” he said.

Corporal Green’s paint knowledge resulted in improved availability and reduced costs over the life of all C-17As.

The citation said his “extraordinary” vigilance and professionalism had a positive impact on the C-17A fleet worldwide.

“To actually receive it is unbelievable; it has still not quite sunk in,” Corporal Green said.

“For my mustering, such a small mustering; it’s an absolute honour.”

Because the C-17 is supported by a global sustainment contract, cross-learning is facilitated as well.

In this video insert from an interview conducted at PACAF at Hickam AFB on February 24, 2014, Jim Silva, Deputy Director, Logistics (A4D), discusses the parts sharing arrangement between the US and the Aussies with regard to the C-17.